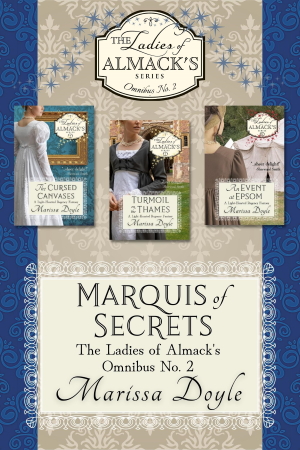 This volume includes the second three installments of the series:

The Cursed Canvases: Who is magically vandalizing the pictures at the Royal Exhibition? When art becomes artillery, the Ladies take notice.

Turmoil on the Thames: When the King’s birthday celebration at Eton is crashed by uninvited guests who threaten to eat the students, it’s a good thing that the Ladies of Almack’s are at hand.

An Event at Epsom: A horse is a horse, of course—or is it? Annabel and the Ladies must attend the races at Epsom to find out.

Buy Marquis of Secrets in the BVC bookstore

When Sally had told the Lady Patronesses that rumors were beginning to fly around London that there was something very odd about some of the pictures at the Annual Exhibition, the reaction had mostly been amusement. But today, on her third visit, Annabel was no longer smiling. Something was very wrong here—and it was being done very deliberately.

“Splendid. Is eleven too early? No? Then I shall see you then. I perceive that my friend is eager to see the rest of the pictures, so I shall say au revoir, ladies.” He bowed and turned back to his companion, who indeed had begun to look impatient. Odd that Lord Glenrick hadn’t presented him or included him in the conversation, though she had finally remembered who he was when Lord Glenrick mentioned his nickname. Lord Rossing had been one of Freddy’s acquaintances whom she’d met once or twice—a typical taciturn northerner, as she recalled, mostly concerned with his horses and his immense pride in his descent. Not the man she would have expected to be viewing the annual Royal Academy Summer Exhibition, but one never knew.

The two men left the room, Lord Glenrick glancing over his shoulder to smile at her once more as they did. When they had gone, Eliza hobbled to the green baize-covered bench and sank onto it with a small groan. “Oh, that’s better. Annabel, isn’t that the man you told me about whom Geoffrey so dislikes? Who is he, again?”

Was that the faintest edge of rebuke in her question? Instead of sitting, Annabel went to examine a nearby painting. No distortions or changes from the last time she had viewed it. She wrote a small zero next to its name in her catalogue and examined its neighbors before answering. “Yes, it is—though I still don’t understand why Lord Quinceton dislikes him. He’s always perfectly charming. And he’s the Duke of Carrick’s heir and brother to one of my fellow Lady Patronesses.”

“You’re going to make me stand up and follow you around if I want to talk to you, aren’t you? And I thought you were kind.” Eliza sighed and made to stand up again.

Annabel relented and went to sit next to her. “I still have to finish looking,” she warned.

“We can finish together as soon as my feet stop throbbing. He’s smitten, isn’t he?”

“I shall now exercise vast amounts of restraint and not hit you with my catalogue,” Eliza said in a long-suffering voice. “That man. Lord Glenrick. Smitten. With you.”

“Oh, no—I wouldn’t say that—” Goodness, was she blushing?

“I would. Are you smitten in return?”

Why was Eliza examining her so closely? “No, of course not! I—I’ve given up on men, I think.”

Eliza snorted. “At your age? Why should you? Hmm. Maybe that’s why Geoffrey can’t abide him.”

“You think so?” Eliza pursed her lips.

Annabel hesitated. Lord Quinceton had left London for a few days to confer with his bailiff at his estate in Gloucestershire after their adventure sorting out her cousin Hartley’s engagement to Miss Pouli. At first she’d been relieved to know he was elsewhere; the memory of how she’d defended him in his very presence to her Cousin Medea still made her squirm.

But that relief had been short-lived, and to her dismay she’d actually found herself missing the wretched man. It was an unsettling realization; just weeks ago she’d told Emily she couldn’t abide the creature. But there was simply no reason to believe he cared about whether or not Lord Glenrick was smitten by her. The idea was quite nonsensical.

“I don’t see why he should,” she said firmly. “Why should it matter to him?”

Eliza opened her mouth to answer, but Annabel forestalled her by standing up. “Are your feet feeling better? If not, you can stay here while I look at the rest of the pictures.”

Eliza seemed to understand she didn’t want to pursue the conversation, bless her. She climbed to her feet with a small wince. “No, but they’ll hold me up a little longer. I should like to see if there are any more pictures of cows with whom you are acquainted.”

Buy Marquis of Secrets in the BVC bookstore