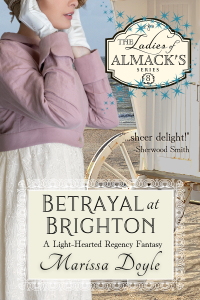 Annabel reluctantly goes to Brighton to investigate the suspicious behavior of her fellow Lady Patroness, Frances, and evade the advances of Lord Glenrick, now the Duke of Carrick. Once there, she finds herself even more reluctantly chaperoning a royal teenager through the high season in the most sophisticated town in England. But keeping a spoiled princess out of trouble is nothing compared to uncovering treason, as the Ladies will discover…

The eighth installment in The Ladies of Almack’s series!
____
Marissa Doyle intended to be an archaeologist but somehow got distracted, so instead she excavates tales of magic and history from the matrix of her imagination. Or something like that. She lives in MA with her family, her research library, and a bossy pet rabbit. Visit her online at www.marissadoyle.com.

Buy Betrayal at Brighton in the BVC bookstore

“But where are we going to find you black gloves to wear now?” Mama wailed. “You leave tomorrow!”

Annabel, her mother Lady Shellingham, and her maid Winters were gathered in Annabel’s old room (fortunately, not the one in the old nursery which somehow still smelled of the woolen stockings Annabel’s nurse used to dry by the fire.) Dresses, shawls, petticoats, and chemises billowed on every surface as Winters carefully wrapped everything in tissue paper and packed it in a trunk, for Annabel was indeed leaving on the morrow for Brighton, the seaside town the Prince of Wales had turned into the most fashionable resort in England, where the beau monde flocked after the London season waned.

If only she didn’t have to.

“My lady could, er, borrow a few pairs from her grandmother,” Winters suggested. “If we sneak into Lady Agnes’s room while she’s in the garden, she will never miss them.”

Annabel caught the humorous gleam in her eyes and winked at her behind her mother’s back. “That’s an excellent suggestion! What time is it? She usually goes outside after her nap.”

“Winters! You know she keeps a list of her gloves, stockings, and handkerchiefs and checks it weekly to make certain they’ve been put away in the correct order, and woe betide her dresser and the laundry maid if there’s one out of place. A missing one might involve capital punish—” She turned, caught a glimpse of Annabel’s grin, and sighed. “Oh, you two.”

“But your host and hostess are. Why are they even going to Brighton if they’re in mourning? There’s probably a town statute against wearing mourning in public there. I wouldn’t put it past His Royal Highness.”

It had been several weeks since Sally Jersey had asked Annabel to accept an invitation to go to Brighton with her fellow Lady Patroness, Frances Dalrymple. Frances had behaved very strangely during their investigation into a blackmail attempt on the king’s youngest daughter, Princess Amelia—in fact, she had lied to include herself in the search for some highly personal letters in the blackmailer’s rooms and tried to take them herself. Only Mr. Almack’s fortuitous witnessing of her action had stopped her from getting away with it.

Annabel understood the necessity of finding out what Frances was doing and why. She understood why she was the logical choice to lead the investigation; Frances had been begging her to stay with her in Brighton for weeks. But understanding all of that couldn’t make her like the idea any better.

At first, she’d thought she wouldn’t have to go after all. The Monday morning after the conclusion of the Princess Amelia investigation she’d arrived in King Street for the usual Lady Patronesses’ meeting, nervously wondering how Frances would comport herself after being confronted in Windsor…only to find that Frances wasn’t there. A hastily scrawled note explained that she had received word the day before that her father, the Duke of Carrick, had unexpectedly died, and that she and her brother Lord Glenrick—now Duke—had left for Scotland.

Sally had been disappointed; regretful for their loss, of course, but regretting too that their stay in Brighton would undoubtedly be cancelled and Annabel’s chance lost. Annabel could not share that disappointment. Spending a fortnight or more in Brighton to spy on a friend she no longer trusted and a man whose advances repelled her was not her idea of a delightful seaside holiday.

Buy Betrayal at Brighton in the BVC bookstore