“Mac” MacTavish impulsively steals his late sister’s neglected children, only to discover it’s easier to handle a clipper in a hurricane than steer two ornery brats.

“Mac” MacTavish impulsively steals his late sister’s neglected children, only to discover it’s easier to handle a clipper in a hurricane than steer two ornery brats. What he needs is a nanny until he can take the children back to his parents in America.

Knowing herself to be too plain and large to attract a husband, Bea Cavendish has settled for a quiet life of feathering her father’s nest–until he dies, and she’s left with an estate she doesn’t know how to manage. Alone and terrified, she doesn’t know what to make of the very big, very angry man appearing at her door with two adorable hooligans in tow.

Does she take in this ill-tempered stranger and his children in exchange for learning what she needs to know? Or is she in danger that this recklessly ambitious man might teach her more about life than which fields to plant?

“Not that way, ye keelhaulin’ son of a sea serpent!” Lachlan Warwick MacTavish shouted, jumping to the dock ramp to grasp the rigging on a crate of cotton in danger of a watery fall. Holding the heavy crate in position, he waited while one of the crew hastened to right the ropes and swing it to a safer landing.

Below, his father’s new London business agent appeared mildly startled by Mac’s sudden, ungentlemanly leap into action. The man drew the frill-bedecked maiden who stood at his side to a more appropriate distance while she covered her ears with gloved hands to avert any further depredations on her delicate sensibilities.

Swearing beneath his breath, Mac shifted the heavy crate to show the inexperienced cargo man the ropes, yelled at his first mate to keep a closer watch on the unloading, and, stretching his muscles against the unusual restraint of a coat, grudgingly returned to the elegant pair waiting out of harm’s way.

Gulls screeched, men cursed in the rigging as they brought down a storm-battered sail, and Mac thought he would far prefer being on his ship than here, discussing pleasantries with a money counter and his fashionable daughter. He had no use for ladies, and they had no use for him once they had his measure.

That seldom took long. This one already wore the look of distaste he generally encountered on feminine features. He’d never quite managed the languid, fastidious elegance of a gentleman.

The delicate lady in her many petticoats edged away from his overlarge presence. Impatiently, Mac balled his fists and ignored her, leaning down to hear the prattle of his father’s agent as they traversed the dock toward the safety of the street.

His mind, though, took flight to a dock not far from this one, a dock at a shipyard boasting a spanking-new clipper with masts raised, fittings and final coats of paint ready for installation at the new master’s command. His command. Finally.

“Your father says you have a canny head on your shoulders when you’re inclined to use it,” the agent was saying.

“Aye, well, we have a wee bit of disagreement on those uses from time to time.” With iron determination, Mac tempered his impatience to see the ship he’d commissioned. He had a dozen duties ahead, and one was humoring this old man. He needed all the goodwill he could summon to obtain the agent’s aid in stocking the new vessel Mac would be sailing home.

“Well, you’ve brought me a fine shipment, from all reports. Have you a list of goods you’ll be wanting to take back?”

“And I’d be a fool not to, wouldn’t I?” Eyeing the fine horse waiting for him at the curb, Mac paid no heed to the female swaying beside him. Women—ladies, at least—weren’t on his current list of priorities.

Later, when he had time, he would divert his restlessness with the company of a tavern wench.

This time next year, it would be his own ship cutting across the ocean, carrying profits to his own bank account, rather than his father’s. It was all very well and good to know he’d someday inherit his father’s wealth, but not if the wealth depended on an enterprise that was expiring of old age and moribund thinking. His father couldn’t see that the future of shipping lay in speed.

“You say your sister’s here in London?” Cunningham inquired congenially, satisfied that he was dealing with a sensible businessman. “I’d thought you Americans stayed to the other side of the pond.”

“We’ve family up and down the coast on two continents. Safer than keeping all our eggs in one basket.” Mac didn’t mention that far from being a close-knit family, they were a closemouthed, stubborn, cantankerous lot on the whole. The MacTavishes thought the Warwicks, the maternal side of his family, were a lot of foppish ne’er-do-wells; the Warwicks thought their Scots relations by marriage were mere shopkeepers. And their American relations—well, they’d never been forgiven for the Revolution.

He didn’t intend to call on any of them except his sister. Eight years his junior, she’d followed him like a little lamb through childhood, tormenting him in front of his friends, making him laugh like a simpleton in private. He adored the little brat, when she didn’t annoy the devil out of him.

As Cunningham and his daughter climbed into their carriage. Mac offered his hand to his father’s agent. “It will be a pleasure working with you, sir. Shall we meet tomorrow to discuss purchasing?”

The lady nodded stiffly and looked away. She had no doubt come hoping for an aristocratic, wealthy gentleman. She’d found an uncouth, bulky American instead. Accustomed to the reaction, Mac waited to be rid of the pair. He needed to get back to the unloading, try to clean himself up again, and then make his way to Marilee’s London town house.

Mac turned and strode back to the dock, shouting a curse at one of the men lollygagging in the rigging. The idea of joining Marilee and her viscount husband for a stilted evening of polite conversation galled him, but family came first.

Be the first to review “All A Woman Wants” Cancel reply 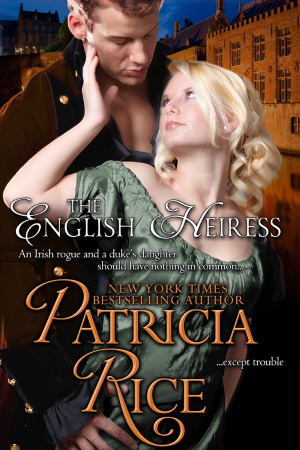