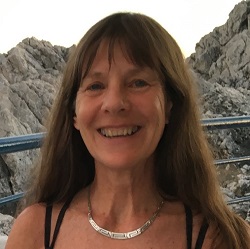 Today I am letting Sara speak for herself via her BVC author blurb:

Sara Stamey’s journeys include treasure hunting and teaching scuba in the Caribbean and Honduras; backpacking Greece and New Zealand; operating a nuclear reactor; and owning a farm in remote Southern Chile. Now resettled in her native Northwest Washington, she taught creative writing at Western Washington University for many years. She shares her Squalicum Creek back yard with wild creatures and her cat, dog, and paleontologist husband Thor Hansen.

Sara Stamey’s Islands, now in ebook from Book View Cafe, is set in the Caribbean and packed with adventure, vivid characters, and intricate plot. It’s also romantic suspense with a drop of psychic wonder. “An archaeologist investigating petroglyphs ends up diving for sunken treasure and investigating a cult murder.” 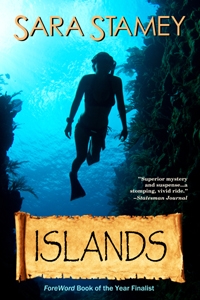 A: That’s just one reason I’m glad to have found a home with Book View Café—I can follow my muse in storytelling without worrying about a strict category niche. I wrote an early draft of Islands when I was living in the Caribbean, working as a scuba instructor and guide, so the location was definitely the inspiration for the story. It competed for role as “main character” with my fish-out-of-water archaeologist from the Pacific Northwest. Susan Dunne’s character then drew a lot from my own culture shock, moving from a cool, laid-back clime to the hot, revved-up pace of a St. Thomas-like tourist island. Then I realized that the demolishing of her preconceptions would be a big part of the plot. And when I stumbled upon evidence that the Vaudun (Voodoo) was active in areas of the island, we were off and running.

A: I originally wrote Islands as a stand-alone novel. Susan and other characters insist there is more to tell, so I’ve started a sequel set in Belize and Guatemala, where I’ve also spent time. I’d love to hear from readers if they’re interested, and want to take part in a drawing to name a new character.

A: I recently found the original version of Islands, which sat in a box for years before I resurrected the novel idea. I barely recognized the story and style! So, happily, my writing has evolved—chiefly, in deepening my characters and themes. What I hope I haven’t lost is the passion for an exciting story. I’m still a fan of adventure, exotic locales, and romantic tension—I confess a weakness for roguish, hunky guys my female characters just can’t resist. Sparks do fly! 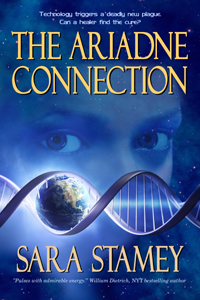 A: Research for me is essential, and essentially creative. When a story idea takes hold, I love to dive into research, most of which never finds its way into the novel, but which helps me flesh out the worlds. Over the years, I’ve learned about such topics as geomagnetism, African religion and Caribbean Vaudun, bioelectricity, colonial shipwrecks, shamanic healing, and much more. Beyond collecting information, research fuels the “what if” questions that help create plot and more.

For example, when writing a novel based on my time homesteading on a remote Southern Chilean island, I collected tales of regional mythology and history, and later took an oil-painting course because my main character needed to be a painter. Mixing oils was a revelation about perception and color, and led me to read up on alchemy (painters historically ground minerals for their paint colors, and believed some materials contained alchemical properties). That aspect became a major plot and thematic element. BTW, that novel is now being resurrected for a major revision….

As for concepts in my writing, starting with my early Cybers Wild Card science fiction series from Ace/Berkley (now being reissued in new editions by Book View Café), I’ve been examining the effects of new technology on human culture and values. I’m still fascinated by the issues raised—there’s always a tradeoff when new ways are adopted to replace older traditions. In Ariadne, I take the current “connected generation” to its next step and imagine the consequences of media saturation, both biologically and culturally. Lately, I’ve realized that although my novels range widely in genres, there is always a strong element of environmental awareness and concern. But don’t worry—I keep the story and characters in the forefront, and let these ideas emerge from the context.

A: My students constantly surprised me with their creative visions, and I’ve been grateful to stay connected with their fresh young energy and different perspectives on the world. I value young people’s openness to experience and experimentation, both in their writing and the way they live.

Before I retired from teaching, I noticed that many students seemed concerned with challenging labels of identity and finding ways to navigate their “wired” world, which is fascinating.

A: I call myself a “method writer,” and do live out a scene as I write. During a particularly intense action or emotional scene, I’ll break out in a sweat sitting at the keyboard—a real workout. When I take breaks for a walk or bike ride, I talk with my characters about what they’re going to do next. I love it when I have blocks of time to really immerse myself in the world of my novel-in-progress.

A: Even as a child, I gave my mother gray hairs when I’d sneak out the bedroom window at night to wander the forest and lake near our home, soaking in the magic of the moonlight or a storm. The urge for adventure was just too strong to resist. I’ve been told I have a “Hemingway complex,” needing to travel and experience the active world in order to gather story material. Living in different countries and cultures has given me so much in terms of broadening my perspectives and filling my senses.

That said, I’ve now reached the point where I’m happy to have a home, garden, and special people/animal friends I share with my husband Thor. I still love to travel, but figure I’ve got enough story material for a while—now I need more time with rear applied to chair to get words on the page.

A: As I mentioned, I see that my voice has evolved over the years, and I hope it’s the different voices of the characters themselves that dictate the tone. I do tend to create characters who are rebels against the norm, and who are outspoken—which I am only in my writing! In addition to the technology/human identity issues I circle around, I do tell stories strongly grounded in outdoor settings, so environmental issues inevitably creep in as backdrop to the characters’ lives and choices.

A: The Ariadne Connection is my most ambitious novel to date, as it does weave together a lot of threads. The inspiration grew from an extended backpacking trip around the Greek islands and mainland that was a fulfillment of a lifelong fascination with Greek mythology and culture. I ended up falling in love with the rugged island of Crete, camping in the ruins of ancient mazelike settlements. I felt I was somehow channeling the spirit of Ariadne, who gave Theseus the thread to find his way from the labyrinth after slaying the Minotaur.

My Ariadne became a near-future Greek scientist who discovers she has inexplicable healing powers and is dubbed “Saint Ariadne” against her will. I needed to learn about such healers, and was lucky enough to be taken on as a student by an anthropologist at our university who has traveled extensively to study and practice shamanism with native practitioners. In my hands-on practice, I had a lot of eye-opening experiences. I wanted to weave those spiritual/cultural practices into speculative science, which led me to studying the work of Robert Becker, a medical doctor who did research with the U.S. armed forces into bioelectric healing and pushed the boundaries between mind and matter.

The final thread pulled in research about geomagnetic reversals, another cycle of which the world seems to be moving into presently. My husband, a geologist/paleontologist at the university where I also taught, helped me get that aspect clarified. Basically, I’m headed toward territory explored by some philosophers and scientists: If there is an encompassing energy field that connects all life on earth and allows for interaction, how does that work? What are the consequences of our electronic emissions blanketing the earth and our bodies?

All of these ideas lurk beneath the active thriller plot, so I hope to entertain while raising questions.

A: Before I was old enough for school, my grandmother babysat, and we often played a card game called “Authors.” I was fascinated by the images of Wordsworth, Poe, and Shakespeare, and decided I wanted to be an Author, too. I was already driving my family crazy on car trips, making up stories and recounting every detail of colorful dreams. Now I hope to take my readers traveling with me!

A: My latest novel Pause, women’s fiction/mainstream, is quite a departure from my usual genres. It started with a journal I was keeping during a difficult midlife journey of divorce from an abuser, along with epic hot flashes, a new teaching job, and more. Finding the humor in such crazy times, I found relief in laughter. The novel uses “Dear Diary” entries from my fictional character Lindsey Friedland as she navigates the absurdities of midlife dating along with tackling more serious issues of ageism, sexism, family legacy of abuse, and wider environmental concerns as Lindsey reclaims her passion for environmental journalism. Originally I didn’t intend to publish it, but with all the women’s voices now speaking out about issues formerly ignored, it seemed time to add Lindsey’s voice. 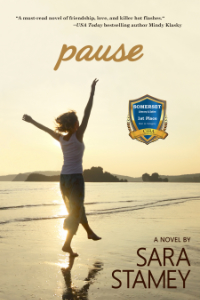 I’m surprised and gratified by the positive responses to Pause that I’ve been getting from readers and reviewers, among them Kirkus Reviews: “Lindsey herself is an appealing and capable hero, both intelligent and relatable. A solid, engaging tale about the importance of self-knowledge.” And the novel is a 2022 selection of the International Pulpwood Queens Book Club, which puts terrific energy into supporting its authors.

But never fear, I’m not abandoning my usual suspense/speculative writing, as I’m working on a sequel to The Ariadne Connection, and the new Book View Café edition of Double Blind (#3 in the Cybers Wild Card series) will be released this fall.

Thanks, Kathi, for your thoughtful questions. And thanks to all the author members of Book View Café for their wonderful support.

Editor’s Note: Sara’s novel Pause is on half-price discount for another week at www.bookviewcafe.com

PrevPreviousThe Mathematics of Writing: All Art Forms Are Not Created Equal
NextNew Worlds: Slavery in FictionNext