Photo by Element5 Digital on Unsplash

I’ve been in a mad scramble of working and writing and list-making and shopping and pie-baking and house-cleaning and several dozen other things that I can’t even remember right now, so I have no crazy island adventures to tell you about this week…whoever even shows up to read a blog post on (American) Thanksgiving Day, that is! 🙂 We are hosting this year, a smallish group (8 around the table), but this is still larger than any gathering we’ve had since before the pandemic started. We’re a little bit out of practice, shall we say. END_OF_DOCUMENT_TOKEN_TO_BE_REPLACED

I discovered Georgette Heyer in high school, after reading an entire issue of the fanzine Niekas devoted to it, somewhere around 1967-8. At that time I hadn’t yet read Jane Austen, though I’d loved historical novels ever since I checked out Mara, Daughter of the Nile in grade school. My favorite by ninth grade was Annemarie Selinko’s Desiree, based on real people during the Napoleonic period (though I was to discover it was every bit as romanticized as most of the memoirs penned by the surviving principals later on) so I was instantly intrigued.

The first Heyer I read was A Convenient Marriage, and as Horry was a couple years older than I  (she was all of seventeen) I had no problem with her romancing a world-weary Earl in his mid-thirties. Seventeen was so old and sophisticated!

From then on I had to read them all. My library only had four or five, so for several weeks I walked the three miles to the stop for the downtown bus, which was almost a two hour ride one way, to check the Los Angeles Main Library, where I found a gold mine—they had everything, even the ones she later suppressed (though I could immediately see why, young as I was).

I was thoroughly entranced.

END_OF_DOCUMENT_TOKEN_TO_BE_REPLACED

We all have those days when you stare at the computer screen for hours and anything you try to type looks like Old High Marsian.

My muse is on walkabout.

Mental exhaustion I tell myself when this happens.

Too many things to do so I can’t think. Yeah, I haven’t cleaned the oven since the last time I did this. Like yesterday.

I haven’t been lectured by my college roommate that trying to write fiction is useless and degrading. Unless it’s literary fiction. END_OF_DOCUMENT_TOKEN_TO_BE_REPLACED

I hurt my hand this week.

It’s a long and sordid story involving using a winch to raise a 200+ pound wood lathe and then letting go at an inopportune moment. The crank whizzed around and caught me at the base of the thumb.

Poinsettias with their gaudy, profuse colors ranging from scarlet to bare white, are hard to resist this time of year. When lined up in rows on Safeway or Target shelves, they blast color into the gray winter day. Poinsettias don’t produce flowers, but instead bright bracts, in the way of bougainvillea and bromeliads. In cultivation, they require at least 14 hours of darkness for the leaves to develop their crimson shades. END_OF_DOCUMENT_TOKEN_TO_BE_REPLACED 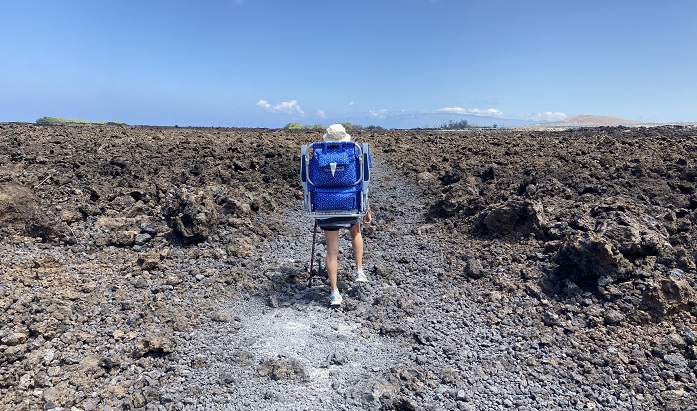 Join Thor and me as we trek across a lot of lava on Hawaii’s Big Island and learn about the geology of the islands.

NOTE: Thor and I decided on a quick trip to Hawaii’s Big Island to stretch out summer a bit as our gray, rainy Pacific Northwest winter was closing in. The airline and all venues in Hawaii are being super careful with Covid precautions, and it was a wonderful getaway. If you didn’t catch my blog series about our first Big Island trip, it started April 24, 2021, and you can catch up on the full adventure, including a volcano, petroglyphs, snorkeling with wild dolphins, and a night swim with manta rays. And I promise I will finish the Retro Italy Vacation series soon.

You can’t let a little thing like hiking across broiling, sharp lava fields keep you from some amazingly serene coves for picnics and snorkeling! The native Hawaiians apparently ran barefoot over the jagged lava fields on the Big Island. I am grateful for shoes. END_OF_DOCUMENT_TOKEN_TO_BE_REPLACED

END_OF_DOCUMENT_TOKEN_TO_BE_REPLACED

Here’s more on the background research I did into life on the “home front” during World War I for What Lies Beneath.

With the clarion call to American women to save food at home so that the starving of Europe and the troops fighting the Kaiser could be fed, 1917 could be called the year of the canning jar…sort of.

It started in the spring. American women were exhorted to plant gardens and preserve their crops, and by July, the women’s magazines blossomed with advice: July’s McCall’s article “Uncle Sam’s Kitchen Brigade” gave a detailed list of how each type of garden bounty could be canned, both fruit (apricots, plums, berries, and cherries) and vegetables (bean, peppers, asparagus, cabbage spinach, cauliflower, carrots, and beets.) END_OF_DOCUMENT_TOKEN_TO_BE_REPLACED

While out for lunch with my youngest daughter, we beheld a gathering of blue and gold Macaws apparently chatting while their custodian is having a meal at Boulanger.

They are not tethered in any way, nor was their guardian anywhere in sight. He (or she) had gone into the restaurant for a bite … which is what would happen to any one brazen enough (and naive enough) to attempt to steal these glorious birds. Those beaks can crush a Brazil nut with no problem. Just imagine what they would do to sticky fingers.

My daughter noted that the truck matched the color of the Macaws’ tail feathers. A bold fashion statement.

We spent several minutes inventing alternatives to someone having driven to Boulanger with birds festooning their truck. Perhaps the birds didn’t arrive on the truck at all, but were flying over when they saw a rest stop whose color offered the appropriate camouflage. After all, they blend right in.

Perhaps there is no human driver and the birds are aliens out for a Saturday visitation and who did not realize that the chameleon circuit on their vessel and EVA suits had failed spectacularly.

I suppose we will never know.