Some time ago a friend tossed me an idea “challenge” — a story about a superhero granny whose weapons were knitting needles, and a hospital orderly sidekick.

It sounded terrifyingly improbable, but the gauntlet had been flung, and I sat down with the idea and stared it down. Superpowers. Knitting needles. Granny. Retirement home. Orderly.

I wrote the story. It was unexpectedly luminous, in the end — it took place in this retirement home for superheroes, and concerned a cranky old dude who could do nothing but complain after an accident rendered his cape unable to fly—thus making his superhero days (such as they were—he was never of the first rank) clearly and completely over.

Except that it also concerned another inmate of the home, a granny who examined the cape and realised what had gone wrong, readied her knitting needles, and asked an orderly named Eddie for red yarn to remedy the situation.

I am not going to spoil the rest of the story.  It is called “The One About One More Time”, and it is part of Val Hall: The Even Years, Book I of the Val Hall series (the second book, The Odd Years, is just out).

But let me go back to those small things from which big things grow… because when I first wrote about Eddie… I did not know who he was.

END_OF_DOCUMENT_TOKEN_TO_BE_REPLACED

Lessons in Enchantment
School of Magic 1
by Patricia Rice

The daughter of an earl, Lady Phoebe Malcolm Duncan has the ability to talk to animals. She longs to be a veterinarian, but education requires more coin than she possesses. When the walls of her home come tumbling down, she has to take two steps back — to servitude.

END_OF_DOCUMENT_TOKEN_TO_BE_REPLACED

There are some old, old roads in the world. The Romans believed that the Via Domitia was the path of Heracles’ adventures in the Greek legends.This did not keep them from paving it so that it could unite their empire from Italy to Spain. It was one of the most important roads in the ancient world.

There are pieces of it all over, some of it under superhighays used by cars and trucks. The Romans knew where to run a road, and often we cannot improve on them. But this bit is especially cool. This is downtown Narbonne, once the Roman city of Narbo near the Mediterranean in France. Doesn’t this thing look like a swimming pool?

But no. This is right in the center of the old city. There’s a restaurant, under the awning visible in the center. Those things that looked like tightly corralled sheep are actually stacked cafe chairs and tables, waiting for a warmer day so that you can dine outside. The large white building to the left is a discount department store — see the cheap blouses in the window. And here is a piece of the Via Domitia in the main plaza. In the 90s the city fathers realized they had a tourist site here, so they tidied the site up with mosaic, added the verge to keep people from accidents, and stairs so you can go down and stand on the road that the Romans used. This is how history is around here. It’s in museums all right. But it’s also right here in the middle of town, so you have to step around it if you want a cup of coffee.

The husband, poet and thus master of acerbic one-liners, finally has a Twitter page after I pestered him about it. His most recent tweet regarded his dismay that, even though we are homebodies anyway, sheltering-in-place being a lifestyle we embrace, the worst thing about it was that he had to listen to the President every morning.

I, on the other hand, rather enjoy hearing what our chief of staff has to say, because every time he opens his mouth he sinks deeper into the muck with which he has surrounded himself. While I am skeptical of polls, I do appreciate those that show his approval rating in the tank. What saddens me is when I see posts from acquaintances and family, pointing out that he is a great man doing a great job. All in one or two-syllable words, which are the only words he can say. Three-syllable words just confuse him.

These are intelligent people. They are conservative, religious, hardworking. We share many things: love of English Mastiffs, love for family, a high school class. I’m sure they are just as flummoxed by my left-leanings as I am by their right ones.

END_OF_DOCUMENT_TOKEN_TO_BE_REPLACED

This is the beginning of week 2 staying at home. Draper Labs (my employer) told us to work from home starting last Monday. END_OF_DOCUMENT_TOKEN_TO_BE_REPLACED 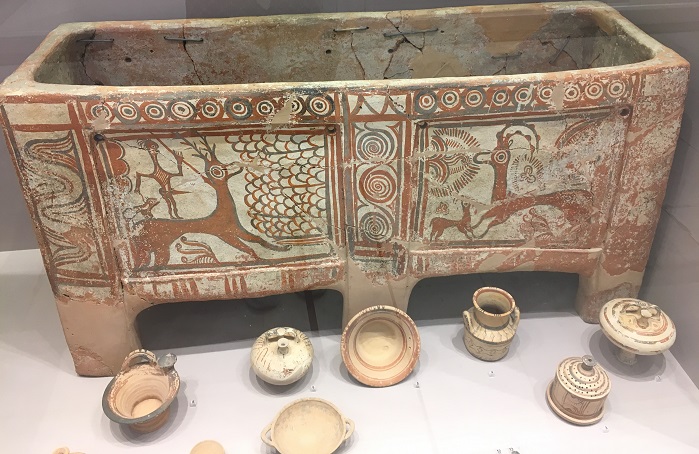 Join Thor and me as we visit a Minoan cemetery and admire the painted larnakes — earthenware caskets — and grave offerings in museums on Crete.

NOTE: Of course, Thor and I had to make another trip to Greece, as he’s fallen as much in love with the islands as I am. This time, in addition to other island-hopping, I wanted to return to Crete after 37 years. My first months-long trip was as a hippie backpacker, camping in the ruins and falling under the spell of the mysterious, vanished Minoan culture. This time, I got to introduce Thor to “glorious Kriti” and research more settings for my novel-in-progress, THE ARIADNE DISCONNECT. This new blog series started October 19, 2019, and will continue every Saturday.

If you’ve been following this blog series, you’re aware that there is very little written history about the Minoans, so our knowledge is pieced together by experts from physical evidence of archaeology. I’ll discuss sacred rituals and artifacts in next week’s post, but the consensus seems to be that the Minoans honored the sacred forces of nature, as well as venerating an Earth Goddess similar to those worshiped in much of the Middle East of the time. They did not build elaborate temples or tombs such as those in Egypt, but in the early stages buried their dead in natural caves or group graves. Later they developed cemeteries with chambers to hold the larnax casket with the body, accompanied by grave goods. As Arthur Cotterell puts it in THE MINOAN WORLD, the dead one “has gone to the last resting place within the full bosom of the mother-goddess.” (pg. 184) END_OF_DOCUMENT_TOKEN_TO_BE_REPLACED

These days, the word “trial” calls to mind a courtroom, a judge, learned people arguing about evidence and the law.

But that’s not the only way of doing things.

Most people will have encountered the idea of trial by ordeal in the context of European witch-trials, as that’s where it hung on the longest. It isn’t just a European thing, though; we also find it in the Middle East, India, and parts of Africa. The specific manifestations vary wildly, but the general concept is that you make the accused do something dangerous, and if they survive or are unharmed, then it’s proof that they’re innocent of the crime — usually something serious, like witchcraft, murder, heresy, or adultery. (And yes, it says something about a society when they put adultery on par with those others.)

END_OF_DOCUMENT_TOKEN_TO_BE_REPLACED

Over my life I have seen, and occasionally been affected by, a lot of crises and disasters beyond my control. I have been scared, knowing that there was nothing much I could do to protect myself and the people around me.

I grew up during the Cold War, when every so often the U.S. and the Soviet Union rattled nuclear swords at each other. I recall watching a TV show about radiation poisoning when I was maybe five or six, a show that, conflated in my mind with the Berlin Wall, shaped itself into a recurring dream and underlies my story “Three O’Clock in the Morning.”

I’ve been through a number of hurricanes on the Gulf and Atlantic coasts, though living far enough inland not to suffer more than a power outage. I was in Wichita Falls in 1979 when a mile-wide tornado tore through town. It didn’t harm me (except for the power outage), but I worked disaster relief and met plenty who suffered. The fires in Northern California get worse every year and I live in earthquake country.

I remember when AIDS was out of control and nobody knew where it came from. For that matter, I remember when polio was everywhere and there was no vaccine as yet. I was a little kid, but you picked up the fear from adults. I have friends who had polio as kids.

I’ve been unemployed during recessions and watched all kinds of things fall apart. I’ve seen government incompetence and way too many unnecessary wars.

But I’ve never seen anything like this Covid-19 pandemic. I suppose the 1918 flu is the only real counterpart in recent history. END_OF_DOCUMENT_TOKEN_TO_BE_REPLACED

Yes, I’m splitting this one. When you spend a morning playing with galaxies and dark matter, you kind of need to give them their own space.Um. So to speak.It was Mike Brotherton‘s day to lecture again and he picked up this morning more or less where we left off the previous night.

Galaxies are fascinating.The first attempt to decipher one – ours – was Herschel’s, done through one of those “Arrrr, matey” telescopes way back in the 1700s. It was done purely by optical observations. Assuming a uniform distribution of stars we would see an “Amoeboid” galaxy, shapeless and formless, containing a given number of stars. It assumes a sun in a center and looking out over a flat plane – the “grindstone model”.

But there are better strategies to explore the size and structure of the Milky Way.

1. select bright objects you can see throughout the galaxy and trace directions and distances

2. observe objects at wavelengths other than visible to circumvent problem of optical obscuration) and catalog directions and distances – more useful to utilize wavelength like radio or x ray or IR to get more information

Okay, but we’ll get to that.Our morning was spent up in the Vedauwoo area at something between 8000 and 8300 feet (heard conflicting reports on this from locals, will have to nail it down later). I was dithering about whether to go or not, what with the troubles I’ve had acclimating to the low humidity and high altitude of the place, but then finally decided to go anyway and try it and see how I felt when I got up there. They said there were picnic tables and if nothing else it would be pleasant to go and take some interesting photographs and just sit there in the shade of the pines.Turns out Nancy Kress and I both decided, about one third of the way around the loop trail, that we had had enough, and returned to the staging area to wait for the others – we probably did a respectable two miles, counting there and back, but the sun was something fierce and despite the slatherings of sunscreen I didn’t quite trust my Viking-pale skin not to turn on me – and there seemed to be a distinct dearth of oxygen in the air when it came to physical activity. So I took a lot of photos, had a nice walk, and then we all came back to the residence for a round of showers and went off to lunch at a nearby Mexican place. END_OF_DOCUMENT_TOKEN_TO_BE_REPLACED