Poinsettias with their gaudy, profuse colors ranging from scarlet to bare white, are hard to resist this time of year. When lined up in rows on Safeway or Target shelves, they blast color into the gray winter day. Poinsettias don’t produce flowers, but instead bright bracts, in the way of bougainvillea and bromeliads. In cultivation, they require at least 14 hours of darkness for the leaves to develop their crimson shades. 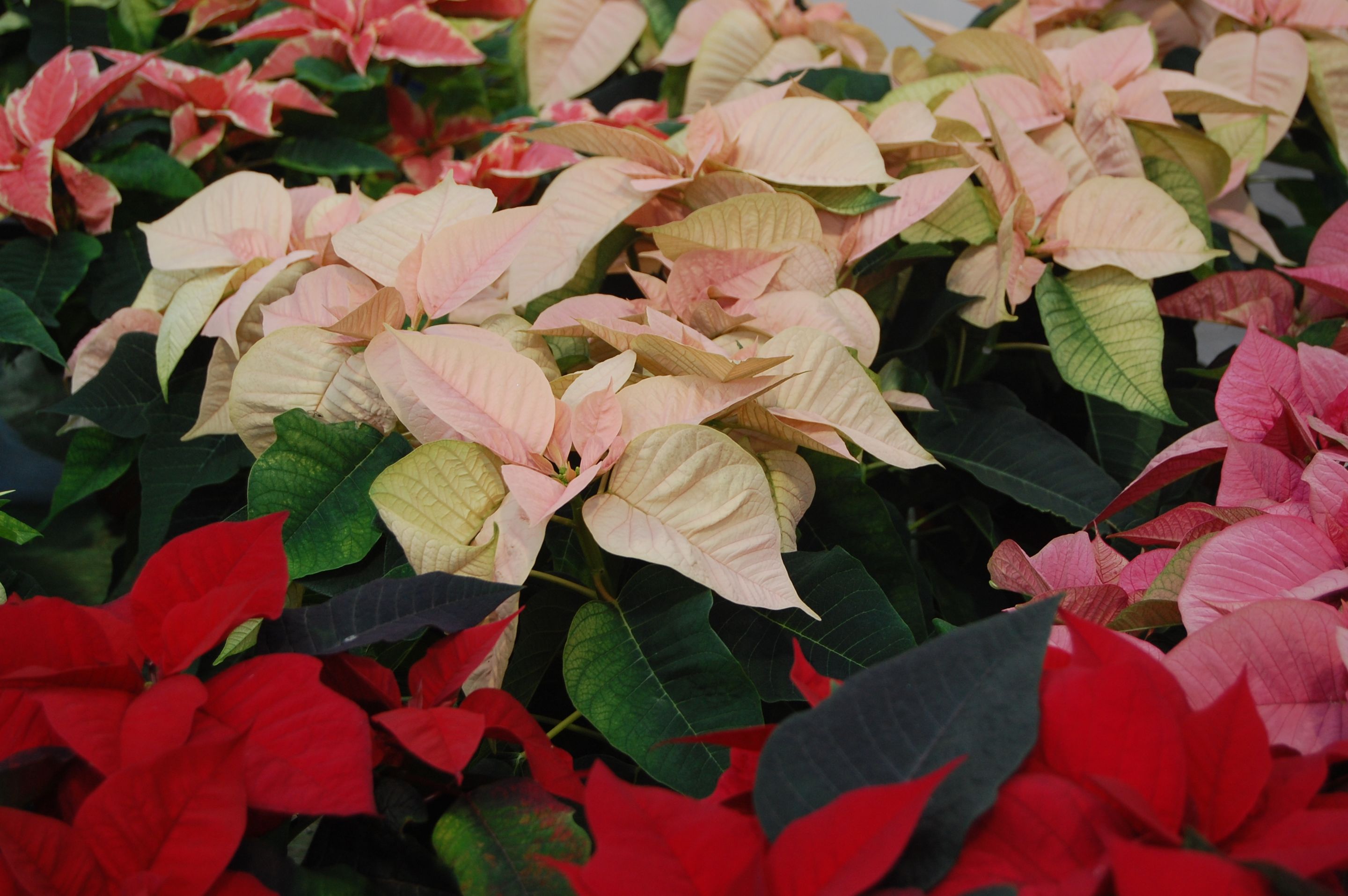 Native to Central America, these brilliant shrubs were imported to US greenhouses by the early 1800’s. Specimens were shipped by the first US minister to Mexico and botanist Joel Roberts Poinsett—thus the name. The shrub became a symbol of the Christmas period in Mexico when a young girl, too poor to purchase a gift for Jesus’ birthday, followed an angel’s advice and gathered roadside weeds for the church. When brilliant red “blooms” appeared, as if through a miracle, the lowly poinsettia, known thereafter as flor de Nochebuena (Christmas Eve flower) in Mexico, has become a standard prop for Christmas mass. Long before this decorative application, Aztecs used the bracts for medicine and red dye. Wikipedia.

The grandson of an enterprising German immigrant Paul Ecke Jr came up with the idea of sending free plants to television stations to display during the holidays.

Having received many free poinsettias from various hospitals where I worked over the years, I found them kind of sad. They are beautiful and eye catching; they make splendid gifts, but their lives are short; when the bracts are gone they stand self-consciously green, like runner-up modeling contestants. Without some effort on the part of house plant lovers, their showy beauty will never come back, even if you can keep them alive and free of bugs.

But the amaryllis. Ah, how gorgeous and simple, startling and fragrant (something poinsettias lack).

In writing this, I was interested to find that what we know as our holiday amaryllis is actually only one member of the genus Hippeastrum, a huge collection of flowering bulbs native to South America and faithful winter bloomers. Amaryllis is a genus all its own, originating in the Western Cape of South Africa, and prefers to produce its flowers in March. 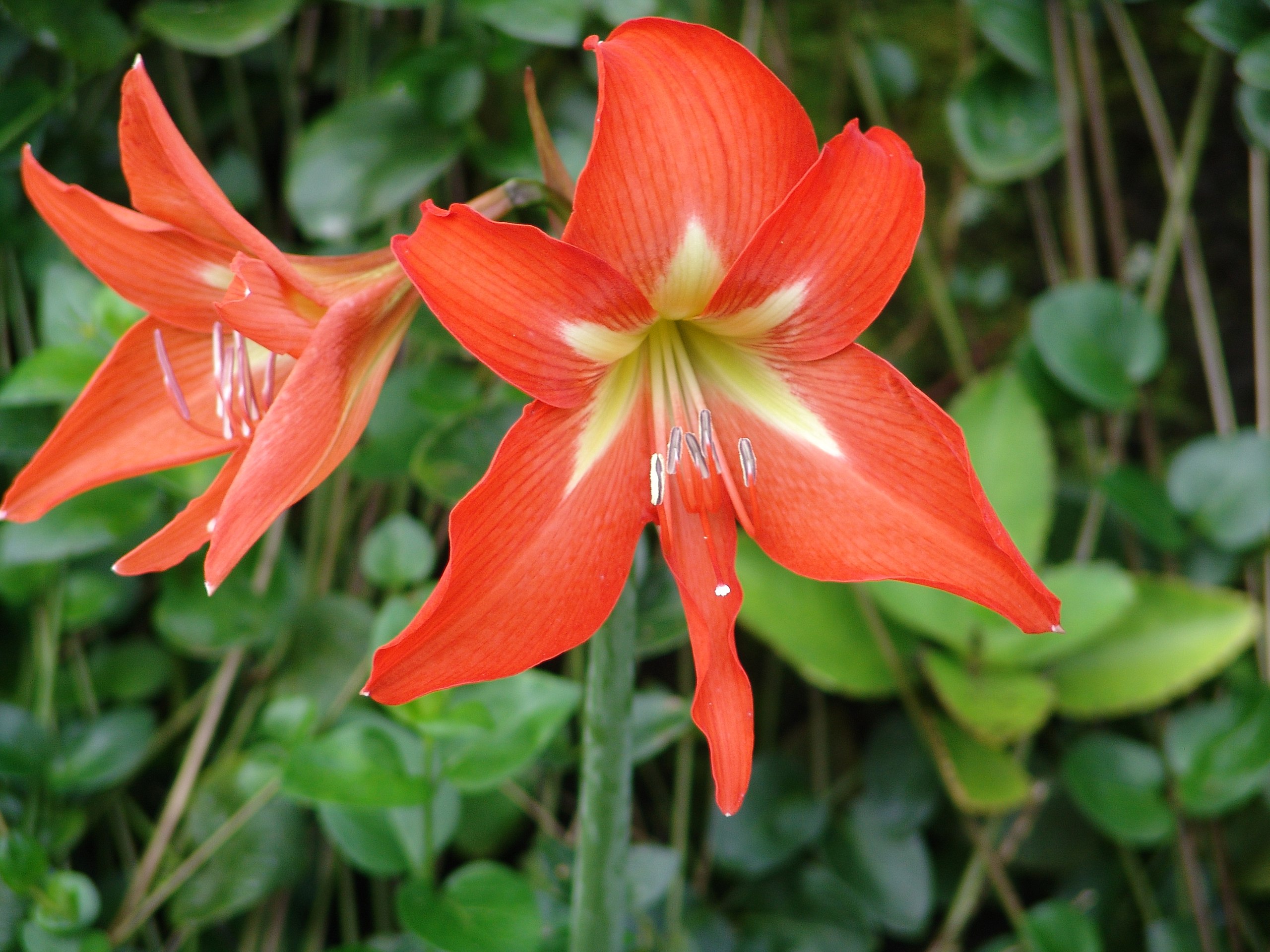 Oh well, Amaryllis, besides being the name of Marian’s piano student in The Music Man, derives from the name of a shepherdess in Virgil’s Eclogues. It means “to sparkle”. I rather like that. At late as 1987 the controversy over the origin of our popular bulb was settled and botanists accepted its origin from Hippeastrum, the amaryllis moniker has stuck.

I purchase amaryllis bulbs every fall, generally in November. They aren’t cheap, but the color and relatively long life is worth it. Last year was the first year I didn’t have to buy any, because I dutifully put all the year-before bulbs in our little back deck refrigerator for hours of cold and pitch black. Two of them bloomed. Until then I had never had such good luck.

In Oregon my bulbs don’t die back over summer, as they are supposed to. Probably too much watering, as I habitually water the ornamentals on our deck and the amaryllis are mixed in, steadily showing their long spear-like leaves. It’s hard enough for me to withhold water from my succulents, but to restrict the bulbs even more than that is, for me, seemingly impossible.

So this year I ordered three bulbs, each a different cultivar. But I have one two-year old amaryllis, a steady but beautiful bright red, poking two spears from its warty-like bulb. I have great hopes for that guy, who will join the showy, shiny newbies and share its hardy stems.