While I was fussing about what to write for my Sunday blog with no tangible result, the Saturday New York Times Crossword provided inspiration. 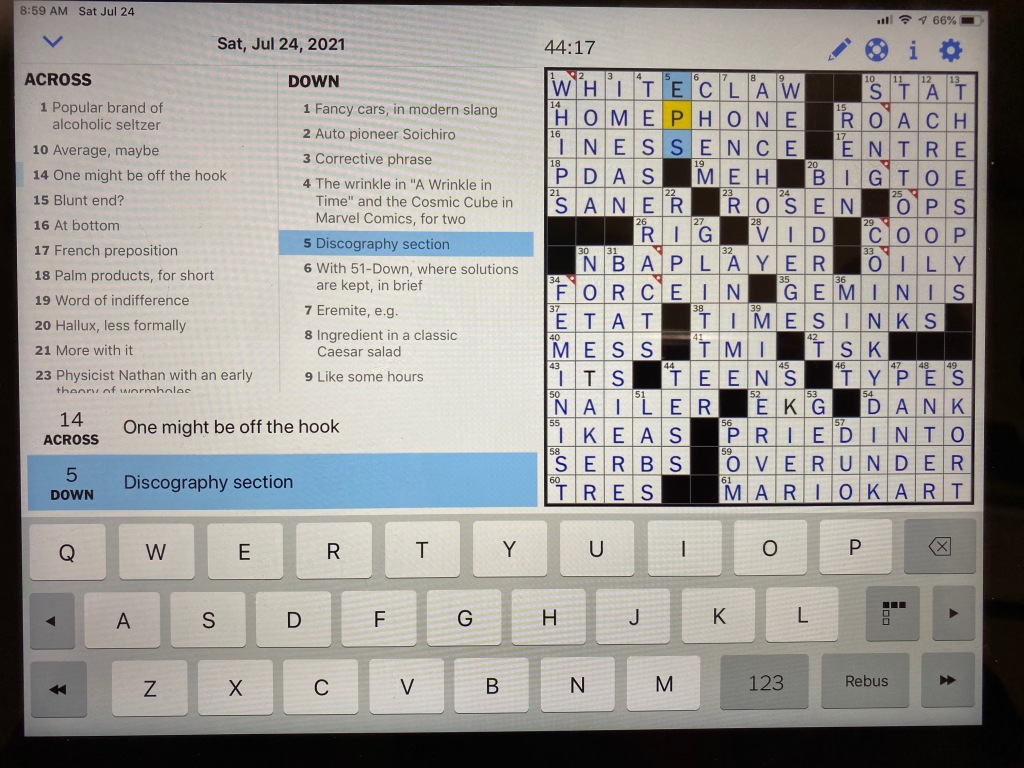 Saturdays are the most challenging puzzles; long answers, obscurities, puns with an endless variety of results. This one irritated me, largely because of the usual–cutsy Gen-X locutions, sports references, models that I’ve never heard of. Also my favorite (and only, actually) NYTCW critic, Rex Parker, liked the puzzle. Me, not so much.

1 across: Popular brand of alcoholic seltzer. Answer: White Claw. I am not a fan of cocktails, preferring my alcohol to originate from grape and hops fermentation, and the occasional neat rye whiskey. Mixed drinks scare me, as most of them are way too tasty. I love the name of this thing, White Claw, but seltzer as I understand it, is a fizzy non-alcoholic adjuvant to cocktails that require carbonation. But hell, why did it take so long to add booze to seltzer and sell it to Gen-Xers who, it appears, will consume almost anything?

1 down: Fancy cars, in modern slang. Answer: whips. –**long-drawn-out OK . . .**–, wha?! Back to Google. Because Hip hop. Because 1990’s. Because the misunderstood use of the whip for urging teams to haul wagons. Because someone of dubious distinction with a lot of airplay thought the Mercedes Benz finial looked like a whip. (huh?) This word, and its clue, needs to be banned from puzzledom. Because.

13 down: Show that awards plays. Answer: The Espies, (not “espies” as in “I see you!” but relating to ESPN which is, if you don’t know by now, a cable sports network. I grumbled long about this one, and didn’t get the answer until long after the whole puzzle was solved.

29 down: Happenstance, cutely. Answer: coinkydink. OMG. Who? Why? Where? coincidence + dink? I couldn’t even begin to solve this one without all the crosses. Note in the puzzle image above the boxes with little red arrows in the corners? Evidence that I had to ask the puzzle to reveal the letters.

Most despised, 34 down: Like Friday Kahlo’s art. Answer: feminist. Frida called her art “self-taught Surrealism”. In the context of the times, her work was recognized as such in New York and Paris. That the two male constructors could only find a Frida Kahlo clue for the word “feminist” is a mystery to me, and perhaps, being male, they just couldn’t think up any clue that wasn’t derogatory. To women, that is.

A bit annoying, 31 down:Garment that might not be worn around the house. Answer: brassiere. my react to this answer, I fear, shows my generational tone-deafness. Even though I was solving this puzzle in my morning robe and thus was indeed braless, I am old enough to find no humor in jokes about bras. They are a stupid but vital accoutrement to a woman’s wardrobe. Again, my “feminist” nature took over for a few breathless moments, making this clue and answer feel like a “bro” joke. But I have to credit Rex, a generation or two behind me, who sagely commented: “Many women solvers undoubtedly nodding “true” there”, for helping me cool my feminazi response.

And in other exciting book news, Hayden Herrera, who wrote A Biography

of Frida Kahlo, (2002, Harper Collins, a detailed and insightful book) has issued her memoir Upper Bohemia, (2021, Simon and Schuster), detailing her chaotic childhood in the company of her unstable, self-absorbed painter parents. It’s definitely in my swelling summer read list.