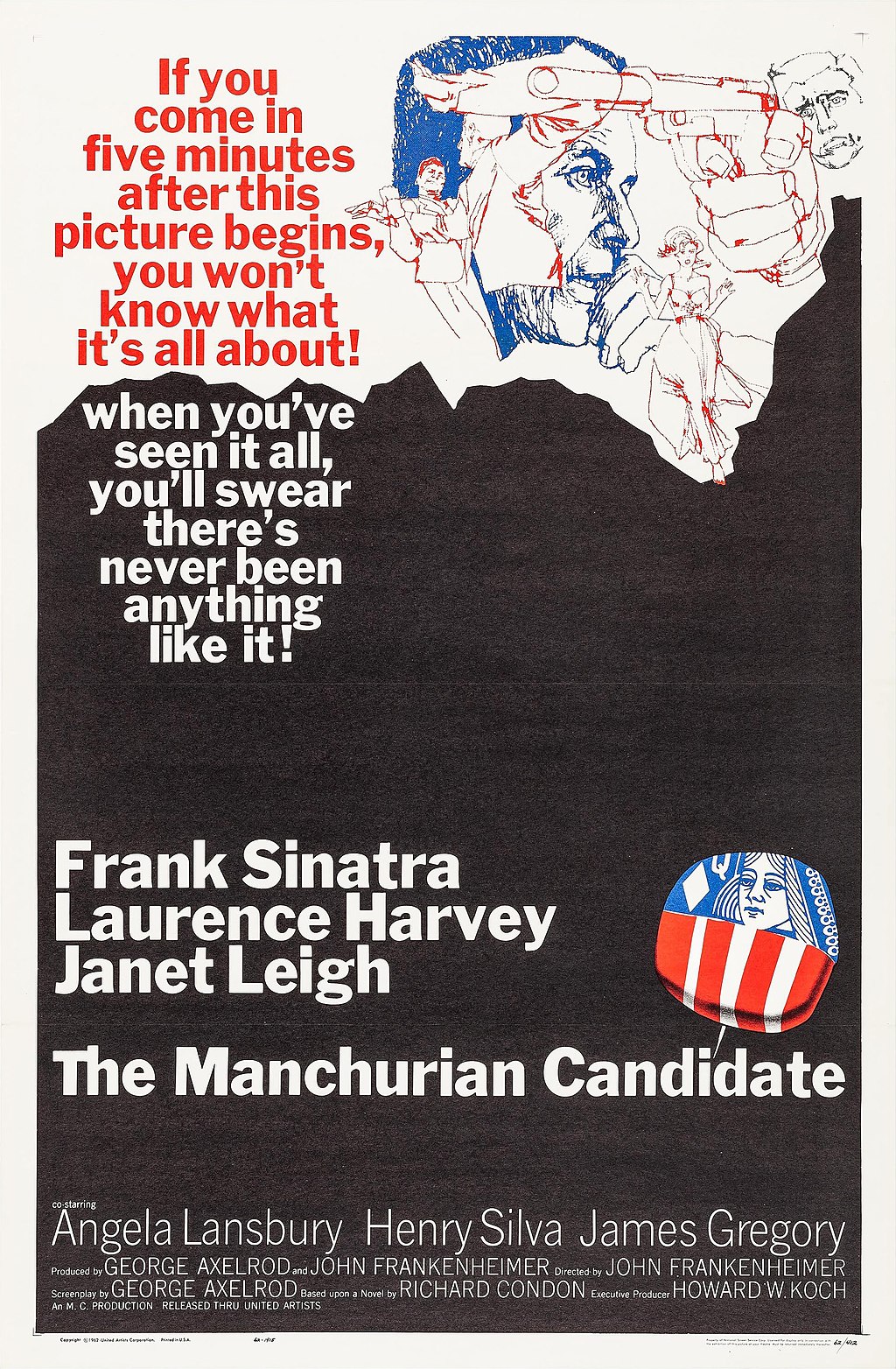 This is regarding the original 1962 film with Angela Lansbury and Frank Sinatra. The later remake sort of answers the question, “what if we rebooted The Manchurian Candidate without any of the understanding, humor, and themes of the original?”

I didn’t see The Manchurian Candidate until long after it came out—I was 10.

As a kid in Los Angeles, I watched way more television than I should have. Back then there weren’t such things as made-for-TV movies and though there was a lot of material there was also a lot of dead air time. Stations made up for this by showing old, and cheap, films from the—you guessed it—twenties, thirties, and forties. With a few monster movies of the fifties added in for spice. By the time we left for Alabama, I had seen a substantial number of films from those times. My movie heroes were W. C. Fields, Fatty Arbuckle, and Joe E. Brown. Most of my contemporaries didn’t know who they were.

When I did finally see The Manchurian Candidate in the late seventies, I liked it very much. Later, after reading Prizzi’s Honor, I got on a Richard Condon kick and read the novel. Which is brilliant and someday, when I re-read it, I’ll do a column on it.

Then, just last week, I found a streaming source for TMC without commercials. I watched it and, this time, I was pretty amazed how it stood up.

Nowadays, the film is a period piece so there is absolutely no feeling of this could happen here with it, recent political years notwithstanding. I think it would be extremely interesting to talk about it with someone that saw it as an adult in 1962. I have no emotional understanding of the 1962 political landscape. It was a year into the JFK administration and a year before he was killed. I was 10. My political understanding is forever twisted around the JFK assassination. Other people in different age groups may have different understandings.

A quick synopsis of the film: Ben Marco and his squad are captured during the Korean War. When they are found, Marco recommends his sergeant, Raymond Shaw, for the Medal of Honor. Shaw is the stepson of John Iselin, a hack senator that is making his reputation on false Communist accusations, recalling Joe McCarthy. Iselin is managed by Shaw’s mother, Eleanor. It’s clear in the first five minutes of the film, Shaw despises John Iselin and hates his mother. He informs them he’s taking a job in New York with noted liberal Holbert Gaines.

Marco has become an intelligence officer. He is having nightmares about the Korean experience. This revolves around an upper-class women’s garden party where he and his squad are stuck and the women change randomly into uniformed men. He desperately tries to interest his superiors in the nightmare, saying something is fishy about the whole thing. His superiors are not interested and think he’s cracking up and send him on compulsory medical leave.

The nightmares show that Marco, Shaw, and the rest of the squad were brainwashed. Marco and the men were conditioned to support the story that gave Shaw the medal. But Shaw has been brainwashed to be the perfect assassin.

While Marco is on medical leave, he meets Rosie Cheyney in one of the most idiosyncratic, romantic conversations in the history of cinema. It is relatively true to the book. I think it is my favorite scene in the film.

I won’t spoil the rest of it. It is a thriller. It lives up to the hype. Go see it.

There is one time period tic that one must overcome in watching the film these days: the narration. Just ignore it. It derives back from the days when film makers or producers didn’t really believe the audience could possibly be intelligent enough to figure things out on their own. Any information in the narration could have been done in a quick scene. I’m convinced John Frankenheimer must have had it forced on him—the rest of the film relies on the intelligence of the viewer.

The visual storytelling has a certain quirkyness to it. At some points, there are shadow shots that look like they came from The Cabinet of Dr. Caligari. There are handheld shots that feel very much like cinéma vérité. But it all lies fully within the scope of American filmmaking. At no point does it feel like Frankenheimer is trying to be anything other than that. It just feels like he uses whatever techniques at hand to tell this story.

Condon’s novel, and this film, are interestingly subversive. The heavy-handed narration in the beginning suggests it’s going to be some kind of moralistic war film. But the moral nuances remain gray. In some ways, it reminded me of A Touch of Evil by Orson Welles. Same idiosyncratic personal style. Same gray morality.

What I liked about it—and what I take from it in my own work—is the absolute lack of a one-dimensional villain. Eleanor and John are clearly terrible people with an evil agenda. But they are human beings with flaws, failures, and strengths. Shaw is a truly dysfunctional human being and fails at his redemption, but he was worthy of redemption and tried to achieve it. Rosie does her level, quirky best to save Marco from this swamp of moral ambiguity and by the end of the film or the novel it’s not at all clear that she is going to succeed.

Another thing I liked about this work is the sense that life goes on beyond the work. These days, we have a flat out obsession with sequels. Even Condon was not immune. After Prizzi’s Honor, he wrote Prizzi’s Glory.

But in researching this, I found no indication that Condon wrote or ever intended a sequel to The Manchurian Candidate. For this, I am glad. Both the film and novel are integral to themselves. It’s a window into the lives of the characters. At the end, they walk away out of our sight, gone but unforgettable.