The husband and I spent a few days in Eastern Oregon this week. Why, you might ask, does anyone want to go to Eastern Oregon? It’s high desert, endless stretches of sage, bunch grass and cattle. Highway 20 from Albany to Burns winds through the Cascade Mountain range to Bend, then arrows a straight line (mostly) east to Burns. At least one stretch of that road offers no gas stations for 100 miles. Or shade.

We got a cute “Bunkhouse” AirBnB rental, complete with a corral for those who bring their horses, or who might be participating in a nearby round-up. The corral served as a big fenced playpen for our two English mastiffs.

So again, why does anyone want to go to Eastern Oregon?

I did. I had never seen the mid and southern reaches of the state; other than driving north from California to Washington via Bend, or drifting past the John Day fossil beds to the awe-inspiring Eagle Cap in northeast Oregon, bordering the Snake River and Idaho, I knew nothing about the massive eastern half of the state I now live in.

has ever heard of, formed of ancient seabed, raised, shaken and baked by geothermal pressures. Just north of the Steen Mountains, a slab of earth’s crust raised during one of many seismic upheavals, lies the Malheur National Wildlife Refuge, a birder’s Big Day paradise of swamp lands and a major migratory fly-over stop for hundreds of species.

The Malheur lakebeds have survived a rocky and deadly past. The entire region was once home to the Paiutes, who were removed from the area to a reservation north of Burns by William S Harney, a cavalry officer heavily involved in the Indian Wars of the 19th century. Check out this PBS documentary about the tragic history of Pacific Northwest tribes. Cattle barons, many who didn’t even live in Oregon Territory, drooled over the range covered with abundant bunch grass, perfect for cattle. The lakebeds were drained for more range land and hay-growing. Ammon Bundy, infamous libertarian (read about the standoff here), claims to this day that the U.S. Fish and Wildlife Service stole the preserved land from hardworking ranchers who supported the American practice of Native American genocide. Indeed, Theodore Roosevelt granted the Malheur lake area to the public for preservation, and when that failed—water over-use dried up rivers that fed the lake–the USFWS stepped in, expanded the preserve, and paid the complaining ranchers a whole bunch of money just to walk away, which they were happy to accept. 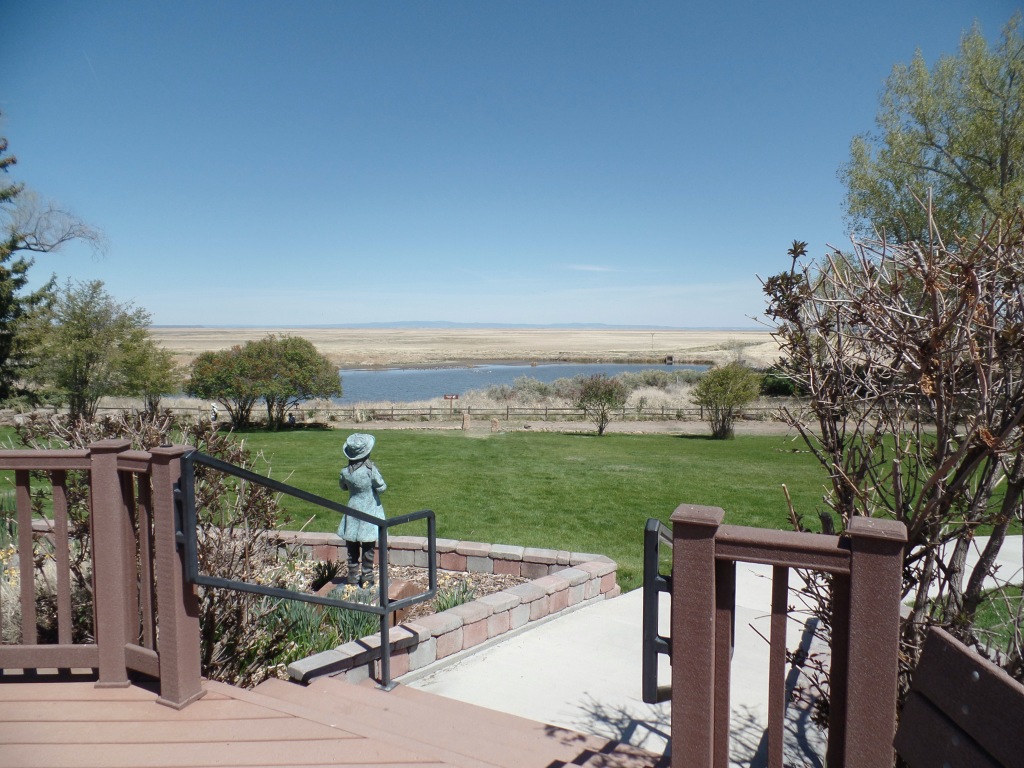 The Refuge is free to the public and provides an auto-tour through the wetlands-–also open to hikers, blinds for observing birds, gobs of information regarding the species that visit. At an area of 187,000 acres, the Refuge stretches between multiple basalt-capped mesas. The Friends of Malheur raise money to maintain beautiful gardens surrounding the Refuge headquarters buildings. Multiple feeders attract Western tanagers, yellow-headed and red-winged blackbirds, humming birds, and even the occasional lazuli bunting. Saw whet owls nest in the cottonwoods. Egrets, ibis, coots and dozens of other waterfowl rest and feed in the wetlands. Ravens, red-tailed hawks, both pale morph and dark, glide over the valley, and bald eagles visit, flying south from lakes and rivers in the Malheur National Forest to the north.

I may be a rank amateur when it comes to birding, but I had my binoculars (these will feature in Part 2—thus “guns” in the title) in one hand and my digital-zoom camera in the other, sun screen on my skin and my billed cap on my head. Real birders all prefer the hiker’s hat made by Tilley, spotting scopes with either chest or standing tripods and magnification up to 45x, khaki or beige clothing (garish colors startle the birds, I guess), sturdy Merrill boots, and a lot of patience. They also recognize bird-calls, a skill which adds a fluency to their language that leaves me in the dust.

Ironically, despite the joy of seeing a dozen Western tanagers eating orange slices that the staff threw out to them, the highlight of my birding was witnessing a battle over a gopher between two red-tails and one raven right out of the Bunkhouse window while I was having my morning coffee. See my videos on my website here, along with a few more photos.

Next week Part 2: If you forget your binoculars when you leave home and need to buy a pair in Burns, Oregon, shop with an open mind. And a visit to the Bureau of Land Management Wild Horse Corrals.