On July 7, 2020, my novel God’s Country will be released. You’ll find it right here on Book View Café as well as Amazon and Barnes &amp; Noble.

If you have ever asked the question what does sex, prostitution, crooked cops, televangelists, psychopaths, an eclipse and illicit neurochemistry have in common? The answer would be my novel, God’s Country.

This is the beginning of a trend.

Welcome to Witchlandia came out in 2016. Simple Things came out December, 2019. Summer, 2020, it’s God’s Country. September, 2020, my novella The Long Frame will be released and next December comes my novel Jackie’s Boy. 2021 isn’t yet planned though I have some ideas.

I have been collecting old metal for a while. By “collecting” I mean not throwing away stuff or grabbing thrown away metal when it comes my way. This includes rusty shears, old files, broken lawn mower blades, etc. Part of it is my incredible reluctance to throw things in landfills– especially things that show embody significant effort.

Think of it. A file is a chunk of hardened steel. It was pulled out of the earth as stone, smelted into steel, drawn and stamped into shape and ground (I think) into its final form. Can’t I think of something to do with it other than throwing it into a whole?

I have a lot of stuff like this. I dread what my descendants will have to do when I pass on. I remember what my sister and I had to go through after my mother died.

I’m not a hoarder. I’m a deep recycler.

At any rate, I’ve been thinking about the classic “turn a file into a knife” for a bit. If you enter that into google you will get a million and one websites and videos on how to do just that. Most of them involve heat treating and I’ve been reluctant to build a forge.

Then I ran into Alex’s Outdoors55 youtube channel and this particular video.

To summarize the video for the purposes of this blog (but not to deny the video. It’s good. Go watch it.) file steel is intended to be hard. It’s purpose is, after all, to grind steel. So it has to be harder than that which it is grinding. Makes sense, right?

But there are dimensions to the nature of steel. Steel can be soft, hard or tough. Pick one.

Soft steel is ductile and useful for twisting into shape– a garden fence. Cheap steel railing. Wire. Good for some things but not for a knife. Steel can be hard– good for ball bearings and files.But hard steel is also brittle steel. A knife has to be tough, hard enough to take and edge but soft enough that a sudden impact won’t shatter it.

All of this is done by handling the knife with temperature and quenching.

Most of the knife making videos and website (especially those that start with something hard like a file) first make the metal soft with heat. Alex pointed out that this might be unnecessary since we’re starting with something hard.

So, following his procedure, where’s what I did. 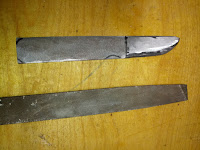 First, I took an old file and ground it down to the rough shape as you can see here. The important thing here, according to Alex and my own observation, is to make sure you don’t get the pesky thing too hot. If you do, you lose all that wonderful temper.

It’s pretty ugly here. There’s no bevel on the knife– what separates a knife from a slab of iron. 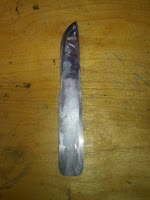 The knife shined up pretty well here on the sander. Here’s an example of a lack of decisiveness on my part. I never made a clear decision what to do with the grooves on the handle. I started to sand them away then changed my mind.

This had knock on effects in that the handle was no longer exactly flat. Something I’d have to handle later.

Once I had the knife about where I wanted it, I had to change the temper. Remember, the steel from which the file is made is hard. I wanted it tough. 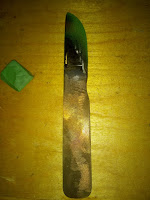 ng is very basic but here’s what I gleaned in my reading.

The result is stained yellow. This is desirable. Sand or buff off the stain gently so as not to take out the temper you just achieved. 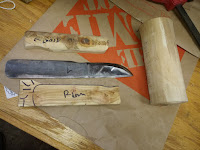 I’ve been keeping wood scraps around for a while. If we cut down a tree, I look at the wood to see if I can use it for something. (See above about saving metal. Maybe I am a hoarder.)

In this case, I had some apple wood from a tree we had to cut down. The two halves (called “scales” in this case) were cut more or less to fit. 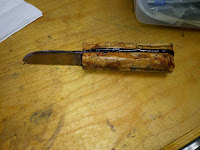 Here I ran again into a problem. I’ve been building my shop for decades using the cheapest level of tools available to me. If it weren’t for bad tools I’d have no tools at all.

Mostly, this has been fine. But here they failed me. My bandsaw wouldn’t bandsaw. My drill press wouldn’t drill the steel handle to put in the pegs.

I did what all brute force carpenters do: I reached for the expoxy. This had the nice side effect of making up for the lack of flatness in the steel handle– see indecisiveness above. 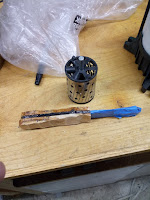 Once I had the above mostrosity, I had to pare it down to something usable.

I tried sanding. I tried the bandsaw again– it didn’t.

Then, I found a lovely little tool I had purchased years ago. That odd, little cylinder is filled with holes and cutting surfaces. I think it was made by micro-mesh but I don’t know where to get it now.

It tore through the wood. I shaped it in about 45 seconds. 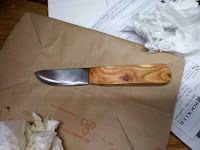 All that was left was sanding and polishing. The result is at left.

I am not a production knife maker. I can see about forty different things I’d do differently. This was a proof of concept to me to see if I liked it.

But I have been made humble by the inadequacy of my tools.

Hm. A bandsaw that bandsaws? A drill press that drill presses? What could I be thinking.

I’ve been saving my pennies…