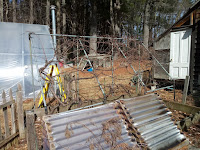 I spoke a few weeks back how I’d pruned the grapes. (See here.) At that time I said I would go into it more when I was able to upload the pictures.

Well, the pictures are uploaded now. Heck, they were uploaded a few days after that blog entry. But COVID-19 intervened.

So I said to myself: Self! It’s time to get those pictures up. Things are budding. In just a week they’re going to be out of date.

The first picture, up at the top, shows what I started with. Recall, we had grapes from the Concord but they were little and puny and there was a fungus problem. I surmised the problem was, at least in part, that the vine had become too thick. Not enough light and air movement for the grapes to grow in a healthy way.

In this picture, you can see the branches are all over the place. It’s interesting that where the branches were the thickest is where the grapes had the most difficulty– evidence for my hypothesis. 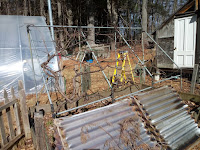 This picture was taken about half way through the process.

A lot of grape vines are designed to maximize production of a few, very high quality bunches. That’s why you see very spare vines in the vineyards.

I’ve take a somewhat different tack. I have limited space so I can’t sacrifice a hundred feet of many grape vines for twenty pounds of grapes. I need to have this vine produce fifty pounds of grapes in the space I have.

Consequently, I’ve thinned the vine down to a few strong horizontal leaders. But there are still some crosses– vine branches that cross one another. 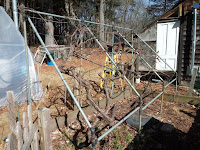 The next picture is not the Concord but the Marechal-Fochs vine. We got a good harvest from that last year and I did very little. 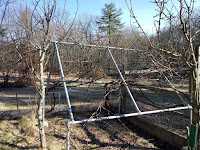 This is an extremely vigorous vine. The structure here is sort of like a house in that there are slanted faces to the east and west. (The Concord slants towards the south.)

There are two vines here, one at each corner of the far side of the “house.” Between the two of them, cover both sides of the “house” and follow the fence and terminate below that green garden stake in the foreground.

I decided I need do nothing about it this year.

That said, I may regret that decision. The weather has been chancy over the last few years and one of the effects of this is to have different sections of the vines ripen at different times. And it’s possible I’m just asking too much of them. But I like the vine going everywhere. It fights with me and tries to take over the pears. It tried to take over the cherry. It’s a tough customer.

Okay. That’s it for now.