Spring has arrived, according to the calendar. The bulbs in my yard seem to agree…except of course it just had to snow the day after I took that picture!

In the 19th century, it wasn’t just the early spring bulbs that could show a hint of green. Young ladies also could take on a verdant tinge, if they were among the many sufferers of what was known as green sickness, also called chlorosis.

So what was it? In 1802 A.F.M. Willich, M.D. published a compendious 5-volume work called Domestic Encyclopedia; Or, A Dictionary Of Facts, And Useful Knowledge: Comprehending A Concise View Of The Latest Discoveries, Inventions, And Improvements, Chiefly Applicable To Rural And Domestic Economy; Together With Descriptions Of The Most Interesting Objects Of Nature And Art; The History Of Men And Animals, In A State Of Health Or Disease; And Practical Hints Respecting The Arts And Manufactures, Both Familiar And Commercial—quite a title, huh? His summary of green sickness calls it “a disorder which frequently attacks females after the age of puberty. It is attended by a depraved appetite and a desire to eat substances that are not food…the skin is pale and discoloured; the face sallow or greenish, but sometimes of a livid hue; there is a deficiency of blood in the veins; with a soft swelling of the whole body, especially the legs during the night; debility; palpitation; and a suppression of catamenia (menstruation).” 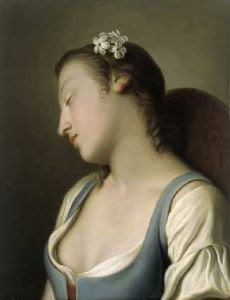 Yes, evidently, there was an epidemic among young women which made them turn slightly green and feel weak and exhausted. Fortunately, the good doctor was full of suggestions for treating this condition. For one thing, it was thought that marriage and childbearing provided the best cure; if that was not in the cards, then young women might try a nourishing diet with plenty of wine (but no spirits); moderate exercise, especially horseback riding, or a vigorous full-body rub with a warm flannel morning and evening, sleeping on mattresses rather than on feather-beds; early rising; and cheerful company. In addition, it was thought valuable to “keep the bowels open”, to wear worsted stockings rather than silk or cotton ones, and, as a last resort, to bathe on alternate days in tepid water, if the patient was strong enough to withstand such treatment. A medical professional might be called upon to give patient with severe cases doses of “dephlogisticated air” or oxygen, which would give almost immediate relief.

Sounds dire, doesn’t it? So what, really, was green sickness?

It wasn’t until the 1930s that medicine realized that it was actually a form of anemia—hardly surprising that young women entering puberty should be especially prone to it, then. Interestingly, a physician writing nearly two hundred years before our Dr. Willich also described green sickness in similar terms, and had his own cure for it: iron!