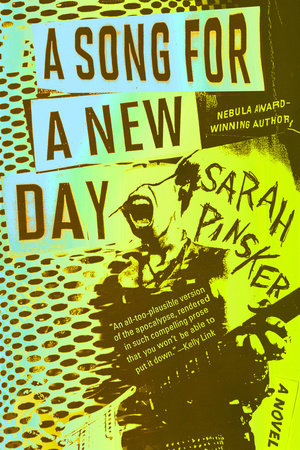 I was living in Washington, DC, on September 11, 2001. My sister lived (and still lives) in Manhattan, three blocks from where the World Trade Center used to be.

What I remember about that time was being surrounded by fear. So many people wanted protection and were willing to give up everything for it. There was talk of training people in disaster response and I wanted to do that, but I could never find an actual program. There was just a lot of fear and stoking of panic.

A month after the attack I flew out of Baltimore to visit my parents in Texas. The security lines stretched all across the airport. I was reading either Catch-22 or It Can’t Happen Here — I read both at the time. People were kind to each other, but the fear was there. I felt it.

In Texas, though, there wasn’t as much fear. People seemed to think all of us in New York and DC were over-reacting. I was shocked by their indifference, but it was also useful to me, I think. Not everyone was scared.

If I learned one thing from all that period, it was how easy it is to make people afraid and how much harm it can do.

Sarah Pinsker understands that, too. At its core, that’s what her novel A Song for a New Day is about.

But it’s also about something else: how to undo the harm caused by all that fear.

I’m reluctant to tell you too much about this book, because one of the real joys of reading it is watching the story unfold. I’m tempted just to say read this book and leave it at that, but that’s not quite fair, either.

The setting qualifies as a dystopia, a world in which bombings, other kinds of terrorist attacks, and pandemics have pushed the government to shut down gatherings of people. Tech and the online world have moved in to fill the gaps.

Despite dealing with so many dreadful things, this is, at heart, a gentle book. I appreciated that a lot, perhaps because I am tired of seeing dire consequences everywhere I look.

Luce Cannon is a songwriter, singer, and guitarist who just got her name on a marquee for the first time when a complicated world takes a turn for the worse. She’s one of those musicians who thrives on performing for people, and that’s one of the first things that goes.

Rosemary Laws was a kid when things got bad. Her parents moved to a farm to get away from as many dangers as they could and now she works as a vendor services problem solver for Superwally, doing her job in her tech hoodie from her childhood bedroom. She’s good at her job, but she wants something more.

The book tells us how these two women find ways to make the lives they want, eventually intersecting and going in directions that neither expected.

And that’s all I’m going to tell you, except that it inspired me to think about how we should live in our currently quite uncertain future. My post last week was on the dark side, but this book is not.

I’ve always found deep truth by reading fiction. Nonfiction can give you tools to use, but it takes good fiction to make you want to use them.

A Song for a New Day is one of the books that will do just that.