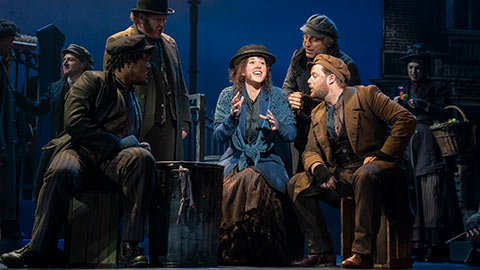 When I was in New York City earlier this year I simply didn’t have the time to take in the revival of My Fair Lady at the Lincoln Center. Heartbreaking! But fortunately the show is now on tour, and thank goodness I live near the Kennedy Center in Washington DC!

There’s something so dedicated, so determinedly grown up, about dinner and a show. And the Kennedy Center is a grand monument to the late president, a living space in constant use. The classic musical fits in perfectly here. Nearly everybody has seen the award-winning movie, starring Rex Harrison and Audrey Hepburn. But this is the first time I’ve seen this on stage.

And I picked a great production! There’s no point in reviving My Fair Lady if you’re not going to go first class, so this show had a vast cast, a full orchestra, and an elaborate revolving set. The actress playing Eliza Dolittle is the first Arabic Muslim actress to play in the role. There is not a problem with this show except the one baked into it from the very beginning: the ending. If you saw the movie, you saw one of the endings: that in spite of all their difficulties Henry Higgins and Eliza Dolittle stay together.

This knotty theater conundrum dates back to Pygmalion, the original play written by George Bernard Shaw. Shaw firmly felt that Eliza, having been transformed by Higgins, was a fully independent creature. She should seize control of her own destiny, and walk out to marry Freddy Eynesford-Hill. Neither his actors nor his backers agreed with him, and a persistent rewriting has occurred over the years, offering the Happily-Ever-After that the audience demanded. Shaw fought back with grumpy epilogues, and comments to his actors.

The movie, and many stage productions, stick to the HEA — the actual book of the musical cannot be changed, but you can direct the emotional impact this way and that. The final line is spoken by Higgins: “Where are my slippers?” These slippers, a point of frequent contention, can either be a return to his previous overbearing and contemptuous ways, or a gentle concession that he’s glad she’s back.

This new revival, however, ditches the demands of sentiment and romance fiction. In this 2018 version, Higgins has clearly not learned and cannot change. He was a selfish jerk at the beginning and continues a selfish jerk at the end, immediately grubbing up the buried hatchet and starting the fight about the slippers again. Recognizing this, Eliza walks out, off the stage and out of her life. I am informed that in the New York City production the acting space’s design allowed her to actually walk up the aisle through the audience and out the doors at the back, the most emphatic rejection of Higgins left forlorn on the stage.

You can see that the key question here is whether Higgins can and did change over the course of the work. Neither the book of the musical nor the text of Shaw’s play locks us into one answer or anot

her. (There is no such doubt about, say, Hamlet. The Prince is decidedly dead at the end of Act 5 and even the smartest director cannot change this.) For many years we had the romantic version of the relationship, ending in the happily ever after. But now, in this Me Too era, it’s more difficult to believe that a selfish misogynist can change. Some men are irredeemable, and Henry Higgins may be one of them. By leaving them Eliza keeps what she has won and isn’t sucked into the disaster that is Higgins.

Mercifully, the trend now is to cast Higgins as quite a young man. The brash self-centeredness is more understandable, possibly even forgivable, if he’s a brilliant and spoiled genius of only twenty-five. We are then able to hope that a couple more good hard rejections from intelligent women will help him mature into a decent human being. We don’t get the happy ending, not yet, but the possibility is there. Everything is in the hands of the clever director and producer. Which is what gives this work its legs (putting aside, of course, the magnificent score and the world-class lyrics). You can do it, and do it different, for every generation.