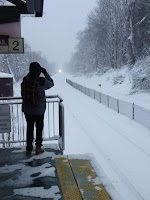 On to the farm.

A year sort of slipped past me. Sorry about that.

I’ll do a whirlwind on how we got here.

Winter, 2018-2019: I had a shoulder injury I was trying to accommodate and it had a significant impact on things since snow does not wait. I managed to get through that without surgery– a good thing. For those with soft tissue injuries, I recommend don’t just depend on orthopedists. As was explained to me, orthopedists are surgeons and, like all of us, they bring their expertise forward as a solution. I.e., if all you have is a hammer everything looks like a nail.

Instead, I suggest also consulting a rheumatologist. Rheumatologists are specialists in soft tissue injuries and are trained to avoid surgery. Sometimes, you have to blend the two on your own time.

In my case, I saw someone at Mass. General Hospital and she used ultrasound to actually look at (and show me) the actual injuries in real time. Ultrasound not only let her move around to areas of interest it also had significantly better resolution than an MRI. Her diagnoses were, therefore, drawn from a different data set than the orthopods and her approach similarly changed.

Also, rheumatology approaches take time, as opposed to surgery. It took nearly a year to recover using that approach. A surgical approach might respond more quickly but you’ve cut into a joint. So the calculus has to be weighing a possible solution (in my case, no orthopod guaranteed anything) with the risk that it might be made worse by the surgery itself against a long term symptomatic life with the realization that there would likely be a point beyond which there would be no further gains.

I had a 90% target. Surgery didn’t make sense to me just to get 10% more functionality.

Spring, 2019: By the time spring rolled around I had reached about 70% capability. Wendy had to do the garden tilling.

One change we made last year was to cut over to a Sun Joe electric tiller. We did this first because our old gas tiller died. But also, we have solar panels now and this means that at least some portion of the power applied to tilling can be attributed to our own power generation. It’s convoluted logic since we send the power we generated up to the power company and take back power the runs the tiller. Another reason we converted is the electric tiller is just a lot lighter. I had to wrestle the old gas tiller even though it was comparatively small. Wendy had trouble with it– she’s a lot smaller than I am. But she didn’t have any trouble with the Sun Joe.

That said, the Sun Joe operates by a different principle. The gas tiller didn’t turn fast but it had a lot of torque. The Sun Joe has a lower torque but a higher speed. That requires some difference in technique.

We also started using the Ruth Stout method for handling our potatoes. This meant that we chose where the potatoes would go in the fall of 2018 and piled it up with hay. In the spring we lifted up the hay bales and placed our chosen seed potatoes. The next step would be harvest in the fall: no intervening work.

Summer, 2019: Like previous years, we had a cold, wet spring and early summer. Then, we had a warm July and August. By the end of August it went cool again. September was a long warmish tail.  You can see that here.

July, August and September would have been nice if there had been a warm May and June. As it was, some plants like  peppers, melons and basil never got a good start. Some recovered in July but not things like melons which require a long growth period. It had a direct effect on the harvest.

Fall, 2019: We uncovered the potato bed in September and, low and behold! We had a lot of potatoes. We only used a couple of 4×8 beds but we got about a 50 lb harvest. This is very good for us especially considering the weather. We did get rodent damage. The potato beds were down on the south side of the property near the road. We discourage the cat from hunting down there. So, one lesson might be to move the potatoes up near the house where we can give the cat full access. But I have to say the Stout method was a success.

The spring was bad enough that we had no good apple pollination. Only a few crabs ended up bearing. The peaches did well. The Cornelian cherries did very well. The Marechal-Foch grape did okay. The Concord grapes, curiously, didn’t do that great. There was a lot of fungus. Part of this might be the weather. However, I hadn’t trimmed back the Concords for some time and I think it got a bit thick. I think that closeness never allowed enough light into the grape clusters. We’ll see if trimming helps next year.

We have had a problem with black knot on the plums for some time. We took out two trees summer of 2018, hoping that would take care of the problem. In addition, we planted resistant replacement plums on the opposite side of the property.

However, come summer 2019 we found it had spread to a nearby apricot as well as the plums we had not removed. Fortunately, we have no evidence of black knot on the new plums. We’ve decided to remove the remaining infected plums and the apricot this winter. We also decided to remove two non-productive cherry trees as well. There is currently a lively discussion what to do with any usable but potentially infected wood.

Fruit production this year was, therefore, mainly peaches, grapes, persimmons and Cornelian cherries. We have some young trees such as the additional plums and nectarines but they haven’t come on line yet.

We made Cornelian cherry jam– which was very interesting. It had a slight astringent tang that made it quite good. We also had a lot more persimmons than we knew what to do with and not as much in the way of Concord grapes. Given that, we decided to do a persimmon/Concord wine. It’s gone through primary fermentation and tasted good but like it requires a couple of years. It’s holding down the basement floor aging until spring. We had a good M/F grape harvest so that’s also aging downstairs. We still have persimmons left over in the freezer so now that Thanksgiving is over, I’ll start up a persimmon wine. There is also left over Cornelian cherry pulp that we canned. We may make Cornelian cherry wine as well.

Winter, 2019: The first snow was on the first day of December.

The main garden has been cleared and we dropped the fence so when we do a spring burn the garden gets the benefit. Last year we had some difficulty due to weather, scheduling and my shoulder. Instead, when we had an ash tree taken down we persuaded the tree company to chip our brush pile instead. However, we would not want that done with the black knot wood. That has to be burned.

We’re running a little late on things. We still have to put down the straw bales for next years potatoes. We’ve gotten some seeds and made some decisions.

I’d like to grow corn this year. I skipped last year but it’s a thing I like to do. I just enjoy it. I’ve been reading about glass gem corn so I’d like to try that.

My shoulder has recovered as much as it’s probably going to. I consider it at 90%– it handles snow blowing well.