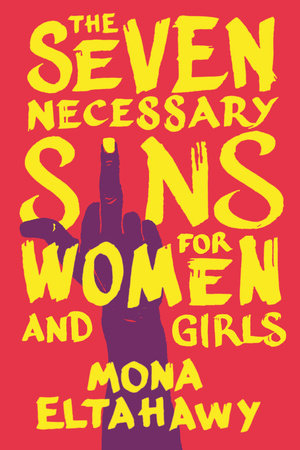 Mona Eltahawy starts every talk she gives with “fuck the patriarchy.” The words are powerful, and made more so when spoken by a woman, particularly a woman of color and a Muslim.

Her approach is the same when she’s writing. Her excellent new book, The Seven Necessary Sins for Women and Girls, is not nice or polite. It minces no words.

She doesn’t change her words based on where she’s speaking or who her audience is. And she responds to arguments that women and others resisting patriarchy, white supremacy, and autocracy should respond politely by asking, “Who does civility serve?”

It sure as hell doesn’t serve me, or other women, or poor people, or people of color, or all the others who keep being told to be nice. I read those words and I recognize just how tired I am of being nice.

In Chapter 3, Eltahawy makes a strong case for using profanity, calling it “the verbal equivalent of civil disobedience.” But her defense of fuck is not the only powerful (and perhaps controversial for some) statement in this book.

The Seven Necessary Sins is a powerful manifesto that makes it clear that women, together with others ill-treated by a patriarchal structure that rewards a few powerful rich men and, to a lesser degree, their hangers on, must claim their power to end the misogyny that cripples our lives and keeps us in check.

I found myself ready to cheer at every page.

The “sins” are anger, attention, profanity, ambition, power, violence, and lust. Many of these subjects have been covered in works by others. Anger in particular has been the subject of a number of feminist books in the last couple of years, and attention, ambition, and power are key elements in such excellent books as Kate Manne’s Down Girl: The Logic of Misogyny and Ana Fels’s Necessary Dreams: Ambition in Women’s Changing Lives.

But this is a book powered by Eltahawy’s anger, making it more uncompromising, more “uncivil” than all the others.

Arguing for stoking anger, she writes:

She makes a strong case for violence.

Not only are women socialized into submission, but we are told, essentially, not to be violent even as a form of self-defense but to wait until men can stop being violent toward us.

And, making us — even herself — uncomfortable, she takes the argument for violence farther: “If violence is the language that patriarchy understands, isn’t it time more women speak it, if only for their own safety?”

As someone whose life was changed by martial arts training and who teaches self defense with a feminist emphasis, I consider it very important for all women to discover their own physical power and know that they can fight should they need to.

The more realistic and salient the possibility of women’s violent retaliation or preemption of male violence becomes, the less male violence there will be.

Yes. Right now far too many women and men believe that women can’t fight men. Dispel that myth and things will change.

Or, in Eltahawy’s words: “We must make the patriarchy fear us.”

We’re not going to get the changes we want in the world by being nice or by pleading with others to be nice to us. We get them by claiming our power and demanding our rights.

This book will inspire you to do just that.