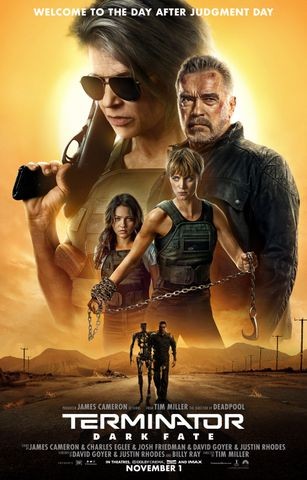 A long time ago in a galaxy far, far away — or rather, back in the 1990s in a city on the other coast of this continent — my housemate and fellow Aikido student Natalie was shocked to discover that I had never seen the Terminator movies, which at that time numbered two.

And so we proceeded to our neighborhood video store (like I said, a long time ago) and rented both the original Terminator and Terminator II: Judgment Day. We may have watched them back to back.

Natalie was so right. They were Linda Hamilton films. I became a big fan immediately.

When they made the later films without her, I didn’t bother with them. But when I heard Terminator: Dark Fate not only starred Hamilton, but featured a trio of strong women fighting the machines, I figured I had to see it.

Seeing Hamilton with gray hair and wrinkles being just as tough and kickass as ever made my day. That the story revolved around the three women was the icing on the cake.

And you know, Arnold’s character Carl turned out to be kind of sweet.

I’m not going to worry about spoilers here, because the movie is already disappearing from the theaters as a box office flop (probably because of girl cooties, because it otherwise seems to be very much like the successes).

While I thoroughly enjoyed seeing Hamilton and having the story focus on the women, the movie as a whole could have been a lot better. There’s a great core story in there, but so much time was wasted on extreme fight scenes with a machine that is very, very hard to destroy. Those, of course, are done by special effects, not by acting.

I do not have a sufficient vocabulary to express just how bored I am by car (and even airplane) chases and fight scenes created by special effects. As I’ve said before, I feel the same way about superhero movies.

What I would give for a good action story about ordinary human beings!

What makes Hamilton’s Sarah Connor so compelling is that she is not superhuman. She was an ordinary person who discovered a terrible secret and became a fighter to protect herself, her son, and (not incidentally) the future of humanity.

The fact that the terminator played by Schwarzenegger becomes somewhat human is a wonderful touch. That the leader of the future who needs to be protected in this story is a young Mexican woman who would have been a leader in a more ordinary way in her current life gives us a real story. And that the being sent from the future to protect her is an enhanced woman, but not a machine, is another great bit.

But we only get glimpses of these stories around all the overwrought fight scenes.

There was another thing that upset me about this movie, and it’s something that upsets me about the earlier ones as well: there’s a hell of a lot of collateral damage to innocent bystanders. The second movie dealt with that to some degree, and it would be possible to address it as part of the story, possibly making the point that it was terrible, but what was going to happen in the future was far worse and there was no way to avoid it.

In a world of mass shootings and bombs that hit weddings and funerals and all kinds of other violence that someone decided was “necessary,” movies shouldn’t ignore the harm their heroes do to others even if it’s inadvertent.

The other thing that bothers me about the Terminator movies as a whole is a science-fictional criticism: I don’t think humanity’s struggles with intelligent machines is going to be like that at all. So far, I think Her is the movie that has the best response: why would machines that smart bother with us?

Of course, Her didn’t come with all those damn fight scenes, which, in the end, made it a lot more watchable.

Both Terminator: Dark Fate and Captain Marvel gave me pleasure by showing me strong women taking action. Twenty years ago that would have been enough for me.

Now, though, I want much better stories to go with them.

(For more takes on this movie, I recommend the discussion by Charlie Jane Anders and Annalee Newitz on the podcast Our Opinions Are Correct.)