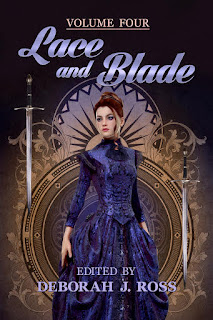 For a number of years, I had the privilege of editing the anthology series, Lace and Blade. The concept was a certain flavor of elegant, romantic sword and sorcery, witty and stylized, sensual yet with plenty of swashbuckling action (think The Scarlet Pimpernel with magic). Because the publishers wanted to release the first volume for Valentine’s Day, I contacted a group of seasoned professional authors, people I could depend on to understand what I was looking for and to deliver top quality stories to deadline. For various reasons, the publisher insisted that the second volume be open to submissions. If I had any idea what I was getting myself into, I would have refused. Insulated in the world of competent fantasy writers and readers who are versed in the grandeur of everyone from J.R.R. Tolkien to Tanith Lee, I was ill-prepared for what mundanes think of when they hear “fantasy.”

Needless to say, when I talk about sexuality or eroticism or sensuality or gender issues in fantasy, I do not mean pornography. It seems that for far too many people, sexuality is such an emotionally difficult subject that instead of facing it honestly, discussing it openly, they shroud it in prurience and embarrassment, or else turn it into something salacious or forbidden. Yet just about every human being over the age of puberty has had sexual feelings (notice my delicate use of qualifiers). So if sexuality in fantasy does not mean “your most lascivious and pornographic imaginings, regardless of whether you’d really like to do these things, because how would you know what you enjoy if you’ve never been permitted to experiment,” what is the role of sexuality in fantasy? Does it even have one? Should we keep sex out of fantasy literature, restrict the love stories to a chaste kiss now and again, and keep the hero/ine’s mind firmly fixed on nobler causes?

I believe that sex is such a powerful force in human lives that it is impossible to portray the full scope of emotions and motivations without it. People might not, for a whole panoply of reasons, act on their sexual desires, but they have them. They have them in wildly inappropriate situations, as well as those times and places that nurture genuine emotional intimacy. The feelings are ignored or fulfilled, misdirected or frustrated, overly indulged or denied utterly. Freud had a few things to say about what happens when such a basic drive does not find healthy expression, and although his theories were dead wrong on many counts, he was not mistaken about the fact that sex will not go away simply because society (aka The Authorities, secular or clerical) disapprove. So already, we have two ways in which considerations of sexuality are important to any story: character development and world-building.

What are the attitudes and practices regarding sexuality in this culture? Is it permissive, repressive, or a combination? Is marriage live-long or fixed-term? Monogamous, polygamous, polyandrous? Do different cultures in your world treat love, sexuality, and marriage in the same way? (For example, how are sexual fidelity and jealousy regarded? Is marriage a personal or a business relationship? Who determines what is acceptable in sexual behavior? Have norms changed over time and if so, why? What are the social, moral or legal consequences of transgressions? Are there times, places, or partners for whom “anything goes”?

Where does a specific character naturally fall within the norms of his/her culture? How does he deal with the conflict between desire (or abhorrence) and expectation? Are other options (secrecy, emigration to a more compatible culture, open defiance) possible for him or her? Not all characters experience the same degree of sexual energy, and most will vary in their interest, depending on circumstances. Some will react to stress by becoming more sexual, while others will respond with diminished desire, even becoming asexual. Some interpret every personal interaction in sexual terms, and others are extremely private or compartmentalized. Interesting characters, like interesting cultures, are not monolithic in their sexuality.

Sexuality has a special role in fantasy stories because of its universality (or near-universality) in human experience, and its power. It’s fairly common to use sexual energy as the basis for magic. In some systems, magicians create power by channeling the sexual energy either of themselves or of someone else, making sex a necessary part of magical use. But in other systems, sexual energy and magic are incompatible, leading to painful choices for characters and societies.