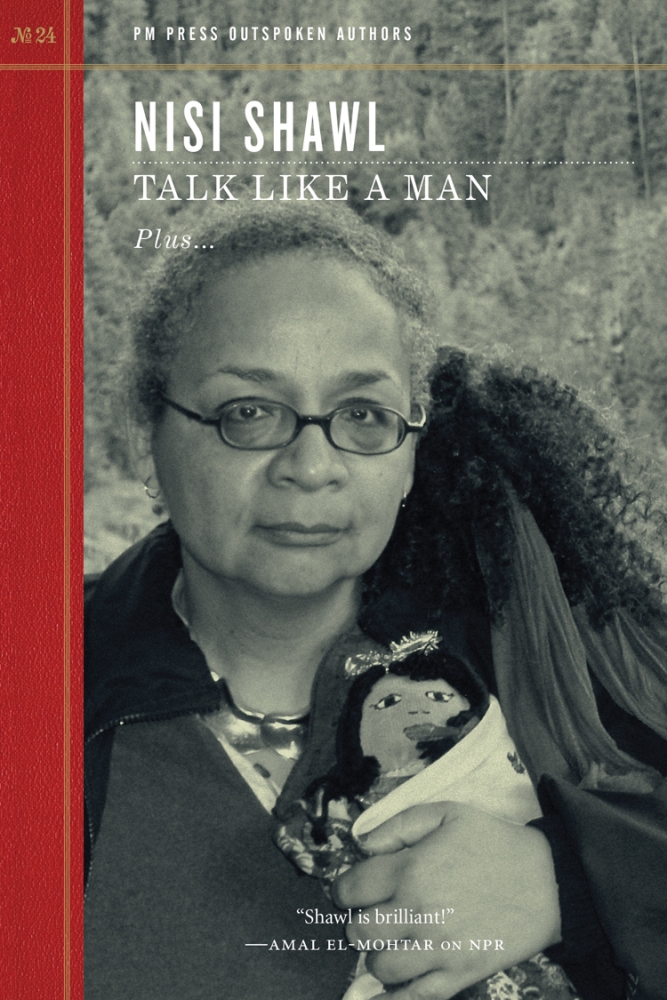 The thing I like most about all of Nisi Shawl’s fiction is the imagination that underlies every piece. The stories collected in Talk Like a Man, the latest in PM Press’s Outspoken Authors series, are no exception. Each one of them takes a concept or image or idea and goes some place where no one else would take it.

It is said to be a marketing strategy to describe someone’s work as similar to that of another author. Since what I most want as a reader is to stumble across a story that does something I never thought about before, this doesn’t work for me.

In the nonfiction piece in this book, “Ifa: Reverence, Science, and Social Technology,” Nisi talks about the lack of conflict in their mind between writing science fiction and practicing the Ifa religion. One might think Nisi’s imagination comes out of finding that balance and relationship, though I could equally argue that it is their imagination that allows them to see the interrelationship among Ifa, science fiction, and science in the way that they do.

There are four stories in this book, each of them from a different branch of the SF/F/H genre. “Walk Like a Man” is definitely science fiction, while “Women of the Doll” includes elements that class it under fantasy. “Something More” is horror or dark fantasy. And “An Awfully Big Adventure” is a flash fiction that doesn’t quite fit under any particular term.

The thread that holds them together is that they are each quintessentially Nisi stories. No one else could combine future tech and school girls quite that way, just as no one else could bring a doll to life with all that complexity. Part of the horror of “Something More” is that the main character has to decide for herself who and what to believe about life and death situations.

Each of the stories is best experienced by reading, so I will not give you any plot summaries. I found it too much fun to figure out what was happening as I went along to want to spoil the experience for others.

As with the other books in the Outspoken Authors series, this one includes an interview with Nisi by series editor Terry Bisson. The questions are classic Terry: some silly and quirky, others political. Nisi’s responses provide more guidance into how they think. For example, this exchange:

Terry: As you approach our present in your “Crash Course in the History of Black Science Fiction,” you celebrate “the emergence of self- and small press publishing as a black SF force to be reckoned with.” Really? Isn’t this just making the best of a bad thing?

Nisi: Ninety percent of being black is about making the best of a bad thing. Case in point: chitterlings.

And perhaps my favorite of her responses is at the end: “To paraphrase Marlon Brando’s character in The Wild One: How am I rebelling against the patriarchy? ‘How many ways ya got?’”

Talk Like a Man comes out in November from PM, but you can go ahead and order it from their site now.