↓
Home Menu ↓
Skip to primary content
Skip to secondary content
Home→Inspiration→Watch Me Pull a Rabbit Out of My Hat! 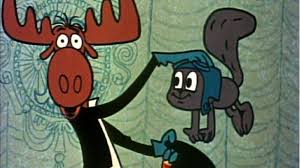 I watched a lot of cartoons as a young person. Like, a lot. In New York City, where I grew up, we rejoiced in the–at the time–enormous selection of 7 TV channels (including the educational channel), and by 5 o’clock every evening at least two of them were showing cartoons: Warner Bros., primarily, but Woody Woodpecker and the Hanna Barbera slate, and Tom and Jerry… and those frankly kind of awful limited-animation series like Jonny Quest and Clutch Cargo. I imbibed them with a growing critical sense (if you can say such a thing of an 8-year-old), coming to the conclusion that Warner Bros., and later, the work of Jay Ward, were the clear winners.

Both were deeply subversive, and both partook liberally of the attitudes of their time, while mocking those attitudes pretty mercilessly.

I learned a lot about the 1930s and 1940s from Warner Bros. At the time, of course, I didn’t understand how much I was taking on board about, for example, life on the Home Front during WWII (blackout curtains, gas rationing, “Is this trip really necessary?” and the Little Man from the Draft Board), who the Hollywood hot tickets were (all Warners stars, of course). Some of the references were direct: Lauren Bacall wants rabbit pie, ordered by Humphrey Bogart, and Bugs Bunny happily complies, because, well, Lauren Bacall. Others were… well, let’s just say that when I first saw Katharine Hepburn in A Bill of Divorcement, I understood what Bugs Bunny had been going on about with the calla lillies.

Not all Warners cartoons repay rewatching: some of them are flat out appalling: there’s a reason why no one shows “Bugs Bunny Nips the Nips,” or the horrifying “Coal Black and De Sebben Dwarfs” except at “midnight” screenings. And even the more every-day cartoons have moments that bring you up short and make you realize that, in fact, we’ve made some progress since 1940. On the other hand, the sheer insane genius of “Porky in Wacky Land” or ” The Big Snooze” is hard to beat, and again, will sneak in all sorts of cultural and historical references you won’t find anywhere else.

And then there are Rocket J. Squirrel and his dauntless companion, Bullwinkle J. Moose, the Abbott and Costello of animation. As Beth Daniels says in this lovely article, “Rocky was the more intelligent straight man: a less hostile Abbott to Bullwinkle’s more secure Costello.” I kind of had a crush on Rocky when I was 7: he was so good hearted. And he put up with Bullwinkle’s repeated attempts to pull a rabbit out of a hat. What I didn’t realize when I was 7, because I was soaking in it, was the extent of the Cold War-era mindset the Rocky and Bullwinkle Show lampooned without mercy. Not just Rocky and Bullwinkle and their foils, Boris Badunov and Natasha Fatale (and their boss, Fearless Leader), but in Fractured Fairytales and Dudley Do-Right and especially, Mr. Peabody and his Boy, Sherman. Is there anything that Jay Ward and his team didn’t skewer?

The odd thing is that in considering these seminal influences and how they poked at all that was accepted in American culture, I realized the extent to which they also came from a set of very real values. Poking fun at the pokable is an honorable pastime. Pettiness sets you up for a take-down. Bugs Bunny may have been a self-admitted stinker, but he wasn’t… vicious. Daffy Duck delighted in tormenting Porky Pig, but he wound up hoist on his own petard at least half the time. And over in Rocky and Bullwinkle-land, our Hapless Heroes always seemed to survive, not least because the bad guys were just as hapless.

My husband and I raised our kids on the cartoons of our childhood. I like to think it was less from nostalgia than because we felt they gave the girls a useful toolkit for living in an increasingly nonsensical world. Also: Daffy Duck snarling “Of course you realize, this means WAR!” Priceless.