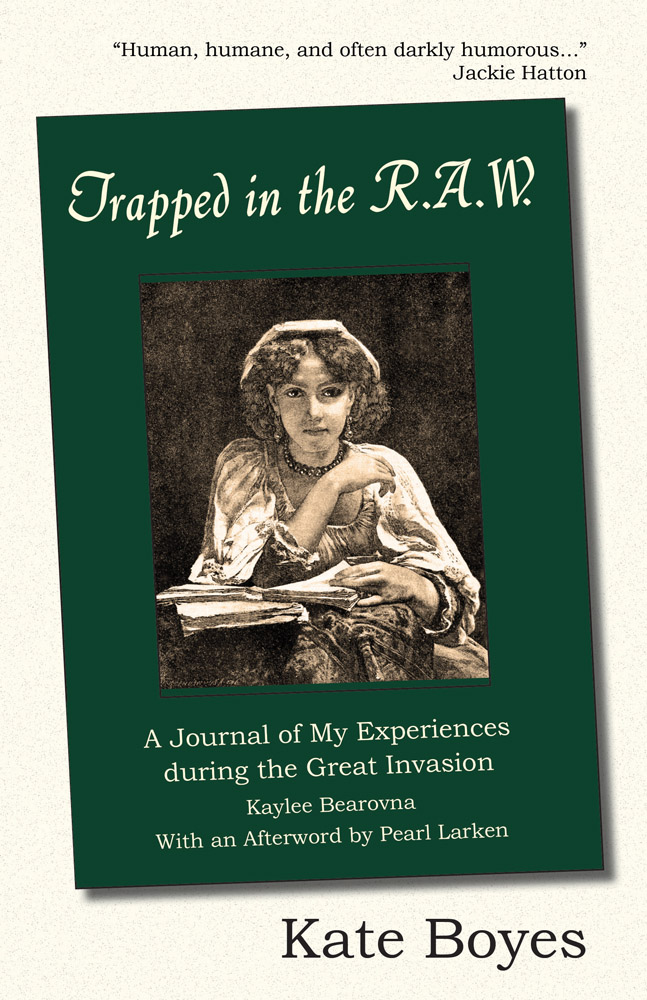 One of the things I love about science fiction is the way a good writer will throw the reader right into the heart of a story taking place in a different reality and trust them to catch up as they go along.* They do this by using made up words or having the characters talk as if something the reader never heard of is a given or just by not explaining things.

Two science fiction books I’ve read recently do this in unique and amazing ways. Both are feminist in nature and both involve aliens who, though they seem all-powerful at first, turn out to have many flaws. Aside from those two things, these books are completely different, but equally wonderful.

Gillian Polack’s The Year of the Fruitcake features an alien living in Australia as a menopausal woman. Gillian is part of Book View Café, but this book is from IFWG Publishing Australia. It’s also available from Amazon in the U.S.

Kate Boyes’s Trapped in the R.A.W. features a young woman who finds herself safe but alone in the rare books collection at her university during a horrific invasion. It’s from Aqueduct Press. I had the good fortune to read this book before it came out and blurbed it as well.

I hesitate to tell you too much about these books, because part of the sheer pleasure of reading them is that you don’t know exactly what’s going on. It’s kind of like reading mysteries: you make little discoveries as you go along and follow those up with assumptions, which may, or may not, be right.

But I will tell you a little bit, just to whet your appetite.

In The Year of the Fruitcake, five women meet up by chance when they end up sharing a table in a café. They are all very different, and one of them — though we’re not sure for a long time which one of them — is an alien from a culture of multiple genders in which the beings change genders several times over a lifetime. On Earth, however, she is trapped in the unchangeable body of a menopausal woman and has a confused mass of memories about who she really is.

The five become friends and meet up regularly, generally sharing chocolate and the woes and successes of their life. This story is integrated with the alien’s efforts to figure out her memories and other reports from the alien culture.

In Trapped in the R.A.W., Kaylee Bearovna is the last person in the rare books library at her college when something horrific begins to happen outside. Because the library was built to protect the books, it is something of a fortress, so she is safe inside for now. But not only is she alone, there are a couple of other problems.

For one, there is only a tiny bit of food in the library break room. And secondly, there is almost no paper, since the library is computerized. To make matters worse, the facility was already out of toilet paper when the attack happened. One of the first things Kaylee has to do is raid the endpapers of some of the rare books for her personal and writing needs (the electricity is gone as well, so she has no phone or computer for this purpose). Any reader can imagine just how hard that is to do.

As I said when I blurbed this book, one of the most refreshing things about it is that it is about an ordinary young woman who, in a time of crisis, survives and acts.

In fact, one of the joys of both books is that neither is about superheroes. There are aliens with unusual powers in both, but the way the people in the stories deal with them is not by some magical warfare.

That would be enough reason to read them right there, but there’s the added bonus that both are beautifully written.

Go forth and read.

*I’ve always assumed that it was this feature of science fiction that caused some readers to dislike it. That is, it’s not that the story isn’t “real” as in “realistic” (as if supposedly realistic fiction is real) so much as it is that it wasn’t obvious what the story was about at the very beginning.