Okay. Deep breath. Time to lay out and cut.

One of the key concepts in garment making is the grain of the fabric. If you are making the fabric, as when you knit or crochet or weave your toga or tartan, this is not so much of an issue. But when you cut a garment out of a woven textile, you need to be sure that the grain of the fabric — the warp threads — run in the proper direction. You are turning a plane into a three-dimensional object, and it has to hang right.

If you are not working with perfectly plain fabric, then an allied thought is pattern. You want the stripes to run consistently, up and down or around and around. They should match up at the side seams. Plaids and checks have to match up in both directions. Once you acquire the eye for this kind of thing you can appreciate the skill in, say, this: 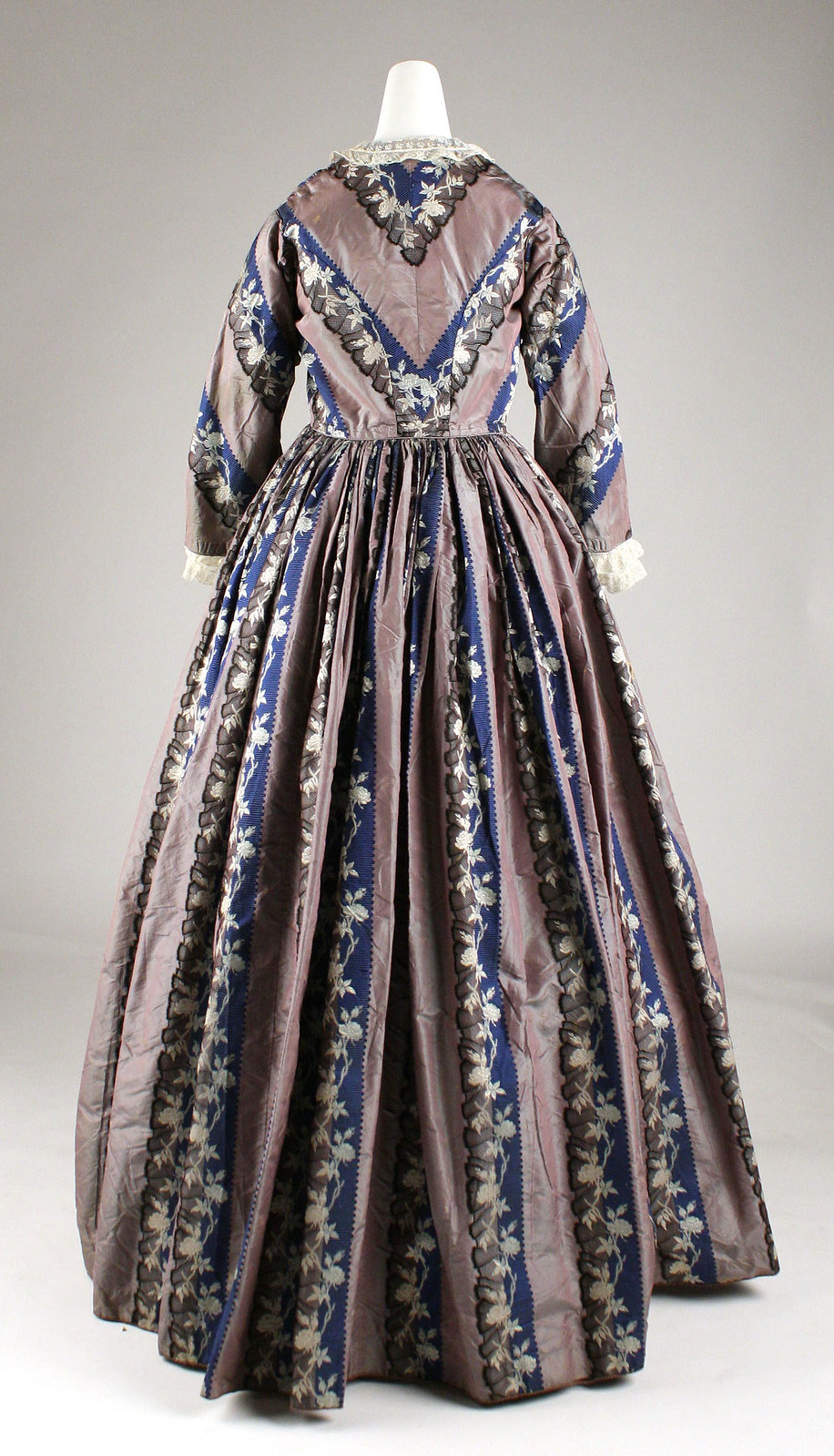 This is the rear view of a 19th century dressing gown, sewn by a master. The stripes run the length of the fabric, longways. But the bodice is cut on the bias, so that the stripes form that thrilling vee down the center back. Note the sleeves, also cut on the bias. In the period style they are bell-shaped, widening at the wrist (you can glimpse the lace undersleeve peeking out). Cutting them on the bias lets the stripes form another vee, framing the wearer’s hands. Oh, and all fabric in that period was woven very narrow, perhaps a mere 30 inches wide. That vast skirt is pieced out of perhaps half a dozen panels or more. You don’t notice, because the stripes all match perfectly.

So, laying out the pattern on the fabric is very important. I have contemplated my gold brocade carefully, and determined that the flowers do point in one direction. (As do the flowers in the skirt of the period gown above, did you notice?) Therefore, all my main pattern pieces, the four body pieces and the two sleeve pieces, have to be laid running in one direction. It doesn’t particularly matter which way I choose, but in the finished garment all the flowers should point the same way. It would look weird if in one or two panels they appeared to be standing on their heads. (Look closely again at the period gown. Does it seem to you that the flowers run up on the skirt, but down on the bodice? I am certain that was intentional, but I can’t think why. Possibly there was not enough fabric for all the flowers to run up.)

After mulling over grain, and pattern, I have laid it all out, on the rug for want of a table large enough:

The fabric has been folded in half lengthwise, selvage to selvage and right sides together, so that I am cutting out the two front pieces and the two back pieces at once. Everything is firmly secured with pins so that the slippery brocade cannot escape. Note my cleverness in ensuring it’s on the straight grain — the straight center front and back seams parallel the selvages. A refinement of parsimony is to cut each sleeve separately, out of the large slice of fabric next to each torso piece. This allows me to preserve the remaining brocade in one large useable piece. It is several yards long. I have enough here to make an entire other dress! So if I win the Nobel Prize in Literature or something and need a formal gown I am all set.

The dark spriggy fabric destined to be the lapels and cuffs is not patterned lengthwise. Instead the vines run across, from side to side. However, in the finished garment I do want them to run lengthwise. It’ll be tons prettier. This is easily achieved by cutting all the lapel pieces laid across the fabric, selvage to selvage, rather than lengthwise. I can do this because unlike those period fabrics the modern fabric is 52 or even 60 inches wide. You can see however that it’s going to be a close thing. To ensure that the fiddly collar/neck area is let alone, and to allow that 5/8 inch all around for sewing, I shall be forced to seam in a little extra slice of fabric at the very bottom hem. The place to do this kind of splicing is down at the bottom, where nobody will notice. I am cutting these pieces out right-side up, to make matching the patterns easier.

The final thing I must keep ever before me is that I cut all the paper patterns without a seam allowance. This made it easier to tinker with fit and measurements, but now I have to pay the piper. I need to cut about 5/8ths of an inch wide, around all the edges of these pieces, omitting not a single one. This is why, after cutting something major out, the cutter usually goes to have a nice lie-down and perhaps a glass of wine.