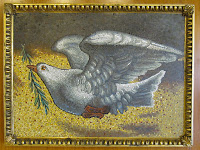 Following the 2016 election, I posted a series of essays called “In Troubled Times.” I wrote about despair, fear, anger, powerlessness, and determination. Then the initial fervor faded. Exhaustion set in for me as well as for so many others. Emotional exhaustion. Spiritual exhaustion. But the constant, increasingly vitriolic litany of hate and fear, as well as the assaults on democratic norms and civil liberties not only continued, it escalated.

What is to be done in the face of such viciousness, such disregard for human rights and dignity? Such an assault upon clean and air water, endangered species, and the climate of planet we depend on for our lives? How do we preserve what we value, so that in resisting we do not become the enemy?

I don’t know what the most effective strategy of resistance is. Social media abounds in calls to action. I do know that there are many possible paths forward and that not every one way is right for every person. Not everyone can organize a protest march (think of five million protesters in front of the White House; think of a national strike that brings the nation’s businesses to a halt). I find myself remembering activist times in my own past.

I came of age during the Civil Rights Movement and the Viet Nam war resistance (and, later, the women’s rights movement of the 1970s). I wore my hair long, donned love beads, and marched in a gazillion rallies. Those memories frequently rise to my mind now. In particular, I remember how frustrated I got about ending the Viet Nam war. In 1967, I joined the crowd of 100,000 protesters in San Francisco. I wrote letters, painted posters, and so forth. And for a time, it seemed nothing we did made any difference. My friends still got drafted and not all of them made it home, and those that did were wounded in ways I couldn’t understand. Others ended up as Canadians. I gave up hope that the senseless carnage would ever end.

But it did. And in retrospect, all that marching and chanting and singing and letter-writing turned out to be important. The enduring lesson for me is that I must do what I feel called to do at the moment, over and over again, different things at different times, never attempt to second-guess history, and especially never give in to despair. Enough tiny pebbles rolling down a slope create a landslide.

My first political memories date back to the 1950s, when I saw my union-organizer father marching in a picket line. The 1950s were a terrifying time for a lot of folks. For my family, it was because my parents were active in their respective unions, and both had been members of “the Party” in the 1930s. My father was fired from his job on a pretext and soon became the target of a formal Federal investigation. (He’d been under FBI surveillance since 1947.) The Department of Justice filed a lawsuit to take away his naturalized citizenship. It was a time of incredible fear: people committed suicide or “went underground” (now we call it “off the grid”) by living in safe houses and using only cash. Some of our relatives did that, and our home became one of those havens. The DoJ suit was dismissed in 1961, although the FBI continued secretly watching my father until his death in 1974. I should add that it is so odd to me to regard that bureau as protecting democracy in current times, after their 1984 like behavior in the 1950s and beyond.

The point of all this is not that my family had a hard time. Lots of families had a hard time. Lots more are having an unbelievably hard, terrifying, horrific time today. The point is that we got through it. Not unscarred — it’s still excruciatingly difficult for me to call attention to myself by political activism. My parents never stopped working for a better, more just and loving world. They never lost hope.

In college I used to have a hand-written quote from the mid-60s by Carl Oglesby on my door. I searched for it on the internet and couldn’t find it, but it said something along the lines of this not being a time to give in to fear but to drink lots of orange juice, to love one another, and to bring all our joy and gusto to creating a world of peace, justice, and equality. The same holds true today. Since we live in a time when fear, selfishness, racism, and violence are proclaimed from the very highest levels of government, then we need our own turbo-charged, heavy-duty, loud and joyous commitment to the values we hold. And drinking your orange juice isn’t a bad thing either: we of the people’s resistance need to take good care of ourselves.

This is what I tell young people today. I remember what my parents told me when I was wigging out about some minor incident or another during the Cold War:

Keep your eye on what you would like to bring about, not just what new outrage is filling the news. Persevere with unstoppable steadfastness. Nourish yourself as an antidote to exhaustion. Pace your efforts. Keep balance in your life. Make music. Dance. Drink orange juice. Love fiercely.