↓
Home Menu ↓
Skip to primary content
Skip to secondary content
Home→creativity→Where Do You Get Your Ideas, Part Infinity 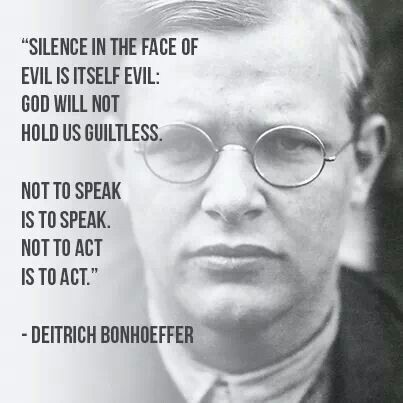 This is a perennial question that writers get. As you might expect the answers are just about infinite. But April brings to mind an example. I wrote a story, “A Mighty Fortress” (see it in the BVC anthology Rocket Boy & the Geek Girls). Where did I get the idea? It was Deitrich Bonhoeffer.

I hasten to add that nearly all I know of this Protestant theologian and 20th century martyr is in that Wikipedia link. His feast day is April 9th, his birthday. What got me going on this short story was not his indeed dramatic Nazi opposition and eventual concentration-camp incarceration and execution, but a play. This (as I recall) was titled Dietrich Bonhoeffer and was staged by an amateur arts group in my church’s basement.

And it was awful. Every disaster that can afflict a stage production happened here. Key actors failed to turn up, so that the role of Bonhoeffer’s brother had to be doubled by one of the concentration camp guards — tremendously confusing, since costuming was also minimal and Nazis were simply indicated by swastika armbands. The lighting failed, a calamity — you need to see the armband to know if he’s the brother at this moment or a Nazi. Actors forgot their lines and had to be loudly prompted by fellow players. It was such a sad sack of a show that something had to be done.

And put that way, the solution was clear. I would write a story about Bonhoeffer. To a hammer, every problem looks like a nail. Writers solve everything by writing stories.

An immediate problem arose, the scope of which you can grasp by clicking on that Wikipedia link. Theology is hard. And Bonhoeffer wrote a lot of it! If your time is not infinite you have to balance the research effort against the work. For a novel that seizes my soul I might take an entire year to bone up on 20th century German Protestant theology. I am a person who to write a novel has read nearly every word ever written about or by the Scott polar expedition, after all. It can be done.

But this wasn’t to that level of crazy. It was going to be a short story, and I am not going to invest a year of my life for five thousand words of fiction. Instead I began to focus on the nascent inspiration. Do you remember how Michelangelo carved his David? It was easy. He just got a big block of marble and cut away everything that wasn’t David.

So I began throwing out everything that I didn’t want to put into this embryo story. World War 2, too complicated. Protestant theology, hard. Combating Nazis, in too many movies. Amateur theater, some other day. The 20th century, eh. All of it, out. Sorry, Rev. Bonhoeffer, even you were out. I am driving towards fiction, not biography.

What I was left with was the image of a man in prison for his beliefs. Not even necessarily good beliefs. And could it be hard SF? a space prison? Yes it could, a really fiendish one! I’m good at fiendish, a lot better than I am at German theology. And from that foundation erecting the short story was easy. As easy as Michelangelo’s David? Well, once you can see the figure in the marble, you are good to go.