It all started last December with an article in the local newspaper, saying that the animal shelter was overcrowded and were offering half-off on adoption fees. So, since mine beloved spouse had been languishing in the absence of a dog (a German Shepherd Dog, preferably of German working lines, to be precise), I went to the shelter’s website to take a look. Behold, there was a young female who looked great in her beauty shot. We called the shelter. She wasn’t at all workable for us, being super high-energy and not cat-safe. (GSDs have a high prey drive, so it takes a special individual dog – like one that’s been raised with cats and taught proper manners – to not regard them as Fun Things To Chase and Kill). While I was on the site, I noodled around the list of adoptable cats and saw a couple that reached out to my heart. I have a soft spot for tortoiseshells, and my long-time favorite cat was a dilute (gray) tortie.

Then up speaks Daughter Who Abides With Us, saying she has quietly harbored Kitten Lust since the Ragdoll kitty she brought with us died (FIP, Feline Infections Peritonitis, invariably fatal). She went looking on the web for another Ragdoll or similar breed and found one. A family conference ensued, replete with “I had no idea you wanted a kitten so badly” and “I didn’t want to be a burden” sorts of statements. Further research led us to not one but two kittens:

Sarah (Daughter Who Abides With Us) located a Maine Coon mix, a gorgeous red and white girl at a local private shelter. Bright red, unusual in a female, with golden eyes. I felt a certain loyalty to the public shelter, especially since they had a sweet little dilute tortoiseshell tabby (“torbie”) with only one eye. We called the private shelter, passed their application procedure with flying colors, and reserved her. Then we decamped to the public shelter to look at Pirate Girl. 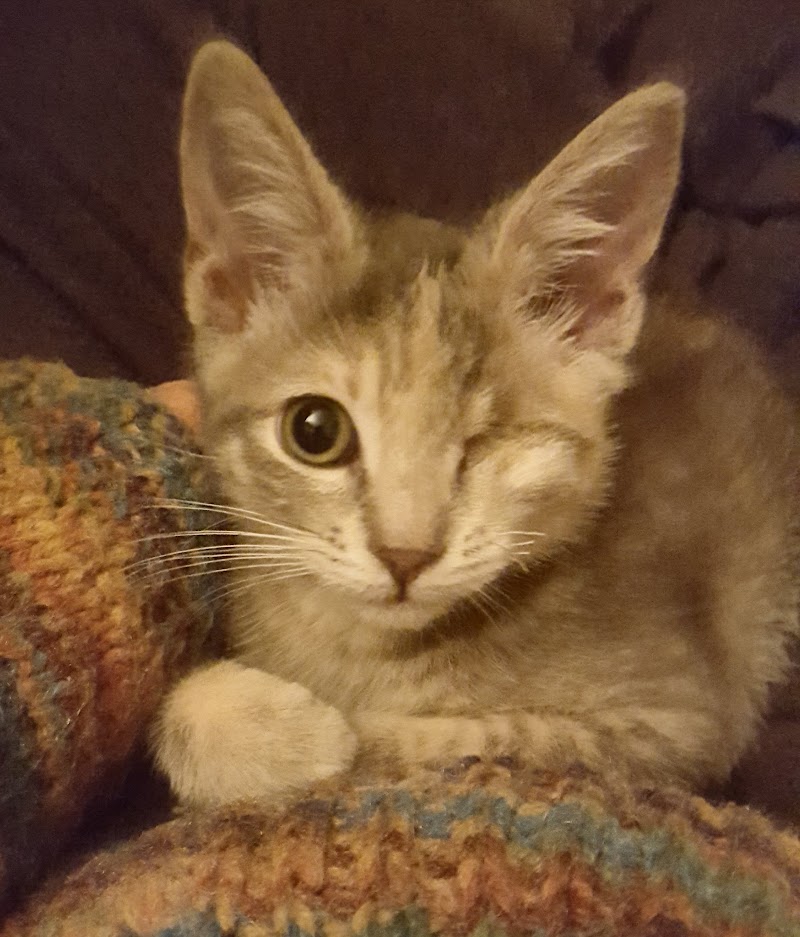 (Note: we already have one one-eyed cat. Gayatri came to us from the same public shelter about a decade ago. From the damage to her eye and her extremely hand-shy behavior, we deduced it was traumatic. We had it surgically removed since that kind of physical injury often results in a highly aggressive cancer.)

Pirate Girl (aka “Cornelia,” now Freya, as in Odin’s wife) was timid at first but began to warm up to us quickly. Given everything she’d been through in her short life – her intake photo with a hugely swollen lesion on her eye, covered in fleas, with a cold and parasites, was truly pathetic – it was no wonder. We brought her home but isolated her in my office to give her time to adjust and get used to being in a house instead of a cage. After a week, she was making love to us, purring like mad, gobbling up the kitten food we provided, and trying to make a break for it whenever we opened the door. So we tried her in the general household, taking it step by step. (First put adult cats in bedrooms, let kitten roam free and smell where they’d been; reverse procedure; put kitten in dog crate with adults loose, observe them for hissing and other bad words; introduce under close supervision.) It turns out that Shakir, our male, about 10 years old, fancies himself a patient, indulgent grandfather to kittens. Before long, he and Freya were romping and curling up together. Gayatri (the Original Pirate Queen), not so much, but as she mostly hang out in Sarah’s room, the hissing was manageable.

Then came time to bring “Hallie” (Red Sonja, guess why) home. Poor girl, she was found

abandoned and turned into a different public shelter at only one month old, and was set to be euthanized the same day. Fortunately, one of their staff called the private shelter and they rescued her.

I bet you’re wondering where the ringworm comes in. Guess? Sonja been handled a bunch in the private shelter so she was much more outgoing, but they did tell us she’d had ringworm and had been treated. We left Freya in the living area, put Sonja in the office, and then took her to our vet.

Yes, indeed, ringworm had come to live at our house.

[Note: Ringworm has nothing to do with worms. It’s a fungal infection — aka dermatophytosis or tinea – of the skin and hair. It’s highly contagious, especially in young critters like puppies or kittens or toddlers, whose immune systems aren’t fully in gear. In humans, the lesions spread out in a characteristic ring shape, hence the name. The fungus produces infective spores that can remain, inert but just waiting, in the environment a considerable period of time. The usual mode of transmission is by direct contact with an infected animal.]

There followed a protracted discussion with our vet, her consulting veterinary dermatologist, and the owner of the private shelter. Could the hairs that fluoresced be old, inactive infections? Could she still be infective? What treatment had she received and how long ago? (Answer: more lime sulfur dips and oral meds than you would ever want to put a kitten through.) Could she have been cured and then re-infected? 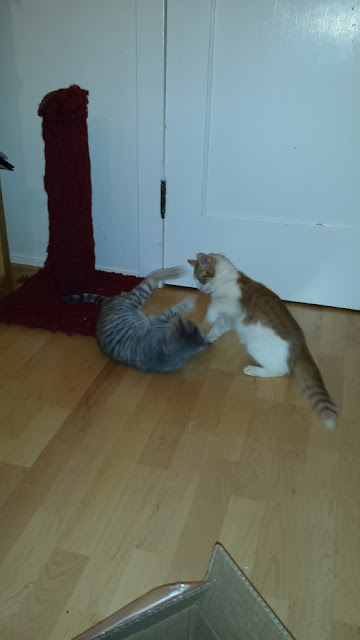 The kids at 5 months

the sure feline knowledge that there were cats out there somewhere and she wanted to play now), we decided the risk was small so we’d introduce her to the others. As before, Shakir was a gentleman, although one early encounter consisted of Sonja throwing herself on her back in front of him, screaming, and him looking utterly perplexed because he hadn’t touched her or growled or hissed, he’d only looked.

But it was the wrong call. You knew that, didn’t you? We found out when Sarah developed a spot of ringworm. Then another. Then I did. So yes, the kittens were infective.

Picture a mad scramble to take three cats to the vet. Gayatri really hadn’t had any direct contact, so we left her for last. Shakir was fine, but poor Freya had caught it. Back into isolation for both kittens, this time with a treatment plan:

Sarah swaddles Sonja after her shampoo

Sarah and I developed a shampoo routine, involving preparing 4 towels, timer, and so forth. I held each kitten while she shampooed and rinsed. She’s amazingly patient and gentle. The whole process took about an hour.

Two weeks later, Freya had exchanged one set of spots for another, and Sonja had new lesions. This was one tough fungus. Were we sure that everything in the office had been cleaned? It was time to up our game.

By this time, the kittens knew What Was Up on shampoo days. Their poor coats were all dry and rough from the bleach dip. It’s a credit to their sweet natures that neither ever tried to bite, considering all the awful things we were doing to them. Mine beloved spouse helped out with the vacuuming. 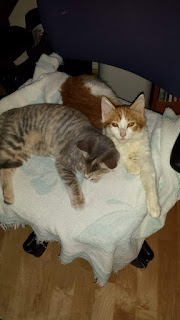 Next recheck, we were almost out of the woods. Both kittens were fluorescence-free. But as the vet said, if this were any other case we’d be done, but this is one hella resistant strain. So they’re still in isolation, although we’ve (Hallelujah!) stopped the baths and dips, gone to once daily topical on the last places there were spots, and vacuuming as before. The theory is that by the gold standard, fungal culture, Sonja was clear when she left the private shelter, so we might get a clear culture anyway. If there’s still a small infection, it should flare up when we stop the shampoo/dip, so that’s our experiment. If they’re still clear in two weeks, we’re done and back to reintroducing our pride.

If you have any secret influence over the Fungal Gods or Bast, please put in a word for our kitties.