↓
Home Menu ↓
Skip to primary content
Skip to secondary content
Home→family→Ponce Chronicles the Fourth: And Then There Was Dark

My wife and I have been in Ponce, Puerto Rico for two weeks, working on her mom’s house, which is now used mostly for vacation rental.

Everything is a blur, including some of the stray cats who dash by, nearly invisible. The to-do list has grown like triffids. Here’s Allysen’s rundown, before things started cascading:

She forgot to mention that the new 1000-gallon cistern for backup water isn’t working because of a problem with the pump. William, the pool guy works on it… and works on it… The needed part, of course, is not readily available. Still, he persists. 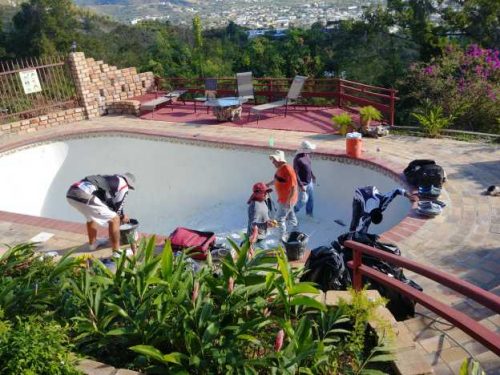 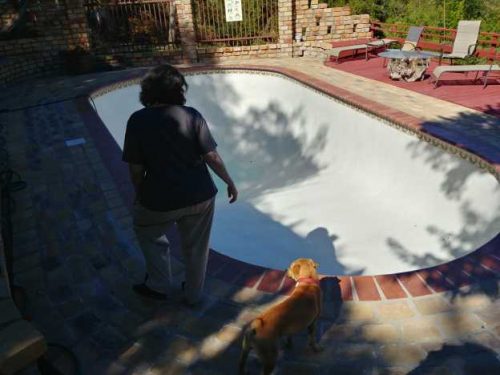 Triumph! (No, not the pump.) The pool has been replastered and refilled! Just before the city water pressure goes belly up on us again. Water has been weak and intermittent for days now.

Our daughter arrives to join us, and it’s her birthday. We get cake and ice cream. Upon opening the freezer drawer on the almost new refrigerator, we find the drawer won’t close. We are blasting cold air into the kitchen. The track is jammed—as it turns out, by a small loose screw lodged impossibly far into the mechanism. No way to fix it. The freezer opening is now closed off with plastic drop cloth and duct tape. Awaiting a repair visit from Sears. Yeah. The company that’s going under. Did I mention the fridge is new?

William finally gets the cistern pump working. Cheers and congratulations! An hour later, electrical power to the whole house goes bad, complete with sparks on the utility pole. We have enough power for lights, but not much more. No pumps, no micro, no washer… The electrician says it’s a bad ground (which he can fix) and a bad line coming in from the utility, which must await the power company. Have you ever waited for the power company in Puerto Rico?

Our major do-or-die project, after repairing the swimming pool, is repainting the master bedroom. Seemed straightforward enough, even though the walls and ceilings are pebbly cement and take forever to prep. But then we find the mildew behind the skimcoat on the outer wall, and hope goes out the window. A simple paint job has turned into mold remediation, external sealing, and replastering. Not for the first time I think, I hate painting. And… if I spent half as much time fixing the walls of my own house… (No, don’t think that way. Wrong thinking will be punished.)

As always, what success we have is thanks in no small measure to our neighbor Frances, who is Miles Vorkosigan’s mother Cordelia and Aunt Alys wrapped into one. (See Lois McMaster Bujold’s novels, if that doesn’t mean anything to you.)

Let’s end with something brighter. Here’s a little fellow who found his way into the living room and stayed just long enough for me to get a picture. 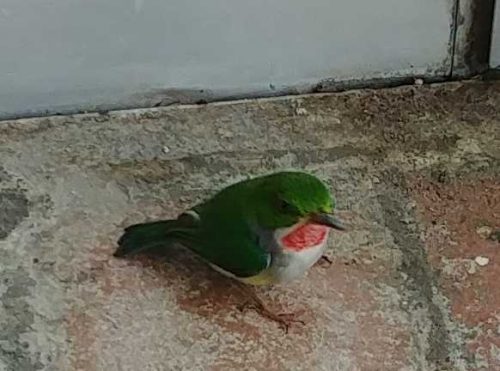 For the larger story, view earlier installments of the Ponce Chronicles.