Recently I flew across the country to attend my younger daughter’s graduation from medical school, so I loaded up my ereader with a few digital ARCs. Here’s what I thought of them. (The usual disclaimer: I received a review copy of this book, but no one bribed me to say anything about it.)

Seanan McGuire’s “InCryptid” series just keeps getting better, her world-building more detailed, and her characters growing and changing as they struggle against inner as well as outer demons. Antimony Price comes from a family of cryptozoologists, dedicated to the study, protection, and sometimes containment of “incryptids,” creatures like Bigfoot, but who live disguised as humans. The last episode, Magic for Nothing, sent Antimony undercover, infiltrating the Covenant of St. George (yes, the  dragonslayer), whose aim is the destruction of all incryptids, no matter how benign. While in disguise and investigating a traveling carnival, she met Sam, a trapeze artist whose natural form resembles a graceful simian. Sparrow Hill Road, a related novel, introduced us to the world of road ghosts, crossroads bargains, and route-witches, many of which play crucial roles in this new novel.

Now, at the beginning of Tricks for Free, Antimony is on the run from the Covenant and hiding from her family. As she says:

I never wanted my life to be a wacky sitcom about a human girl and her inhuman roommates struggling to get by at what many people consider to be the second-happiest place in the world.

She’s taken a job working for Lowryland, a not-quite-second-rate Disneyland. Sharing an employer-provided apartment are her friends Fern (a sylf capable of altering her physical density), who enacts one of the many Fairyland princesses, and Megan, a (Pliny’s) gorgon, who in real life is a medical resident. In between the byzantine company politics, trying to stay off the Covenant’s radar and also to not burn down the theme park with her increasingly erratic ability to set fires, Antimony unearths a secret cabal of witches and sorcerers bent upon harvesting the good luck of the patrons to boost their own power. Things go awry as one terribly unlucky accident leads to another. Then Sam shows up, as well as various ghostly aunts, and the plot races right along.

McGuire writes complex, interconnected series in which every (or almost every) volume stands on its own, fast-paced, absorbing, and satisfying. She weaves in backstory and setting with such a deft touch that the reader is neither baffled nor inundated by chunks of indigestible exposition. Although I had read Magic for Nothing and Sparrow Hill Road fairly recently and enjoyed the references, I think Tricks for Free would work just as well as an introduction. So even if you’re new to the delights of the InCryptid and road ghost worlds, dive right in for a great read. 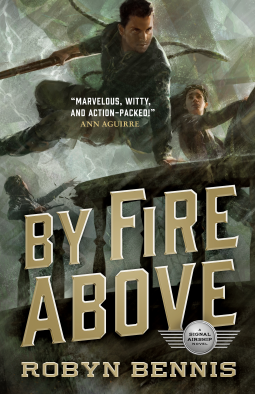 By Fire Above, by Robyn Bemis (Tor)

In this sequel to The Guns Above, Robyn Bemis continues the steampunk adventures of a woman airship captain.  Once again, Josette Dupree, captain of His Majesty’s Signal Airship Mistral, along with her intrepid crew and not-so-intrepid supercargo, aristocrat Lord Bernat Hinkal, have been given an impossible mission: with glamorous but woefully inadequate repairs to the airship, she is to play a largely ceremonial role at the capital city. None of the real damage the airship sustained in the last batter has been repaired, including the “steamjack” engines. The bags are filled not with expensive, inert luftgas but explosive “flammable air,” a very bad combination with an engine apt to throw off sparks. Needless to say, Josette is unprepared for the courtly intrigues into which she is suddenly propelled (and with which Bernat, who grew up in such a milieu, is happy to reverse roles and become her guide). In the air, conducting a battle in three dimensions, Josette is as cunning as she is courageous. But thrown into the viper’s nest of courtiers or forced to face her own romantic feelings for Bernat’s brother, she finds herself all too fallible.

Josette has no intention of becoming a trophy hero and soon maneuvers to lead a mission to free the border state where her estranged mother (and Bernat’s lover) lives. From there, one mishap after another balloons (excuse the pun) into disaster.

As in the first adventure, I was impressed by the detailed construction of the airships, as well as the scientific (hooray for physics and chemistry!), mathematical, and engineering principles involved, as well as the strategies when battles are fought in three dimensions (up/down as well as side/side and forward/backward). The action sequences were breathtaking. My reservation, as before, pertains to the creation of a political geography so akin to Western Europe that it made no sense to not use the actual nationalities and thereby avoid reader confusion with made-up names and cultures. That reservation aside, I heartily recommend the series and hope to see more Josette’s unfolding stories (and I expect to see her, like Horatio Hornblower, become admiral one day). 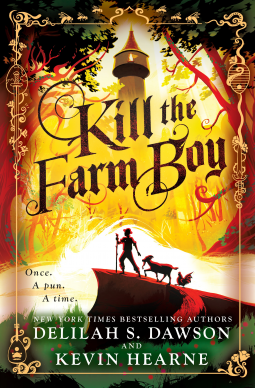 These days I’m on a Kevin Hearne reading spree (see my reviews of A Plague of Giants and The Squirrel on the Train) so I dove into Kill the Farm Boy, discovering to my delight that Hearne’s co-author, Delilah S. Dawson, is none other than another of my recent favorites, as Lila Bowen author of the excellent “The Shadow” series. Delight rapidly gave way to hilarity as this story unfolded, tackling one fantasy trope after another, turning them on their heads and planting petunias between their toes.

The titular farm boy is Worstley, younger brother of Bestley, who had been stabbed in the heart by Lord Ergot (if you don’t know what ergot is, pause now and look it up) for being too handsome. When a malicious pixie named Staph (aureus?) casts a spell to change Worstley into the Chosen One (and gives Gustave the goat the ability to speak, which he does in smart-ass style), it does not set well with The Dark Lord Toby (whose most powerful spell causes baked goods to rain from the sky). Opposing The Dark Lord Toby’s nefarious, yeastly plans are Fia, a 7-foot tall barbarian warrior, and her sweetheart, Argabella, a woman enchanted to be a half-rabbit, who incidentally is the world’s worst bard:

She … sang an improvised song of obfuscation:

We are not food

Oh gods we are not food

You gotta believe me

It’s hard to beat that.

The silliness isn’t restricted to spooks of characters from pose, verse, and film (although familiarity with J. R. R. Tolkien, Lewis Carroll, The Princess Bride, The Wizard of Oz, Grimm’s fairytales, Conan the Barbarian, and Norse mythology, to name a few, enhances the humor).

I found that I couldn’t read too many chapters at a sitting, but the play of tropes, not to mention the puns, kept me coming back for another fun visit to the Lands of Pell. 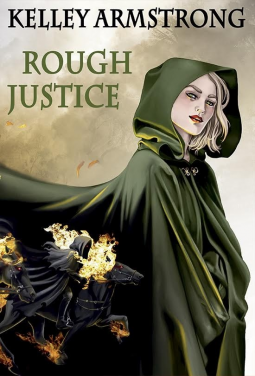 Continuing stories that center on the same cast of characters, advancing their relationships yet complete in themselves, face a number of hurdles. Whether linked short stories, novellas in this case, or entire novels, they must furnish enough backstory and setting to orient the reader. The first episode is in many ways the easiest; everything is new, nothing taken for granted. Often the protagonist explores the world via the plot, taking the reader along. In subsequent stories, the task requires progressively higher levels of finesse to give the reader the necessary history and detail in a smooth, unobtrusive fashion without interrupting the dynamic flow of action. Too much information will becalm the reader in a Sargasso Sea of exposition; too little creates disorientation and puzzlement.

At the same time, each story must stand on its own in terms of plot: inciting event, reversal, tension building to a resolution, and so forth. Not all ends need to be neatly tied up, but the reader should finish with a sense of satisfaction.

Rough Justice succeeds to a greater or less degree in these areas. Two concepts drive the story: a set of characters, avatars of ancient Welsh figures, who lead the Hunt, giant black red-eyed hounds and all, while wrestling with their previous incarnations and present lives (an attorney, a PI, and an ex-biker, all living just outside present day Chicago); and a very nifty murder mystery, complete with twisty turns, devious motives, and red herrings. PI Olivia (“Mathilda of the Hunt”) is on the brink of ordering the deadly finale to her first Hunt when her qualms allow the condemned man to escape. The Huntsmen claim to have an infallible supernatural method of determining guilt according to their “rough justice,” but Olivia isn’t convinced. She and her lover, attorney Gabriel (Gwynn in the old story) investigate what turns into a double murder/coverup/setup. That part is sneaky enough to please anyone who loves a puzzle.

The problems arise with the way the ancient Welsh myths play out in the lives of Olivia, Gabriel, and Ricky (Arawn). There’s an enormous amount of backstory and lore including how these three learned of their past lives, their roles in the Hunt, history and rules for same, the romantic triangle between Mathilda, Gwynn, and Arawn and how it relates to Olivia, Gabriel, and Ricky (or not). Plus the personal stories, relationships, and dark secrets of the three modern characters. This is where Rough Justice succeeds less well.

A certain amount of this setting and history is of course necessary but much more is presented in ways that paralyze the forward momentum of the pot. Although the story opens with the dramatic Hunt, it’s soon bogged down in backstory and long discussions of why the head Huntsman would set newbie Olivia up with a questionable verdict (and the question of whether the Huntsman is manipulating Olivia is never resolved).

On the other hand, Gabriel’s abusive, now-senile mother is being cared for by two women whose roles and relationships were never clear to me – family, professional caregivers, or fae guardians who strangely know little of Gabriel’s childhood? Therein lies the problem of trying to develop novel-length subplots in novella-sized chunks while reiterating everything that has gone before.

The setting and characters are intriguing enough to interest me in searching out the earlier installments of “Cainsville Tales” and certainly looking out for newer ones, especially if they contain similarly fascinating mysteries, but I can’t help thinking this tale would work better as a single-volume novel.