(Third in a series. Here are parts One and Two.)

One of the striking things about Ponce, and I guess much of Latin America and the Caribbean, is that there’s so much beauty right alongside the poverty. I don’t always notice, because we’re so focused on working to fix things up. (This seems to involve a minimum of one to two trips a day to Home Depot, which I know much better by now than the Home Depot at home.) In my driving to and fro, I see a lot of the poverty and some of the demolished buildings, but I also drive past the lovely, modern Museo de Arte de Ponce (art museum, where Allysen’s mom used to work), and the old architecture of the Plaza.

A couple of nights ago, we went out to our favorite restaurant, Vistas, which has rooftop dining and a gorgeous view of the city. Here’s the skyline. 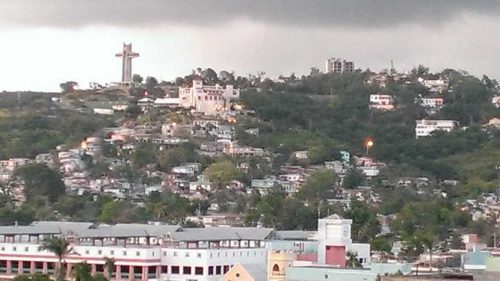 Up on the ridge, you see the giant cross, Cruceta del Vigía, which you can go up in to look out over the city. Just to the right of it is the Castillo Serrallés, which is a mansion originally owned by the Serrallés family, makers of Don Q rum. Those two structures are visitor highlights, and along with them is a Japanese garden (although I’m not sure it survived).

You can’t see our house, but it’s up there on the same road, a little above and to the right of the Cruceta. The “modern” building further to the right of La Cruceta is the last structure at the top of the hill—an abandoned hotel. In its heyday, Allysen’s family lived in that hotel prior to building the house. (Her dad worked for G.E.’s international division, which is what brought them to Ponce in the first place.)

Here’s what lay directly below us on the restaurant terrace: the old fire station and museum, and an old Spanish church, in the center of the Plaza. 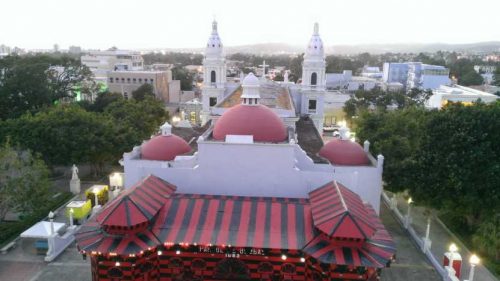 A consolation of the loss of so many trees to Maria is that our view from the house is now less obstructed. I remember on my first visit here, back in the 1980s, watching a small plane come down over the hills, and following it all the way to its landing at the airport on the far side of Ponce. Then the trees grew higher, and we could no longer see the airport. Now we once again can watch the (limited) airplane traffic into town. There’s been a spate of military transport planes landing and sometimes circling, and I’ve been wondering if it’s been a bunch of planes bringing in supplies, or a single plane practicing landings.

Here’s the view in daytime. If you enlarge this image, you can just make out the array of windmills off in Coamo. I do not know how they fared in the hurricane. 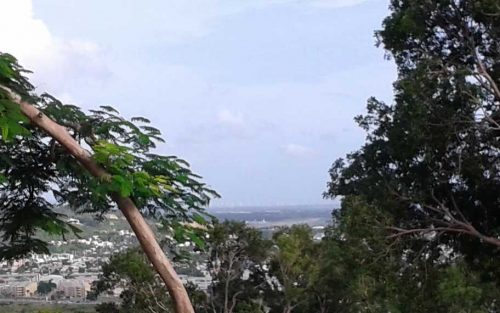 Speak of the devil. As I typed that paragraph about the airport (at 1:30 a.m.), I saw bright lights coming down over the coast and touching down. Too early to be JetBlue. Who was it? I wonder. Aliens?* Coming to find the best tostones?**

*Nope, my bad. It wasn’t aliens; it was JetBlue from Orlando.

**In past years, the best tostones in town were to be found—I swear this is true—at Denny’s. Yes, that Denny’s. This year, the title might be up for grabs. The ones at Denny’s are still good, but no longer great. Sic transit gloria mundi.