It’s late summer and the garden keeps giving. This afternoon I picked a basketful of cucumbers: Russian Brown, English Telegraph, and lemon cukes. The Russian Browns are nice in that, like the lemons, they don’t get bitter. When they’re ripe, the skin turns rich brown and sometimes gets crackles. We will eat 1 or 2 per bowl of salad. (you can see a little container with purslane from the garden at the upper left.) 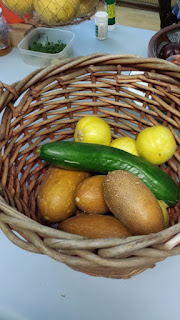 Then there are the pear trees. One is a Comice, the other a variety we haven’t been able to identify. It’s a little like an Asian pear but tastes terrible raw. When cooked, however, it is flavorful and intensely sweet. 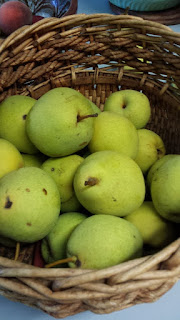 I picked a couple of baskets, including bird-pecked ones, chopped and seasoned them with cinnamon, cooked them until just tender, and canned them in quart jars. I brought some extra to a gathering at the home of a friend, where they were much enjoyed. Some years I will slice and dry them, too — sweet as candy — but I still have some left from last year. 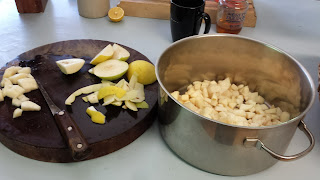 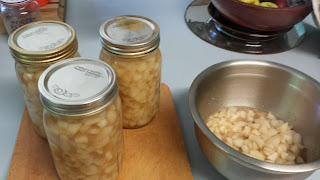 This process will go on for a while, many quarts’ worth, as the “Asian pear” tree bears heavily. I’ll refrigerate the Comice pears to eat fresh.

Then there are 2 apple trees…but those are fine when chopped, tossed with a little sugar and ascorbic acid, and popped into ziplock bags and the freezer. They are slightly spongey that way but go wonderfully in oatmeal, where the cooking softens the texture just right.