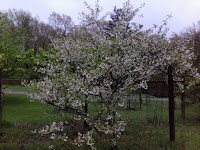 The drought last year and this wet spring have been significant enough I thought it worthwhile to revisit our little farm.

As my two readers might recall, we had a multi-century drought last year. With the precipitation since last summer, the snow pack and rains, that drought has been rescinded.

A month ago (see here) I was cautiously optimistic that this year might be better than the last. Now, it’s a maybe yes, maybe no.

As I said, the apricots did not put out a single blossom. I had hopes some of those nubbins might show up but no. The good news is that they appear robust in growth. So: next year. Looks good. Fruit set on the peaches, nectarines, almonds, plums, pears, cornelian cherries. Flowers just showed up on the grapes. Nothing on the kiwi. Anybody out there ever see a kiwi bloom? Let me know. I’ve never seen our kiwi bloom.

The caterpillars showed up en masse. Tents. Greens. Gypsies. I decided not to stick with Surround but to go with the hard stuff: Captain Jack’s Dead Bug Brew.

The Brew’s active ingredient is spinosad,

Spinosad was discovered from observation of the bacteria, Saccharopolyspora spinosa, discovered in a sugar cane rum still. With a heritage like that, how could one go wrong?

Spinosad is an insecticide and operates as a neurotoxin. It interferes with acetylecholine and GABA transmission. It, apparently, binds to the neurotransmitter sites of insects. It appears to have a low toxicity to mammals.  It is moderately toxic to birds and fish and moderately toxic to aquatic invertebrates. It is highly toxic to bees. (See here.)

So: we sprayed with the Brew only on plants that were not themselves in bloom nor near other plants in bloom. Those, we sprayed with Surround only. So far, we’re not worrying about the garden but as soon as we have a bloom there, the surround trees go back to Surround.

We were unable to spray much, though, as we’ve had rain, rain, rain all the month of May. Even with the limited spraying, many of our apples (always the worst hit) have actually born this year. The stone fruits don’t seem to have the same problem with caterpillars as the other trees. We have plums this year but the caterpillars don’t seem to bother the fruit. Other bugs do.

I do think I’m going to seriously trim the tops of the trees if we’re going to do this much spraying. Right now I can’t reach the tops and that just leaves caterpillars for seed.

Spinosad is, supposedly, recognized as an organic insecticide. It doesn’t seem to linger too much and, as I said, We Mammals aren’t much affected. That said, calling spinosad “organic” raises questions about what “organic” means.

The Sun Joe tiller I spoke of last time performed beautifully– with, of course, some caveats. I think it’s worth reporting here.

First, there’s a common thread between electric garden machine and gasoline garden machines. This is true, I think, for tillers and mowers. Electric chain saws have all of the assets and flaws of regular chain saws minus the issues of an internal combustion engine.

That is, the tillers and mowers are between 5 and 10 times faster than their gasoline counterparts. Essentially, gasoline engines as implemented in these garden machines operate on a low speed high torque principle. The electric machines seem to operate on a high speed less torque principle. Not that you should try to stop that electric motor with your hand. Or, if you do, make sure someone finds the lost limb. They’re doing great things with reattachment these days.

Our old gasoline tiller rotated at a stately four rotations a second or so. The Sun Joe seems to run about 10. However, we could take the old tiller and bear down on a tough section of dirt and it would grind down and dig up all of the rocks. If it hit ledge, it would just rub against it until we figured it out and moved on.

It bent back all right. But it was a wake up call. The Sun Joe will still go down as far but the user has to be sensitive to what it’s doing. I found that if I let it go forward and then pulled it back as it was turning, I got a very good turn of the dirt. That would have been prohibitive with the old tiller. It was just too dang heavy.

The Sun Joe is quite light– my wife could pick it up easily. It worked fine. It did the garden in about the same time to (maybe) a slightly less depth. And with much less wear and tear on me.

Sun Joe: A win! Though, we’ll see how long it lasts.

We didn’t irrigate the main garden as we thought. With all the rain we thought it unnecessary. We might try that next year or revisit it later in the season.

Still too cold for beans. Corn is in along with basil and tomatoes and the different squash. Everything is growing. Hopefully, we’ll get more warmth and sun.