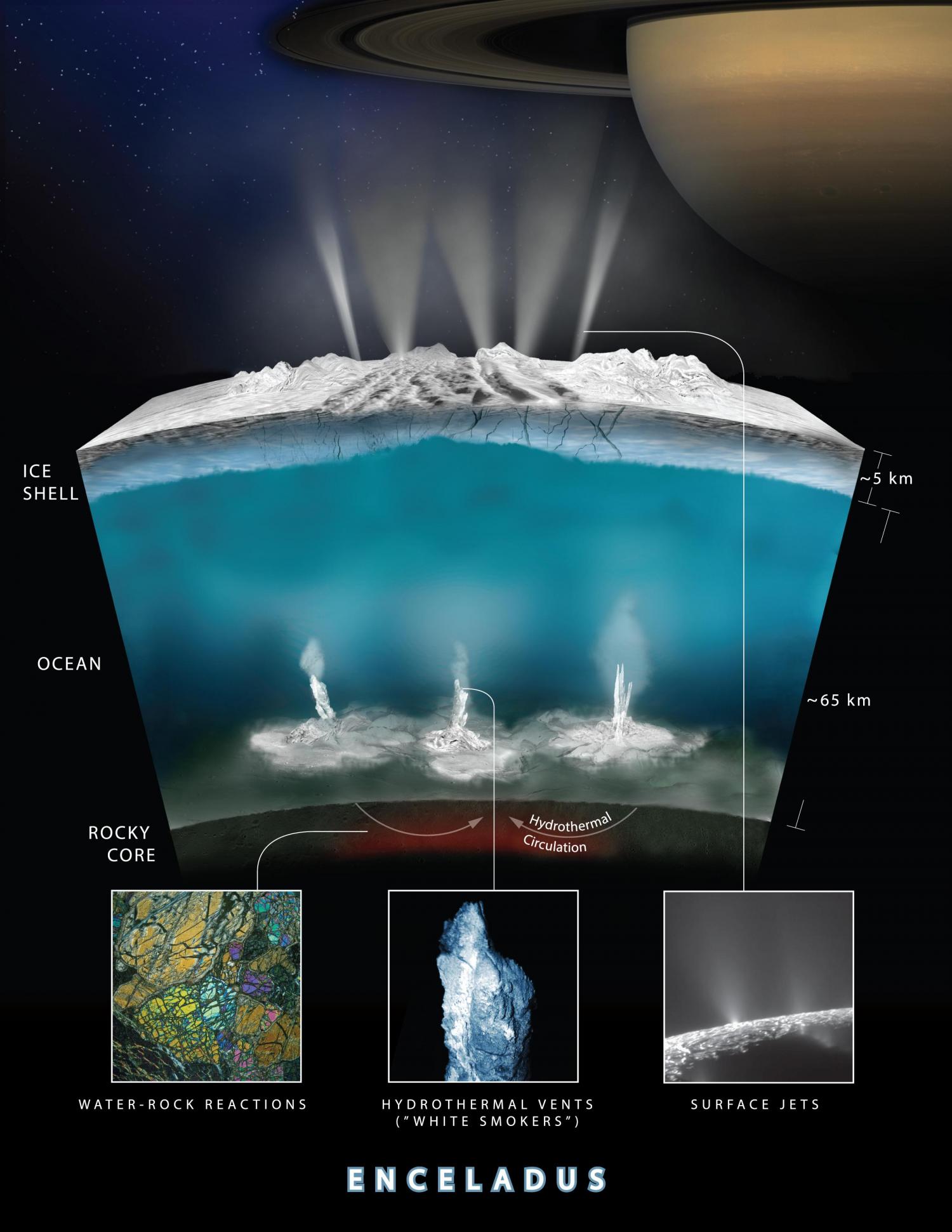 NASA has announced some new findings from the Cassini probe. In 2015, Enceladus produced a geyser that Cassini managed to fly through. In its mass spectrometer, it detected molecular hydrogen. This is hydrogen that is only bonded to itself and not with other materials or in an ionized state. (See here.)

Before we go too far, we have to talk about Enceladus.

Enceladus has no atmosphere to speak of. It has a 5 kilometer icy shell floating on top of 65 km of ocean with a rocky core at the center. For contrast, the deepest part of the ocean is the Challenger Deep that is only about 11km to the bottom. Water pressure there is about 1000 atmospheres. However, on Enceladus the gravity is much weaker. I found this page that estimated it to 7.5 megapascals but presumed it was only 32 km deep. Doubling that and converting it to atmospheres, it’s 148A or about the equivalent of 1.5 km on Earth.

Also, going down 62 km on Enceladus is a significant portion of Enceladus’ radius (250km), so the gravitational attraction of the mass above begins to counteract the force from below. How much depends on the mass of that rocky core.

Enceladus has cracks in it and on occasion is spews out plumes of material– mostly water but some additional material. Cassini managed to navigate through on of the plumes.

(As an aside, this is one of the many gripes I have with the film Europa Report. The explorers get dragged under the ice on Europa by aliens. If the ice were broken, there would be an explosion spewing the water, aliens and explorers hundreds of kilometers into space. But what of that.)

The thinking is that Enceladus is heated by tidal forces, which is what keeps the ocean stable.

Now, back to the article.

Cassini found molecular hydrogen. Hydrogen is a very chemically active element. Molecular hydrogen doesn’t last long. It gets ionized in space. It binds with oxygen. (Note: the Hindenburg.) It binds with carbon– most of the carbon in your body has some hydrogen attached. So having it show up out of Enceladus is a Big Deal.

The current idea is that it was created in the equivalent of thermal vents at the bottom of the Enceladus ocean– sort of like hydrothermal vents on earth. This is exciting for a lot of reasons. For one, it confirms that Enceladus is an active moon. For another, it provides a food source for possible life forms. We have hydrogen oxidizing bacteria here on earth. Some of them have been found around hydrothermal vents. (See here.)

So this is exciting stuff.

But– and this is a big but– Saturn is twice as far as Jupiter and Europa has water vapor plumes just like Enceladus.

So we have not one but two oceanic candidates for life in the solar system other than earth.