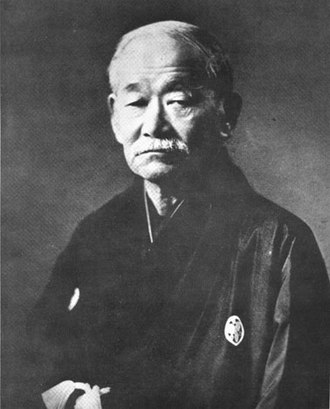 When I was in grade school, in California, my father enrolled me in a judo class. I have no idea why he did it—in fact, it was done so early in my life it seemed completely natural. Who wouldn’t, right? I never even thought to ask him why he did it until after he was dead and I couldn’t.

I loved it. Imagine wrestling as an art form. Chokes and pins as things of beauty. Learning to fly to the air and fall without pain—well, mostly without pain. I don’t remember much pain then. I had to grow older to get that.

I revisited Judo briefly in college and then left it until about six years ago. My son had left gymnastics and asked what sport he could try. I mentioned Judo and he tried it and stayed with it for a while. He was beautiful at it. About a year later I succumbed to the draw and started as well. He left it later but I’ve kept at it.

But it’s hard to talk about judo without knowing what it is.

Kano had studied jiujitsu—an older form of Japanese unarmed combat—much of his life. This turned out to be difficult because many Japanese thought that jiujitsu was outmoded and no longer useful. Kano didn’t agree. When Kano opened his school he called is discipline judo, in part, to break the association with jiujitsu. But also because he’d come to embrace two concepts that he felt had relevance to modern Japan and the world:

Kano had adopted three basic categories of techniques from jiujitsu: throwing techniques where an opponent was brought to the ground, pinning techniques and submission techniques including chokes and joint locks. But he adapted them to be used safely.

For example, one jiujitsu throw involved using the arm with the elbow open—pretty much insuring that the joint was broken in the throw. The throw was modified such that this didn’t happen. Joint locks were restricted to the elbow only—much more easily controlled—and done in a manner that allowed the opponent to surrender. Chokes were changed from the windpipe to the neck—carotid pressure which can cause unconsciousness if the opponent does not submit but doesn’t cause permanent injury. Teachers step in to prevent even that. Throws involve falling from height so Kano introduced ukemi—the technique of falling.

A side note: about two years ago I stepped off the curb, slipped and fell forward. Instead of a face plant involving at the very minimum a broken nose, I hit the concrete in a perfect judo front fall. It hurt but I was without injury. Judo works.

Judo techniques are much more about timing and leverage than strength. It doesn’t have to be a young man’s sport. In my current dojo, one sensei (teacher) is in his fifties and the other is seventy. We have two other seventy year olds, one is a beginner and the other is a brown belt studying for black. It’s no secret I’m not young. We also have a thirty-three year old who regularly mops the floor with me but sometimes I get him back. The fact that there is a discipline where I can compete with a younger man nearly half my age and do okay is pretty amazing.

This all goes back to Kano’s two principles. The techniques reflect maximum efficiency and minimum effort. But they are connected to mutual welfare—you can’t play with an opponent if you break him. And you won’t get better without an opponent. Judo requires two players. It is an intimate discipline: you spend a lot of time in close physical contact with your co-students, teachers and opponents. It’s impossible to play judo alone.

This is what attracted me to judo all along. Few human endeavors are without ego. Judo is no exception. But judo is one of the few disciplines that structurally embodies cooperation. You must help your fellow student learn—he is essential for you to learn. And you must protect your opponent from injury insuring that he will protect you from injury.

Kano realized that the physical concepts he was teaching in his dojo had a larger philosophical and moral dimension. This is an excerpt from what Kano said in response to judo being considered as n Olympic sport:

“… judo in reality is not a mere sport or game. I regard it as a principle of life, art and science. In fact, it is a means for personal cultural attainment…Judo should be free as art and science from any external influences, political, national, racial, and financial or any other organized interest. And all things connected with it should be directed to its ultimate object, the ‘Benefit of Humanity’.”

This concept is attractive to me.

There’s a tendency—at least in the United States—to narrow the definitions associated with affection. There’s family bonds, some kinds of friends, bands of brothers and sexual love. I think human beings are far more diverse in their emotions. What ties together a judo dojo is a bond of affection that is local to the dojo but extends from it. It’s not the band of brothers military thing where other people are willing to die for you. And it’s not an intense colleague relationship where people on a project put their marriages at risk for some accomplishment.

I’ve done other martial arts and it’s been an intense experience—notice, please, that I’ve not called judo a martial art—but this is different. There is a close and personal bond based on something that we are all aspiring to do and for which we are all absolutely essential to one another. Is that love? I don’t know.

There’s a free sparring component to judo called randori. At this point, people pair up and use what they’ve learned against one another. We get thrown, pinned, choked and locked a lot. But if you go to a boxing match or MMA fight or wrestling or tennis match and watch the losers you see anger, grief, humiliation, embarrassment. In randori, you see someone say nice. That’s the difference.

That happened to me last Thursday when Young Steve (I’m Old Steve) took me down in a yoko wakare. (Picture at left.) I was saying nice! as I was going over. Then, I got up and we went at it again.

It’s not all roses and carnations. As my sensei says, we’re not playing badminton. I’ve had some injuries in judo. Usually it was because I did something stupid. For me, half of understanding judo is learning not to do something stupid.

But it certainly feels great when my opponent—or my teacher—says nice when I do something right. It feels even better to say nice to someone else for the same reason.

And that’s why I’m there.