Remember when I said the larger plants– the trees, grapes, etc.– seem to be weathering it okay so far? Well, “so far” isn’t so far anymore.

First, of course, is though we’ve had some rain the drought continues. Some of the trees are showing stress. These are trees such as cherries and some of the pears. One pear in particular has gone completely yellow and is dropping its leaves a month early. We’re hopeful that the trees that are doing this are just giving up the summer and not giving up the ghost. We won’t know until spring.

Trees have a blessing and a curse: they reach deep so drought takes longer to reach them. But when the deep water recedes it takes a long time to get it back.

I had been hoping that we’d have enough rain to catch up with the loss before the trees felt it. It didn’t work that way. Many of the trees are okay depending on species and location– all of the espalier look okay, regardless of type. I don’t know if this is location or the nature of how trees are trimmed during the process.

I didn’t anticipate the other problem we’ve had.

The thing is, we’re not alone in the drought. All of the wild animal life are experiencing the same thing. Many birds are now gathering for southern migration– not exactly early but they are certainly not lingering. About two weeks ago the Marechal fochs were a week from harvest. I came home and every grape was gone. 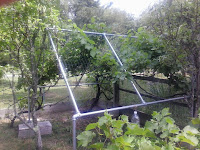 They were plucked directly from the vine without a wasted fruit. We’ve always had a little competition from the turkeys and the wasps. I rebuilt the arbor to discourage the turkeys. It worked pretty well though they still menaced the grapes on the surrounding fence. But turkeys leave a lot of debris and torn leaves around. So this wasn’t them.

Wasps, too, like to get the grapes. Often, I’ve been harvesting grapes in a cloud of yellow jackets. Not stung. Yet.

But wasps eat around the seeds and leave the skin behind. These were plucked cleanly.

I think it was small, migratory birds that cleaned me out. Birds desperate enough to eat anything.

About a week after that, the Concords started scenting the air. The birds didn’t target them yet. I don’t know why. Perhaps the birds that took the M/F were already gone south. Or perhaps the Concords were less visible or didn’t interest them. No idea.

But the hornets figured out there were good things to eat.

The Concords were a week early but I decided in favor of an early harvest against no harvest at all. So, that night, I harvested the vine by flashlight. (Yellow jackets I can bluff. Hornets have no mercy.) So we have about fifteen pounds of just-prior-to-full ripeness Concord grapes in the freezer downstairs.

A couple of years ago I spoke a little about making a drinkable Concord wine. (See here.) I can now do it pretty predictably. I’ll tell you my secrets:

The last act of farming for the summer was the changing of the canopy.

We have a polyethylene cover greenhouse. Essentially, it’s a steel hoop frame over which we put two polyethylene sheets. Then, we have an electrical inflator that pushes air between them, giving us insulation. In it, we grow bananas, papayas, tomatoes, broccoli, strawberries– well, you get the idea.

The problem with polyethylene is that it breaks down over time under the UV light of the sun. So every four years or so we have to replace the sheet before winter. To have it break apart during winter would be catastrophe.

This involves pulling off  the old sheets to be recycled in some way and then pulling over the new sheets. The roll holding both sheets is about 200 pounds. Dragging the sheets over without damaging them is a chore we put off as long as possible.

We did it yesterday. The pictures are above. You can see the banana trees fairly easily in the upper picture. There’s also a bush roughly in the middle that’s a strawberry guava. Behind the greenery are the other fruit trees and the aquaponics. The lower picture shows the finished product, all nicely inflated. The excess will be trimmed and used in other projects.

That’s it for the year. We’re looking into irrigation pipe for next year and figuring out how to make the farm a veritable killing field for caterpillars. The town is thinking we’re going to have these conditions for the rest of the calendar year.