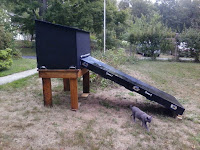 The project I’ve been working on over the summer has been completed. That’s it to the side there. The dehydrator itself, the area where the fruits, vegetables, etc. are actually dried is the big box. The long thing is the heat collector. The box is about 4.5 feet wide and three feet high. The collector is three feet wide and eight feet long.

We try to live within our means. By this I don’t just mean we live within a monetary budget. I mean we try to grow as much of our own food as we can, consume as little outside energy as we can, reuse materials where possible. We have old cars and an old house. There is an ecological component to this but mostly it’s because we’re cheap as hell.

About four years ago we committed to put up the money to buy solar panels for our house. We bought them so we own the energy that comes in and own what are called SRECs (Solar Renewable Energy Certificates) that come along with it. (See the link to describe what they are.) This means that no only is our utility bill tiny but that we can sell the SRECs at a profit. In the last few years the SRECs have paid for the energy cost of our greenhouse.

This makes me very happy.

But we live in New England. While it’s all well and good that we have covered our electrical energy budget, we still burn a lot of energy to heat the house over the winter. We shifted from oil to gas a few years ago but I’m not terribly sanguine about using gas, either. It’s low cost is artificial and it’s not doing the planet any favors. So I’ve been casting about for some way of handling the cost of heating.

We’ve done most of the normal things: insulate the attic. I built inserts for the old windows to use in the winter that cut heat loss through the glass. But that works on the efficiency of heat loss but doesn’t address heat production. We heat a fair amount with wood. That’s nice because it’s burning recent carbon into the atmosphere rather than fossil carbon but it’s still carbon.

I kept coming back to the greenhouse: hot as a jungle in the direct sunlight even when it’s twelve below outside. Clearly, solar heating has possibilities.

We couldn’t pipe the heat back to the house. The distance was too great to do it efficiently. That meant whatever we did had to happen at the house itself.

Our house is what’s called a front entrance colonial. Two stories tall, flat front with a doorway in the center. When the house was built (as a speakeasy brother but that’s another story) it had a full sized porch but over the years the porch rotted away and was removed. Now there is just an entrance porch to the door.

We have an avalanche after every snowfall.

This meant a couple of tons plunged down on whatever was below it– be it bushes, porch or bystander– all at once. The bushes look terrible every spring and after the first couple of snows, it’s a packed glacier. The front entrance becomes unusable and we do all our comings and goings from the side entrance.

Clearly, we need a porch so we can use the front entrance in the winter and keep from eventually destroying any structure in the front of the house. It would have to have a metal roof, too, to handle the impact.

Metal roofs get hot in the sun. Hmm… Could I kill two birds with one stone? Could a metal roof absorb enough heat to supplement the heating of the house?

I did a little research and found a few designs. Here is a general design for a solar space heating system.  Here is one that uses metal roofing coupled with a liquid heat transfer fluid.

One of the critical features of heat transfer is the nature of the fluid used. Most heat transfer systems use some liquid for heat transfer– propylene glycol is one. It’s related the ethylene glycol used in in your car radiator except it’s not toxic. Water can be used– not up here in the Frozen North but it’s commonly used in the south. Brine. Etc.

I was interested in using air as the fluid. Air isn’t as efficient as liquid but it has the virtue that it is free, abundant and if it leaks there’s no mess. (See here and here.)  The porch would be about thirty feet long and about ten feet wide– three hundred square feet of potential heat collection. Even a fairly modest heat transfer would provide some significant BTUs.

So we discussed the whole process. The idea of building a large porch with a metal roof was somewhat daunting. The idea of building one with untested technology was even more so. Besides, even if we built a good collector, how would it transfer heat to the house? (A problem I’m still wrestling with.)

We decided to run an experiment.

We had wanted a solar dehydrator for a long time and I’d worked over several designs. I’d come up with the idea of a dehydrator that could run on electricity or solar. That way we could run one in the winter as well as in the summer. I hadn’t built it mainly because of time and because I hadn’t come up with a building technique that satisfied me. Building with wood is fine but wood is heavy for a structure to bring in and take out all the time.

We married the experiment to the solar dehydrator– giving up the idea of double duty in favor of seeing if the porch idea would work.

The dehydrator is in three parts. The collector, the box and the support. The support was easy so we’ll neglect it.

The collector is a frame box with a top of galvanized steel painted black. The back is insulated with two inches of foam.

Why that design? you ask. Isn’t it better to have a clear front and capture the energy that way?

Well, yes. That is far more efficient in terms of energy collection.. You get double the effect. No only does the light come in and heat the black back, the re-radiation of infrared is captured by the transparent glazing. (Not unlike global warming. Hence, the “greenhouse effect.”) But remember, this experiment has to also emulate being able to take a high impact snow load. There aren’t any glazings I know of that will take the avalanche.

The box serves as both dehydrating chamber and chimney. The air comes in from the bottom of the collector, passes into the box and exits out the top.

We put it together today and it’s now standing out in front of our house infuriating our neighbors and lowering our property values. Hey. We own the place so who cares?

I’ve instrumented the box and collector. We’re getting good heating inside the collector– up to about 140 F. I’m not so please at the heat transfer between the collector and the box. I’m getting between 15 and 20 degrees above ambient. Right now it’s passive but I think a small muffin fan might help. It’s also still pretty hot outside so the heat differential between the box and collector isn’t as great as it could be in winter. Be interesting to see hat happens to the box temperature when ambient is below freezing.

But the building is accomplished and the experiment has begun. I’ll be taking regular measurements over the winter to see if the experiment is successful.