I’ve been perusing the depths of Amazon Prime and Netflix to see what sort of odd little films they serve up.

One piece of advice: for good or ill, I have found absolutely no correlation between the rating of these films and what I think of the quality of the films. The only way I’ve found to see if they’re any good is to watch them.

That said, fortunately a film will announce that it is a dog early on. But there were a couple that kept showing promise right until the credits and you knew: there goes two hours I will never get back.

These, however, were pretty fun.

Or, as stated on the poster, Looking for Life and Love on Mars.

It’s one of those tongue-in-cheek, ironically detached films that are quite popular these days, though this is the first time I’ve seen it in a science ficiton. It has Kinky Friedman as the US President.

Boy and girl go to Mars with a oddball billionaire, discover Martians and return in love. Boy is sent because he’s the best looking astronaut. The actors have a tendency to notice at intervals that they’re in a film but it’s done in a gentle, mocking way and is not offensive. At no point do they act like the audience is an idiot. Instead, they expect the audience to be participating in the experience. “Look, folks, we’re having a movie” sort of thing. I found it charming.

Here are a couple of youtube videos both showing and discussing the film. Here, here and here. 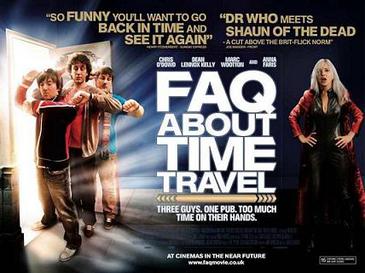 This little gem is the product of the twisted minds of Gareth Carrivick and Jamie Mathieson. Think Shaun of the Dead meet Gerrold’s The Man Who Folded Himself. Three friends get unstuck in time via a time hole in the loo of a pub. All sorts of misfoldings occur while they are “helped” by a bumbling low level time travel bureaucrat. Like Gerrold’s book, they pretty much run through all of the different tropes and like Shaun, it’s loads of fun.

John Dies at the End

Don Coscarelli did this one. This one is less slapstick and more irony– sort of like Mars but with Lovecraftian horror rather than space travel. Again, the fun is in the surprises. It’s also the only film I’ve ever seen where an amputee is in the script as important and funny at the same time.

There’s also a little time travel in it when David, the main character, gets a future call from his friend John right after he’s found John’s dead body. John– on the phone– isn’t quite sure what time it is and asks in all innocence: “Am I dead yet?”

Trailer here. But it’s funnier than the trailer would suggest.

It’s not clear if Jim Jarmusch still has his indie creds. Not that he isn’t a completely original filmmaker. He absolutely is. I’ve been a fan since Dead Man— which I still maintain is one of Johnny Depp’s more compelling performances. But if your work is being added to the National Film Registry and you can make a film with Tom Hiddleston, John Hurt and Tilda Swinton, aren’t you by definition mainstream? Not that Jarmusch has sold out. He hasn’t. His films are just as interesting (and sometimes incomprehensible) as they ever were. But it seems the audience has caught up with him.

Anyway, OLLA is a vampire film that dwells on the ennui of age– not new territory for vampires in general. But in this case the vampires are obviously more alive and conscious beings than humans and the destruction of the world by humans is the source of the ennui.

It’s a lovely film. I get the feeling that Jarmusch had gotten pretty disgusted with the vampire genre and decided to flip the tropes. He does an excellent job.

I’ve left the most interesting to last.

Ink is about a father and child out of touch with one another. The premise is that the world of dreams is divided between storytellers and incubi. Storytellers give us the good dreams and incubi give us the nightmares. There are other post-dead creatures in between. One of them, Ink, kidnaps the soul of a little girl. The storytellers try to get it back.

As the story goes on the backstory gradually fills in the whys and wherefores and I will not tell them here. The blend is good.

The film was written, directed and musically composed by Jamin Winans. He has another film on Amazone: The Frame. I can’t wait.