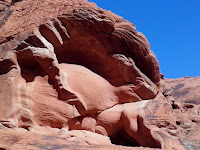 Science Fiction and Fantasy is about world building more than about anything else. I mean this in the sense that once the author has made the decision to move the setting outside the realm of an accepted consensus of “normal”, that world has to be described and presented.

This is also true of historical fiction or fiction that takes place outside of the audience’s realm of experience. Describing the other takes a different prose representation than describing the same. But, for this post, I’m limiting the discussion to worlds that must be built. I.e., they don’t exist in the normal frame of reference at all.

I’ll dispose of it quickly: it’s pretty much impossible.

What we end up doing, instead, is creating analogs of a built world and describe them in terms we would use to describe the world of our current understanding. For example, we can’t describe a world based on mantis shrimp’s perception of millions of color combinations or from the point of view of a cuttlefish’s distributed perception. What we can do in that case is either create an analog– a stand in for human perception– or describe something that a human being would find as odd and lean on the oddness to present the world.

We don’t just do it in fiction. We do it in the real world all the time. And then we borrow that ability to present a built world in fiction.

In our genre, the place is a character just like any other and must be as rigorously built and considered in the same way. And we do it by comparing it to our world. Unfortunately, we commonly do not use the amazing differences in geography and location available in our real for inspiration.

This was brought home to me in my recent Nevada trip.

For example, take this picture on the left. 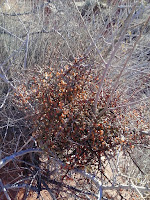 This is a small tree we found in Valley of Fire. We ended up finding it all over Nevada. It’s a gray shrub that has little life to show. It has green leaves at various parts of the plant but it largely looks dead.

Except, of course, that violent growth in the center of the picture with fruit. The branch structure is different. There are flowers. Fruiting bodies. It looks like an epiphyte parasite.

In point of fact that’s exactly what we thought it was until we examined it more closely and realized the red branches were growing out of the dead looking gray branches. Was it a disease? A fungus that hijacked the plant?

Our conclusion was that it was the reproductive component of the plant. Normal leaves were produced for photosynthesis. But when conditions were right, the plant went nuts and produced the material you see. In some cases it really looked like the plant had been consumed.

Another example is shown at left. This is also in the Valley of Fire. In this case, the geology is truly bizarre. 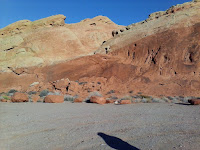 Normally, we think of things getting mixed together. Basalt mixed with sandstone. However, here the red, yellow and gray sections of the area are combined and kept separate. The colors aren’t as distinct as they should be but the demarcations are as sharp as if drawn.

Think of the mountains we see in Tolkein. Or in Kipling’s Kim. We have a preconception of how they should look and the authors leave us to that. However, this photograph shows how different that preconception can be from reality.

This one comes from Utah. 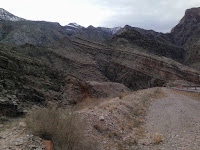 Again, this is a different sort of mountain than is normally pictured in the common perception. Fossils are found neatly popping out of strata like that. The fact of finding bones or shells just in the dirt have an influence on people’s thinking. We should capture that in our fiction.

Regional fiction often captures this sort of thing well. Southwest fiction, for example, presents the desert and water completely differently from fiction back east. And if you read many of the writers of the northwest, rain is a constant companion.

My point here is that the world building we do must necessarily reflect our own earth to some degree– how could it not? It’s our singular experience. That said, our own earth is wonderfully varied. So should be our fiction.