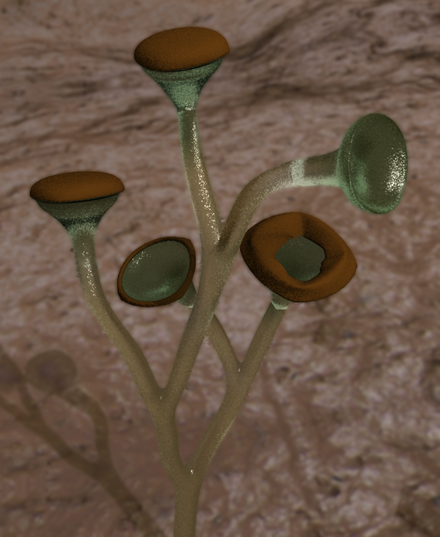 It’s hard to overestimate the importance of the plant invasion of the land. It’s the precursor to everything else.

I don’t just mean plants, either. The current model of vertebrates invading the land involves the changes in freshwater swamps being the source. What causes freshwater swamps? The plants surrounding the fresh water.

Let’s imagine for a moment the world prior to the land invasion.

We have oxidation geology– that started long before when the cyanobacteria pumped oxygen into the atmosphere. But there was no soil. No fixed nitrates. No decomposing strata. It was bare rock and gravel. Sure, there was slime at the edge of the estuary pools but not much else.

Even fresh water was different. One of the reasons freshwater lakes and swamps have life in them is the washed down organic material from the life on the land. Without washed down material there is nothing to eat. Nothing to feed the bottom of the web of life and without that bottom there’s nothing to build anything above it.

The green invasion had to happen first. It was the enabling technology for everything else that came later. The land plants fix carbon out of the air into organic material. That organic material falls and decomposes– how? It needs fungi and bacteria. Fungi are absolutely dependent other materials to consume. On the land that can’t work without the plants, right? Fungi are very old– they diverged about 1.5 billion years ago. But they couldn’t invade the land until plants were there for them. Again: plants are the enabling technology.

Before the vertebrates, the most successful animals invading the land were what became the insects. Again, without plants there was nothing there for them.

Back to the swamp, the vertebrates came out to invade the land and become amphibians. I suspect the very first were there chasing the insects. But they wouldn’t have been there at all unless the swamps were fertile first. Oh, yeah. That’s due to the plants.

One of the very earliest innovations in plants that enabled this colonization was the development of the alternation of generations. This is analogous to the sperm and egg vs. organism in animals. Animals produce gametes– eggs and sperm– that are haploid, i.e., have 1/2 the total number of genes in the full organism. They come together to create a diploid individual with both sets of genes that then goes on to grow into another gamete producing adult. There are a lot of ways this occurs but this is the mechanism boiled down to the roots. (Heh.)

The embryophyta, are the equivalent in plants. There is a sporophyte,  which is diploid, and a gametophyte, which is haploid. Almost every plant you see, from liverworts to sequoias, are embryophytes.

There’s been an enormous amount of discussion about haploidy vs diploidy. Why are diploids pretty much universally the norm in highly organized multicellular organisms? Diploid organisms have double the genetic material to work with and the sexual mechanisms are very efficient at presenting new combinations. Yet selection is far more efficient in acting on haploid organisms. Possibly the blending of these two approaches, diploid for organism and haploid for gametes, is the strength of the system.

The bryophytes were very early– non-vascular plants. We talked about them last time.

Clearly, there were several early innovations but the first one that really enables increase of scale is vascularization— the creation of a plant vascular system to move nutrients, oxygen and waste products around the plant system. The development of lignin was key for this and it gave structural rigidity to the plant cell walls and from that the structural strength of the xylem and phloem. This happened about 440-360 million years ago. This was a brand new innovation for plants and a significantly more recent than the similar system developed in animals.

All through the Devonian, these vascular plants proliferated. At some point, they developed an outside material to resist the loss of water. Thus we come to cellulose.

Land plants didn’t invent cellulose. Algae did that and how it happened is a long and ongoing discussion. (See here.) But land plants had it in their repertoire. It was a component of their cell wall. (See here.) At some point, that cell wall thickened on the outside. The thick outer wall, likely selected for by the ability to preserve water, had an inadvertent advantage: it gave structural rigidity to the plant. Plants could grow tall.

Now, plants use a lot of mechanisms to support themselves. Trees use a dead rigid inner core (called “wood”) they continually encapsulate. Bananas, for example, use a completely different mechanism. Cut a banana tree down and take it apart and you will find no wood. Just what looks like a tightly coiled leaf. In this case, the tree gets its rigidity by hydrostatic pressure– the same thing that makes a garden hose stiff when the water is blocked.

The lignophytes, those plants that could generate wood, arose very pretty quickly. The first land plants showed up in the Ordovician, about 485-443 mya. Vascular plants showed up in the Silurian period: 443-419 mya. Wood shows up in the Devonian: 418-358 mya. The time from the first known land plants to woody plants that could become trees is about 67 million years. Approximately the time that it took from the meteor drawing the curtain on the Cretaceous to now.

Not bad. Not bad at all.