We’ve returned home at last from Sasquan, the 2015 World Science Fiction Convention. It was a wonderful worldcon, though for much of the time the air in Spokane was borderline unbreathable due to wildfire smoke. Here are a few photos taken at various times, during bad air and good.

The first is a view out the convention center window, when the air was turbid with haze—and a sign that appeared on the doors leading out of the convention center that day. (Later in the evening I looked out our hotel room window over the sepia-colored skyline of the city, and saw a long train of black tanker cars winding through the center of the city. I thought I was witnessing the beginning of the eco-apocalypse.) 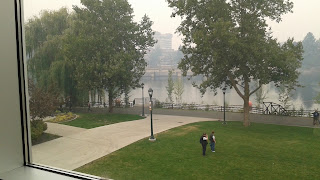 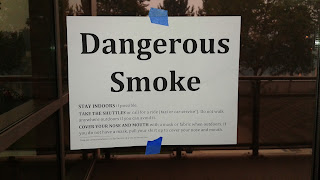 The next day the wind shifted, and the air was much nicer. That’s when I took these, on the riverside park bordering the convention center. 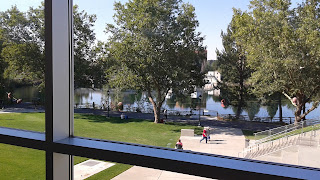 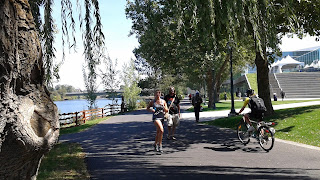 There are lots of quirky touches to the park. Sculptures along the river, molded directly into the railing. And the giant red Radio Flyer wagon, with the built-in slide for kids. Not to mention the trash-eating mechanical goat, here being fed a napkin by my wife Allysen. 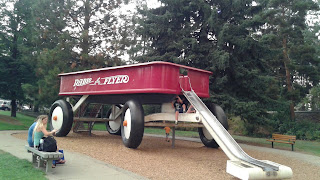 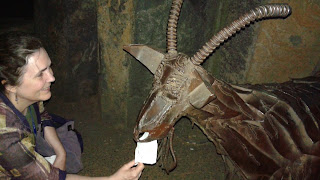 The programming included a wonderful Guest of Honor speech by David Gerrold, affirming his love of science fiction. (Short version: Reading SF changes the way you view life and the universe. It builds empathy, especially for those who are different from you. Empathy is the first step toward true sentience. Follow this road long enough, and you reach the beginning of wisdom.)

Scheduling unfortunately kept me from the speech by the other Guest of Honor, our own Vonda N. McIntyre; but I did get to chat with her and to share a couple of program items, including a panel on Book View Café as a model for cooperative publishing by groups of authors. My other panel, on the New Space Opera (sharing the stage with Charles Stross, Hugo-nominee Ann Leckie, and several others) played to a standing-room-only audience. I hope I said something intelligent—but as is my practice, I leave that to the audience to decide. Suffice it to say here that space opera (once a term that was used pejoratively) is now a part of our greater cultural landscape, including not just print fiction but TV and movies, and it’s grown up a lot in the last 60-70 years.

The much-covered Sad Puppies drama played itself out in the Hugo Awards ceremony. That’s a subject for another time.