Fishing With Horses:  There are only about 11 horse fishermen in the area of Oostduienkerke but the two men I have photographed are the only ones who actually drag for the shrimp for part of their income the rest just do it for tourism of the town.  I am not sure how much longer this old tradition will stay alive in this actual form but I am glad to have a chance to photograph these amazing draft horses and the men that work with them. The horses are so relaxed and I realized after going into the sea my self how much the waves have so much force and the sand shifts under you feet as you sink slowly into the wet sand. I think for these horses it is such a unnatural thing for them to do, but you can see that they have total trust that their riders will guide them and that is what true horsemanship really is, working with a trusted partner to get the required job done easily. Before mules were used for the job but because of the weight of the larger nets the Brabant draft horse is now used because of their tremendous strength and easy going attitudes. They could not have picked a better breed.

The Evolution of Snakes: “We infer that the most recent common ancestor of all snakes was a nocturnal, stealth-

hunting predator targeting relatively large prey, and most likely would have lived in forested ecosystems in the Southern Hemisphere,” said Dr Allison Hsiang of Yale University, lead author on the study.

Science Fiction Fodder: Ether-Based “DNA”: In the search for life beyond Earth, scientists have justifiably focused on water because all biology as we know it requires this fluid. A wild card, however, is whether alternative liquids can also suffice as life-enablers. For example, Saturn’s frigid moon Titan is awash in inky seas of the hydrocarbon methane.  Here on warm, watery Earth, the molecules DNA and RNA serve as the blueprints of life, containing creatures’ genetic instruction manuals. An immense family of proteins carries out these instructions. A new study proposes that molecules called ethers, not used in any genetic molecules on Earth, could fulfill the role of DNA and RNA on worlds with hydrocarbon oceans. These worlds must be a good deal toastier though than Titan, the study found, for plausibly life-like chemistry to take place.

northern hemisphere.  The “Christmas Lights,” as researchers called them, circled the globe and descended so close to the Martian equator that, if the lights had occurred on Earth, they would have been over places like Florida and Texas. “It really is amazing,” says Nick Schneider who leads MAVEN’s Imaging Ultraviolet Spectrograph (IUVS) instrument team at the University of Colorado.  “Auroras on Mars appear to be more wide ranging than we ever imagined.”

A White Dwarf Star: In the above shell of gas and dust, the planetary n 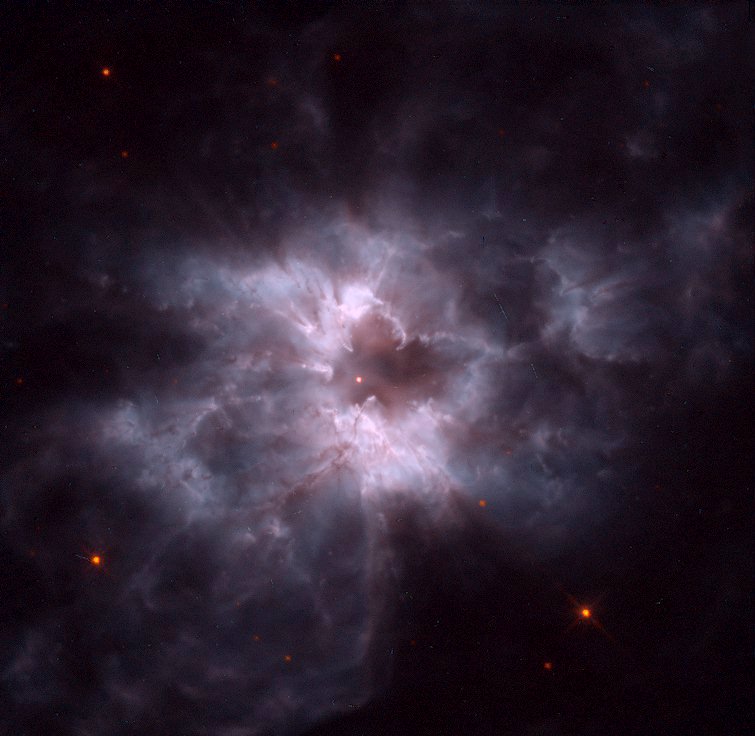 ebula designated NGC 2440, contains one of the hottest white dwarf stars known. The glowing stellar pearl can be seen as the bright dot near the image center. The portion of NGC 2440 shown spans about one light year. The center of our Sun will eventually become a white dwarf, but not for another five billion years.