↓
Home Menu ↓
Skip to primary content
Skip to secondary content
Home→Books and Reading→Consideration of Works Past: The Adventures of Huckleberry Finn 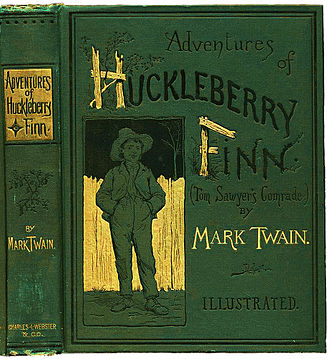 I have hesitated to visit Huckleberry Finn in this venue for a couple of reasons. For one, I’ve read the book regularly since I was a child so there’s no real sense of “revisiting” it. Second, so much has been written about it what could I possibly add?

But I suppose that’s never stopped me before.

I’m not going to discuss the plot directly here for a couple of reasons. If you haven’t read Huckleberry Finn, you should. The modern novel pretty much starts there. Shakespeare and Huckleberry Finn are alike in that both inform fiction since. Reading novels and stories without having some familiarity with both is like having muscles without bone. Whether a writer has read them or not, his work is informed by them. They are in the language we use and the structure of the material we enjoy.

Besides, the wikipedia article referenced above has a good Cliff’s notes outline.

Now, it’s true, I have a special relationship with this book. My father was born in Florida, Missouri, about seven miles from where Mark Twain was born. There’s a small museum in the Mark Twain National Forest where his birth house has been preserved. When Dad took me there he pointed out how the house he grew up in and the Mark Twain house differed. Dad’s was a little bigger and they had a coal stove instead of a wood one. Not much else.

Most of Huckleberry Finn is written in dialect. These were dialects that Dad either knew, as he’d grown up with them, or could figure out. So when he read it to me as a child, he could read all of the parts. Some of it I can do but never as well as he did.

The book is fun and very funny. It opens like this:

You don’t know about me, without you have read a book by the name of The Adventures of Tom Sawyer; but that ain’t no matter. That book was made by Mr. Mark Twain, and he told the truth, mainly. There was things which he stretched, but mainly he told the truth.

One of the best openings in the English language.

Huckleberry Finn is about a young boy named, appropriately, Huckleberry Finn. Huck is about fourteen living in a small Missouri town called Saint Petersburg around 1835-1845. At the time, Missouri was a slave state so Huck’s life and slavery are intertwined.

There’s an interesting way we talk about slavery in the modern day, as if it were something grafted on to life in the slave states. One of the things Huckleberry Finn makes completely clear is that the cloth of life in those times was completely composed of slavery’s threads. It is in the roots, branches and leaves of everyday living. It was not grafted onto life; it was their life.

Huck and slavery, and by extension moral choice and understanding, dance through the entire novel. Sometimes Huck dances with it face on. Sometimes he’s across the room looking the other way. But the dance is continuous.

Huck’s relationship between himself, society and morality (Twain makes it clear these three are  distinct) is somewhat tenuous at the beginning. He’s an outcast of sorts that’s been taken in to be “sivilized.” Civilization takes. Sort of. Ultimately, he is brought out of civilization and ends up on a raft in the Mississippi River with a runaway slave named Jim. From then on, Huck has to continuously wrestle with a moral point of view. But he’s never actually conscious of it.

This is where Twain shows his genius. Many works would have the character agonizing over what to do– and Huck does this. But never in a higher moral sense. Huck is attempting to determine the right course of action personally. What to do with his friend Jim who is also a runaway slave.  Jim is his closest and dearest friend. Both have risked their lives for the other. Jim is also a runaway slave. Another man’s property:

Here was this nigger, which I had as good as helped to run away, coming right out flat-footed and saying he would steal his children—children that belonged to a man I didn’t even know; a man that hadn’t ever done me no harm.

Huck is trying to be a good kid– he’s not yet a man in his own eyes. Jim is someone else’s property. He should tell the authorities so Jim can be returned to his rightful master. Everything in his upbringing has told him this is the right thing to do. The moral thing to do. He can’t do it and the fact that he can’t trips him up regularly.

Many would call Huckleberry Finn a coming of age story. I can understand the point but I wouldn’t for a few reasons. For one, Huck never admits to becoming an adult. Of course, he never admits to being a kid, either. He is changed by the end of the book and made decisions that will live with him and direct him throughout his life afterwards. But he doesn’t dwell on it. Life isn’t a lot better for him at the end of the book as it was in the beginning but he’s completed his journey without regrets.

More importantly, coming of age stories bring a lot of baggage with them these days. Modern coming of age stories seem to have blended with political revolution stories. I’m not such a huge fan of this trend. To me, moral revelation and political ideology are separate things. Though they affect one another they are not identical. Someone who votes against me is not automatically a monster.

And political revolution is not necessarily the best model for a coming of age story. Revolutions are complex things that people attempt for complicated reasons. In The Moon is a Harsh Mistress, the conspirators embark on a revolution not because of any moral code– they’re adults and have figured that out already. They’re doing it because in less than a decade they’re going to be starving to death.

If you look at revolutions that have happened there have been children and young adults involved. Les Misérables has a lot about the tragedy of losing young life in the pursuit of an ideal. We have young people sacrificing themselves for such things every day. But they are on the front lines. They are fodder for the revolution. The people that make a revolution stick– John Adams, George Washington, Ayatollah Khomeini, Fidel Castro– are not kids. They are tough men. For good or evil they’ve determined their moral course and created their political ideology. They’ve made their choices and are now acting on them.

That’s a huge burden to place on a kid just figuring out what’s right and what’s wrong.

One of the important threads in Huckleberry Finn is that morality is personal. Jim is not a slave in the abstract– Huck’s met lots of slaves in his life. None of them moved him like Jim. But they are bound by a deep love for one another. (And by that word I do not mean sexual romance.) It is a deeply personal decision Huck has to make and because it is personal we feel it, see it and live it with him every step of the way.

By the end of the book Huck has made no great decision regarding slavery in general. He has not become an abolitionist in the political sense of the word. He’s not going to go north and fight slavery or start helping on the underground railroad. He might some day though he never says so. As I said, his course has been changed and where he will end up is anyone’s guess.

I suppose I could have said the same when it was first read to me.