As the end of the year approaches, my stack of to-be-reviewed books grows ever taller. I realized to my horror that I am rapidly approaching the point of not being able to remember what I liked or disliked about each story. So here are reviews of varying lengths for your amusement – and hopefully a few will pique your interest enough to check out the books themselves.

The Soul Mirror by Carol Berg (Roc, 2011). I’m an unabashed Carol Berg fan. I love her world-building, her characters, and the way she puts a story together. This series is new to me, and I inadvertently started with the second “Collegia Magica” book – and had no difficulty at all, so seamlessly did Berg weave in all the backstory I needed. Sometimes, I find a biiiiig book daunting, but in Carol Berg’s case, it’s fantastic because I want to spend a long time in her world. This is Renaissance/Gothic/romance/fantasy with echoes of Jane Eyre and Hamlet (a young woman with a great deal of common sense and without morbid self-doubt, with lots of skeletons in the family closet, but determined to solve her sister’s murder). Oh, and ghosts. Complex like dark chocolate. Addictive.

The Specific Gravity of Grief, by Jay Lake (Fairwood, 2010). Written when Jay was still

struggling with metastatic colon cancer, this fictionalized version follows another cancer patient as his life disintegrates. “Long ago, when he was fat, happy and colorful, the ragged man used to joke that perhaps it was his purpose in life to serve as an example to others. While he still believes that might be true, these days he is more inclined to think that his purpose in life is to absorb the pain of others. A modern day sin-eater, with cancer the bread of error.” Wise, passionate, generous – just like Jay. Cancer sucks. 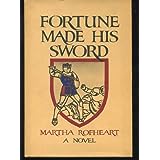 Fortune Made His Sword, by Martha Rofheart. A well-done, absorbing fictional account of the rise of Henry V. The cool thing is that the author was a theatrical actress, well versed in Shakespeare’s “Chronicle” plays. I can imagine her going, “There’s a lot more to say about this king – I’ll write a novel!” What could have been drek turned out quite lively, filled with colorful settings and interesting characters. Check it out if you enjoy historical fiction.

The Silvered, by Tanya Huff. Huff is one of my favorite writers, one I will gleefully follow

across genre lines. Sexy vampire mysteries, check. Kick ass women military science fiction, check. Urban fantasy, with or without cats, check. So when I saw The Silvered had been released – steampunk werewolves! – my reader’s little heart went all pitter-pat. I will now proceed to gush – nobody does it better: world-building, a believable and intricately executed system of magic, action, romance, characters I care passionately about, silliness and heart-wrenching sadness. Tanya Huff was Guest of Honor at Convolution 2014, and I attended her small group discussion. I asked if there would be any more books set in this world and everyone laughed. I’d come in late and had not realized that just about everyone there had the same question. The answer, alas, is no. This is, in Huff’s words, a “one-off.” So treasure every page!

Rashi’s Daughters: Joheved, by Maggie Anton (Plume 2005). This is straight historical fiction, subtitled A Novel of Love and The Talmud in Medieval France. I found out about the series (Joheved has two younger daughters, and there’s another series about Rav Hisda’s daughters, too) from an old school friend. Rashi (Salomon ben Isaac or Shlomo Yitzchaki –1040-1105) was one of the greatest Talmudic scholars of all time. His common name is an acronym based on RAbbi SHlomo Itzhaki. He lived mostly in Troyes, France, during a time of relative calm for Jews, and wrote and taught extensively. His only children were three remarkable daughters, all of whom married Talmudic scholars and undoubtedly were learned as well. Anton has taken an amalgam of documented history, legend, and her own imagination to create a novelization of the life of Rashi’s oldest daughter. She portrays a world that parallels the medieval Christian society that is so much better known to us, and does so with remarkably vivid detail. While there are no fantastical elements as such, any lover of historical fiction, historical genre fiction, will discover many delights here. Among my favorites were the portrayal of growing grapes and turning them into wine, a community event.

Maplecroft, by Cherie Priest (Roc, 2014). Lesbian Lizzie Borden and her axe take on horrors out of Lovecraft! What’s not to

love, especially in the capable hands of Cherie Priest? I confess, I liked her earlier work better than her steampunk novels, but it seems to me that her skill at storytelling increases with each change of genre. I suppose Maplecroft could be considered steampunk, given the time (1893-4), but the focus is not on gadgetry. No tentacles, but lots of weird transformations and hanging on to sanity with the flimsiest threads. I would expect, given the success of her Boneshaker, that this book would be extensively reviewed, and I have not much to add beyond that the concept got me to buy the book, and the book itself grabbed me from the first page and wouldn’t let go. 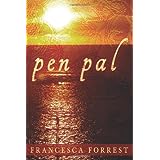 Pen Pal, by Francesca Forrest (CreateSpace, 2013). How does an excellent self-published book finds its way to readers? In this case, I found Pen Pal through a direct contact with the author (I’d edited her short story for one of my anthologies) and a strong recommendation from a fellow author whose opinion I trust. Otherwise, I almost never buy a self-published book, but I was delighted with this one. As the title suggests, the book is comprised of letters from one friend to another. I’m old enough to remember having pen pals, letter-friends I never met in person, some of them on different continents. I’d feel a particular thrill at the sight of an envelope with foreign postmark and colorful stamps. I never met any of these pen pals, and with time, the correspondences dwindled. Forrest has taken this phenomenon – a friendship through letters between two people of wildly diverse cultures – and shaped it as good fiction. There’s a beginning, when teenaged Em, who lives in a floating town called Mermaid’s Hands and may or may not be of selkie folk, puts a message in a bottle and it’s picked by by Kaya, a student-turned-unwitting-activist who is imprisoned over a volcanic caldera called Ruby Lake. Through a series of fortuitous connections and a little magic (or trained birds, as the case may be), the two manage to answer one other, to exchange stories, and to try to help one another. The story development is handled with great skill, the voices are clear and distinct, and the entire reading experience was a pleasure cover to cover. I love stories that have deeper meaning but let me discover it, and this is one. Themes of family, self-reliance, growing up, political repression, the difficulties of being “other” in a conformist society, are all there to be explored or let lie, as the reader wishes. I particularly suggest this book for families with teens as a way of opening up discussions of important topics. And who knows, you might end up with pen pal of your own!

The Warded Man by Peter V. Brett (Del Rey, 2010) This came to me through the freebie bag at the Nebula Award Weekend.

The author’s name rang a bell, but nothing more specific. To begin with, I’m underwhelmed by covers featuring a man in a hooded cloak – so overused as to be a cliché for me. But I believe in at least giving a free book a try. This one is a debut novel with an interesting premise: in this fantasy world, every evening, demons arise from the “Core,” meaning underground – wood demons, fire demons, wind demons, the like. Their only motivation seems to be killing (and eating) people (and their animals). Various youthful characters join together to fight them and have adventures. It’s fairly well done, and the depiction of the human settlements struggling against ever increasing fatalities is especially poignant. The action moved right along and never lost my interest. My judgment is that this opening to a series will hit the right notes with certain readers. While I kept turning the pages, something in it was a little off for me. Maybe it was the relentless hatred of the demons and how easy it is to justify violence when your opponent is not human and therefore impossible to have empathy for – they deserve no compassion, as they are completely evil. I prefer more complex adversaries and explorations of how we deal with “the other,” whether it’s Brett’s demons, Peter Jackson’s depiction of Tolkien’s orcs, or what I see in the popular news every day. One small thing that niggled at me was the way Brett changed the spelling of common names; my favorites were Lakton for Laketown (another echo of Tolkien), or Rojer instead of Roger, the kind of pretentiousness found in amateurish writing. Yes, names change over time, but they change organically as part of the evolution of the language. This might not bother another reader, and as I said, I’m sure Brett’s work will find an enthusiastic audience, eager for the next installment of the story.