And I am back.

It’s been a rough month. I tore my biceps tendon in judo back in October and it had to be reattached. Which meant it had to be in a cast for a month. As keeping it in the thumbs up position is sort of counter productive, I’ve been working on moving it back to typing position for the last few weeks.

The biceps brachii isn’t just the big honking muscles that bulge out during a biceps curl. That is, the biceps gets bigger when you curl but there are a lot of other muscles that lift—notably the brachialis muscle. In fact, one can tear the biceps pretty bad and regain most or all of the strength of the lift.

What the biceps really does is lift and rotation. If you bear down to turn a screw you’re using your biceps. It is intended to turn the hand to the outside and flex the elbow. This is why the biceps curl has the hand turned towards your face: that’s where the biceps is fully contracted. If you curl with your hand pointing the other way, like some 19th century boxer, the biceps can’t fully contract.

So, in the interested of making lemonade, I’m going to talk about the evolution of the biceps most important friend, the human hand. After all, if the main intention of the biceps is to be able to rotate the arm, what’s the point without the hand?

First, let’s look at a hand.

Four fingers and a thumb. Hm. Well, mice have five fingers. How far back does that go?

Let me present Protungulatum donnae, a rat like ancestor of placental mammals from the very end of the Cretaceous. It had five fingers.

But this isn’t so surprising since if you look at the front claws of an iguana you see… five fingers. If you look at a salamander… five fingers. Amphibians, reptiles, dinosaurs, birds and mammals all belong to the superclass Tetrapoda. One of the defining characteristics of tetrapods is the five distinct carpals. Some may be fused as in crows and horses but many groups from rats to iguanas to apes have the same five carpals. Hold up your hand and you see the same bones as would a Komodo dragon lizard. 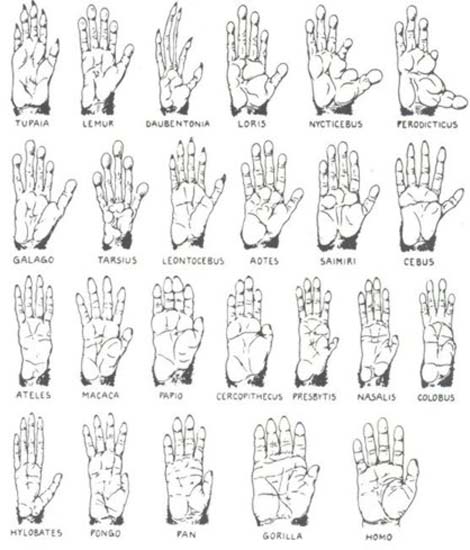 (Both pictures from here.)

What makes a hand? Hands have thumbs, right? Where did the thumb come from?

It turns out that thumbs appeared in primates about 70 mya. There’s some evidence of the beginnings of a thumb in dinosaurs but since mammals and dinosaurs split off many millions of years ago it’s unlikely there’s any connection.

Let’s look at the hand again. Thumb off to one side. All fingers in the same plane with the thumb underneath.

If you look at the picture of primate hands you can see the movement of the thumb. In lemurs it’s nearly in the same plane as the other fingers. But by the time you look at the great apes the thumb has definitely migrated to the front of the hand—not as much as in the human hand but there are clear resemblances.

Now if you look at the hand of the great apes: orangutan, chimp and bonobo, gorilla and human, there’s a definite difference between them. First, there’s a definite reduction in the length of the fingers of the human hands. Gorillas and baboons have an almost human looking fingerset where the others have a different palm to finger arrangement. The thumb, again, is strongly differentiated between the humans and the other apes. It’s more divided away from the rest of the hand and further rotated towards the front—the “opposable thumb” of people comes from that rotation.

Remember, though, the fundamental bone and muscle architecture underneath is almost the same. There’s no new muscles or bones. A radius and ulna in the human and the other great apes are very similar. They even have a biceps for rotation. It’s very similar to the way I spoke about the shoulder a while back. Chimp shoulders and human shoulders are very similar but humans have eroded just a little bit so we can throw things. Chimps can’t do that.

The evolution of the human hand from the common ancestor it had with the other great apes has been a continuing area of discussion. For one thing, tool use has been presented as a strong selector—which it no doubt is. Chimps and monkeys and crows can use tools such as twigs and rocks but only humans have managed the dexterity to make napped stone. And I don’t think it’s just intelligence. Our ancient ancestors weren’t much smarter than chimps but they made many more tools than they ever had. I suspect it wasn’t because they were so much smarter. It was because of their hands.

Evolution only works on what you have. Consequently, humans must initially had a slight advantage for tool use over other groups of apes. Just enough that the slight advantage became an object of selection towards the modern hand. After all, we used fire a million years ago.

Tool use is one important selection mechanism. But are there more?

There’s been a school of thought that this throwing mechanism (See Richard Young’s article.) is one of the primary mechanisms of evolutionary pressure. Analysis of the hand suggests two fundamental human grips: the precision grip and the power grip. One is for delicate operations and the other is for the application of force. The human hand is capable of both. The chimp is not particularly capable of either by comparison. We can nap flint and pound with a club using the same appendage. This extends, though, into throwing things like spears or rocks—something we’re also peculiarly adapted to in our shoulders.

William Calvin pursues this even further in his “throwing Madonna” idea. The interesting thing here is that if we throw a spear (or a fast ball) the signal to turn the hand just so to release the object has to be on its way to the hand before the shoulder throw is complete. We can’t reach the right point and then send the message—neurons just aren’t that fast. So the system has to plan it and set it up in place. And we do it really well. It is his contention that the same forces that acted on the hand acted on the brain.

Okay. We can apply power with the power grip. We can build things with the precision grip. And we get a brain along for the ride. Why can we make a fist?

Look at that fist. The fingers are at a right angle, exposing the knuckle. There’s some serious bone on that knuckle—not at the level of a gorilla knuckle walker but it’s substantial. Why would we evolve something like that?

To punch each other.

There are a lot of hand configurations that give us a precision and power grip but only one that gives us a fist. That seems kind of a rough start to things. Surely there would be other evidence if that were the case.

There’s this thing called the human face. It’s an odd thing. Flat in the front. Nose is recessed except for a soft bit that protrudes. High cheekbones flush around the eyes. Turns out this makes the face tolerate a punch much better than that old ape face. (See here.) And it’s somewhat sex specific: men’s faces are better designed to take a hit than women’s.

So: hands evolved for tool use, throwing and brawling and the brain came along with it.

One wonders if the hand evolved to throw a punch maybe the brain evolved so we didn’t have to.

Additional: Good slide show on the evolution of the human hand here.