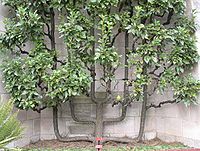 It’s harvest season on our little microfarm. Nanofarm? Postage Stamp Farm? That might be a good name for the place.

We have two gardens. The main one south of the house and the east garden where the turtles live. Yes, we have livestock. We grow turtles. And chickens, but the chickens give us less trouble. There’s a long and sordid history on how we got into raising turtles but it boils down to not wanting the pet trade to decimate animals we like. Turns out from capture to pet store takes a toll on wild animals. So we got into breeding them to compete with the captors. But that’s a long story for another post.

Besides, they love to eat slugs. The turtle garden is always slug free.

South of the turtle garden are a grape arbor and two fruit tree espaliers. Moving west we hit the plum espalier and the persimmon tree to reach the main garden. South of the main garden is a small grove of fruit trees planted this year. Moving further west to the south forty is another couple of grape arbors and the leek, scallion, garlic and green onion beds. Moving north from there, next to the house is the west espalier– a Belgian fence style. Continuing north, behind the house, is the greenhouse.

Everything was hammered this year by caterpillars. We got one– count ’em, one– apple on the Granny Smith. We didn’t even get many blossoms. Ditto the plums. We did well on peaches and pears– though we had to harvest the pears early. A local nest of carpenter ants learned a new trick. The found a pear, ate a hole and proceeded to mine the pear through the hole leaving a husk. I have to find the nest. I have blood in my eye and no carpenter ant will be left unscathed.

We had a number of blossoms on the apricot and nectarines but no fruit set on the apricots and we got little on the nectarines– four, to be exact. I think the same caterpillar problem.

We  have grape vines that are good producers: the marechal fochs and the concord. This spring I cut back both fairly hard and they seemed to thrive on it. Looks like we’re going to get a good harvest. The marechal looks like it should be harvested in a week or so and the concord is just starting to purple.

For the last ten years or so I’ve had an impossible project I’ve been working on: creating a drinkable concord wine. It must be dry with a hint of concord but no trace of the evil solvent taste concord is known for. I’ve been having some success. I’m hoping this will be a good year.

The marechal looks to be a good harvest as well. In the last few years I’ve been in state of war with the yellow jackets. This wasn’t helped by the size of the marechal vine. It had become so big that different sections matured at different times– hence the major cut back.

We didn’t have a good year for plums and apples as I said so I won’t talk about the espaliers much. The persimmon looks to be a great harvest. The tree is laden with fruit. Of course, it’s over a month away and anything can happen.

We moved some trees from the Belgian fence: two filberts and a mulberry. Both were just too vigorous. This is their first year in the new spots so it’s a wait for next year scenario. But all the plants seemed to recover well in their new locations. We got a few mulberries but no sign of filberts.

This has been an terrible year for deer. For the first time the deer have decided the main garden, and the adjacent new fruit trees, are one long buffet table. We put up an electric fence a couple of weeks ago and this has discouraged them from the garden. The new trees are hurting. I’ll have to put up a cage of some sort to protect them.

We had a good peach harvest but I got lazy and didn’t thin them enough so some of the branches of the tree were just too heavy and suffered. We took the result and made peach fruit salad with melons from the garden and froze the remainder. A couple of years ago I made a nice peach wine. We’ll see if I do that this year.

The greenhouse did well. We’ve had two large bunches of bananas that we’re drying. The strawberry guavas are going to be ready in a couple of weeks. We’ve started trying aquaponics which has more difficulties than we perceived. Right now, the we’re using goldfish for the fish part and growing vegetables. We’ve also attempted rice. Average rice yield in Missouri for the last five years was 6,676 pound/acre. That gives a couple of pounds a year for two crops. So we’ll see.

Wendy decided that clawfoot bathtubs are the best alternative for our hydroponic attempts. This gives our greenhouse an… eclectic look.

Which leaves the gardens.

We got a good crop of cantaloupes and honeydew but not so great on actual watermelons. This year we tried putting down the black plastic and that seemed to help.

Wendy and I have been gardening at the house since 1993 and in Watertown for several years before that. Wendy’s been gardening in New England since she was a child. So we have a good idea of what summer’s are supposed to bring. Typically, it has been cool to the possibility of freezing up to Memorial Day. Warming to hot by the end of June. Hot through July and early August. Latter August if variable but by Labor Day things start to cool off. Normally, there’s no frost in September but there is some possibility of frost by Halloween. That was the norm until about seven or eight years ago.

The last couple of years we have seen the HOGs, wet stretches of June, hot Julys and, this year, a cool August. Lots of chaos. That’s exactly what the global warming models say: more chaotic behavior. So Wendy and I are adapting like a microcosm of the rest of the world.

So, now we’re looking at different varieties that can cope. Some of the heirlooms we’ve liked in the past can’t cope with the variability over the summer. We’re trying some new things. This year we’re trying yacon, a Peruvian tuber.

We all have to learn to be adaptable.