As Tajji, the retired seeing eye dog that we are rehabilitating for extreme reactivity to other dogs, progresses through her curriculum, one thing stands out over and over again: every dog is different. It’s one of those utterly banal, self-evident statements, and yet how many times do we, even knowledgeable dog owners, take a one-size-fits-all approach to their behavior?

Each of the four dogs in the class (Reactive Rover, taught by Sandi Pensinger of Living With Dogs) is reactive in some way. To other dogs, to strange people, to sudden noises. Yet even dogs who are triggered by the same type of stimulus express their distress in different ways. For example, both Tajji and George are reactive to other dogs. Tajji has greatest difficulties with small dogs, while George, a solidly-built chocolate Labrador owned by an elderly woman, reacts most strongly to other large dogs. We have no history on Tajji’s problems, except for her fractured tooth, whereas George’s problems stem from a specific constellation of events – the deaths of his male owner and his female canine companion plus an attack by another large dog. Tajji has extremely good eyesight and could easily spot a small dog on the other end of the field (275 feet) while George did not appear to notice the small dog until he had advanced quite a bit closer than that. 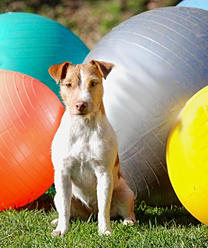 Today’s exercise, as you can tell, involved exposure to a “decoy” – last week it was a stuffed dog, this week a well-mannered small dog. (Sandi’s dog Pilot, pictured here, was one of the decoys.) The decoy would be led out from behind a blind (a waist-high portable screen) at the far end of the field. If the student dog did not notice, its handler would take a step at a time toward the decoy, waiting after each step.

For Tajji, just being out on the field with strange people and all the smells of other dogs was arousing. She gave lots of signals of being under stress (including shedding, something we noticed as we petted her in long, soothing strokes) in just the walk from the car to the canopied area where the other human students were seated. This was after we had arrived early to give Tajji a chance to sniff around, stretch her legs, and generally get happy in the field. We’d signed up for a one-dog-only play session Monday morning and she had a wonderful time practicing her relaxation lessons and then chasing a ball.

So the first thing we needed to help Tajji with today – before she could focus on the decoy work – was to get her calmed down so she could think instead of go flying off the handle. Giving her time to look around (German Shepherd Dogs being very big on knowing what everyone’s doing) settle helped, as did more relaxation exercises. These included asking her to make eye contact, eye contact with distractions (such as holding the hand with the treat straight out to the side), “puppy zen” (sitting very still while a treat is slowly lowered from above and then popped into her mouth “Yes!”), and hand targeting. The more we drill these exercises, the easier it will be for her to do them when she’s under stress. Dogs flourish under structure, and having a simple task she knows very well gives her that structure. Also, these all involve paying attention to her person and not that scary terrier at the other end of the field.

We wanted to get in two sessions for each dog, so we kept them brief, with as many repetitions as we could squeeze in. Part of Tajji’s first turn was getting her calmer. Then we brought out the decoy. All we focused on was “see a dog, get a cookie” – classic Pavlovian conditioning. Then we added “get a cookie + lots of praise + getting out of Dodge (especially when she huffed, a sure sign she was getting overwhelmed)” “Getting out of Dodge” meant a quick retreat, her person making happy talk all the way, eventually to the gap between two trailers so she could not even see the decoy dog.

George wasn’t nearly as reactive, so not only did he come closer to the decoy, but he was able to disengage (by looking away, sniffing the ground, etc.) by himself. That behavior resulted in a happy retreat and also a visit to the other people, who gave him many pettings. Although motivated by food like every other Lab, George was also a total love-sponge. And the attention helped to diffuse the tension from the exercise.

One of the other dogs, Sparky, reacted to people, particularly men, but also sudden noises, like the flapping of the shade canopy. His primary behavior was dropping into a crouch. So some of the things he got to do were watch people (instead of that scary terrier) walk back and forth, and also play games where strange people threw tasty treats on the ground and then walked away. Fancy that! It wasn’t long before he was moving toward the strange food-throwing people instead of slinking away.

Georgia (isn’t it odd to have a George and a Georgia in the same class) did not have a one single thing she reacts to, although part of the problem in discerning her issues was that her two people did not observe her carefully. They were still at the beginning stages of learning not only how to “read dog” but how to time their own responses. Being able to “mark” desirable behaviors (with a clicker of Yes!) precisely is the key to communicating what we want our dogs to do. This is surprisingly challenging because in so much else of life, we give feedback a moment (or an hour, or a semester) after the behavior. But dogs live moment-to-moment, and if we’re going to tell them I love what you did, we have to do so at the instant they do that behavior. Or they think they’re being rewarded for the behavior that happened the next moment – that’s when the click sounded, so it must be right.

One of Georgia’s differences from Tajji is that Tajji is intensely focused on her people, even when she’s struggling with her environment. She can be quite “ramped up” and still respond to her name or a relaxation command (“Touch!” Yes!) But Georgia’s a pit bull mix and pit bulls (as I just learned) tend to face the world and to stare at it. Very early in the class, we learned that staring is extremely rude in dog language, rapidly escalating to hostility. So Georgia’s owners have the added challenge of getting her to focus on them, not the world. The ideal, Sandi explained, is for whenever anything alarming appears, the dog looks to mom or dad. Not only does that give us better control over the situation and a chance to help our dog relax, it breaks our dog’s stare at whatever it is, helping to defuse a potential conflict.

For Tajji’s second session, we brought out her mat (“Place!” Yes!) and practiced rewarding her on it. Then out came the decoy. This time, instead of pairing a reward with a stimulus, we substituted the functional reward of removing her (to her mat), petting and praising her, and then giving her a treat. We tried having one person (Dave) handle and pet her, and another (me) treat her. By the end of her second session, she was able to look at the Terrifying Terrier and then happily come away. Progress!