Our friend Mitch Wagner recently adopted a female shepherd/basenji/terrier mix that shares some of Tajji’s “issues. He writes that Minnie “lunges and goes nuts when she approaches another dog when we’re walking.” One of the things we’ve learned from our trainer, Sandi Pensinger, is that this kind of excitement is not fun for dogs. Whatever their specific history, they act this way because they’re overwhelmed. They no longer can calm themselves or communicate friendly intentions to the other dog. One way to look at this is the dog attempting a “pre-emptive strike” because bad things have happened around other dogs in the past. Dogs on leashes are particularly vulnerable to feeling threatened, because their freedom to act in their own defense (or escape) is impaired. Dogs that are tied up are particularly dangerous.

Another way of thinking about this behavior is in terms of self-confidence and trust. A confident dog with good social skills with other dogs is capable of lowering the tension not only in herself but in the other dog as well. Contrary to the “alpha dog/dominance” model, dogs are highly cooperative, social animals. They communicate their feelings and intentions to one another all the time, and many of these signals are calming signals. In earlier blogs, I’ve discussed how Tajji learned to communicate her peaceful intentions to the cats once she’d found a signal they both understood – the “look-away.” Turid Rugaas’s book On Talking Terms With Dogs: Calming Signals beautifully illustrates this. Here is a slide show from her book, illustrating the “look-away,” play bows, lip licking, and lying down, all powerful calming signals, and here is a more complete explanation.

Dogs who are poorly socialized with other dogs or who have had traumatic experiences can be easily overwhelmed (“flooded” with negative stimuli), especially in situations where the other dog is approaching head-on. A direct approach is threatening, as is fixed eye contact. Our dogs need our help in reducing the degree of threat and resulting arousal. The dogs in Rugaas’s slide show aren’t “friendly” in the human sense, but they have excellent social skills and confidence in themselves.

How do we help a dog re-build her self-confidence? First, by not placing her in situations beyond her ability to cope, and if we find ourselves in such a situation (an off-leash dog appears around a corner, running straight at our dog), we take charge, remove our dog from the threat, and reward our dog for coming away with us – teaching the dog that she can rely on us to protect her. If our dog isn’t pushed completely over her threshold, we can reward her for calming signals. Even the slightest look-away or sniff gets praise. Yes! We can also find playmates that are confident, well-socialized dogs so that our dogs can re-learn their communication skills. The limitation is that dogs are highly specific, so learning to play (or at least co-exist peacefully) with one dog will not generalize to other dogs. 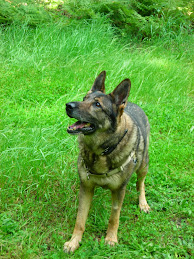 We have recently had some moment of success with Tajji’s reactivity to pedestrians. At first, we had to remove her from the stressful situation (seeing a person on foot several blocks away). At the same time, we rewarded her with click/treat for coming away. Since her tooth extraction, she has been significantly less reactive, so we’ve gone on to the next step – walk away, increasing the distance, then circling to take another look, while click/treat what a good dog! Gradually Tajji began to trust us to heed her signals of distress. She also learned that calm behavior generated many tasty treats and praise.

In the last few days, she’s been able to do a walk-by on opposite sides of a two-lane street with a pedestrian. Several times, her reaction to a distant threat has been to check in with Dave or me. Yes! Good job! Throwing the treat on the ground — “Find it!” — not only delivers the treat but encourages her to sniff, which calms her and sends a calming signal to the (human being) scary thing down the street.

For me, a key to working with a fearful, unconfident dog is finding what gives them joy. Some dogs are entirely focused on food, and we’d want to find the most tasty, endorphin-producing treats for them. Other dogs love play – chasing balls, catching Frisbees, romping in the surf. Tajji is moderately food-motivated, but not when she’s too stressed. In fact, not accepting a treat is a good signal (for us monkeys) that she’s in over her head.

Tajji went through a period of time when she absolutely “lit up” when we threw a ball for her. She hasn’t quite gotten the idea to bring it all the way back and hold it until we ask her to drop it, but close enough. About a week ago, while playing ball in The Meadow, I saw her running full-speed after what looked like a cat. The prey animal turned out to be a tiny fawn that had been resting in the bracken ferns that border the meadow. (We’ve since discovered evidence of deer – which infest our neighborhood and ravage gardens – lying down there.) It dashed this way and that, undoubtedly terrified out of its mind. Tajji’s prey drive was fully engaged, and it was difficult to break her “lock” on the fawn, but I managed to interrupt her charge. (The fawn, which she had knocked down several times but not otherwise injured, sprinted away.) Since then, Tajji has been fascinated by deer trails. After a lifetime of not being permitted to sniff while in harness, she is making up for lost time. We are contemplating enrolling her in a “nose work” class with Sandi. Fortunately, we have access not only The Meadow, but a number of privately-owned trails where she won’t encounter other dogs.