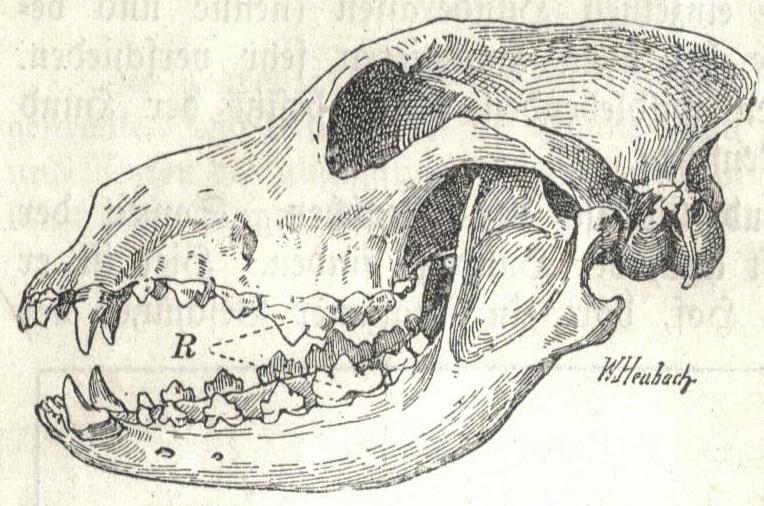 Dogs, like many other carnivores, have specialized teeth for shearing. These teeth come in pairs – an upper and a lower – and are modified fourth premolars (upper) and first molar (lower). The sharp cusps create a scissors-like action, obviously important for chopping up chunks of flesh into pieces that can be swallowed. (Sabertooth cats had carnassial teeth, too – they did not use their elongated canines for chewing!) Apparently, these teeth are particularly susceptible to fracturing and abscesses in domestic dogs. This is what happened to Tajji. She isn’t a “strong chewer,” like our old German Shepherd Dog, but all dogs can exert tremendous force when they bite down, due to the length of their jaws.

About three years ago, as near as we can tell from her vet records, Tajji suffered a slab fracture of one of her upper carnassials teeth. The portion of the tooth on the lip (as opposed to tongue) side was broken but not detached. This image shows a dog with almost the same problem, a slab fracture with a movable chip. Tajji’s fractured tooth was covered with tartar. We had no way of knowing how much discomfort she was in, and how chronic pain might have exacerbated her reactivity. It was clear to both of us that we needed to get to the tooth taken care of. The vet offered to try to save the main portion of the tooth, warning us that the exposed surface would need careful brushing to prevent decay and new buildup of tartar. Rather than risk a problem that required a second dental surgery when Tajji would be even older, we decided to go ahead with extracting this one.

Because Tajji’s reactivity is heightened at the vet’s office, either because of the presence (and smells and sounds!) of so many other animals, or because she associates those smells and sounds with unpleasant things happening to her, we wanted to give her a little extra help, pre-operatively. At our request, the vet prescribed two anti-anxiety medications (acepromazine and diazepam), which we gave an hour before her appointment. She had a little trouble getting into the car, but we have never seen her so calm in the vet’s office. We went with her back to the holding area, where she went willingly into the large crate and lay down. Unlike our old dog, who would yodel in distress when we left him at the vet, Tajji seemed quite mellow. We’re hoping that the relatively easy dropoff will minimize any association between the office and Terrible Things Happening To Dogs.

Our vet called a few hours later, saying that the surgery had gone well, although Tajji was recovering slowly from the anesthetic. Once the outer, fractured part of the tooth had been removed, the main portion was black and foul-smelling, so it would have had to be extracted in any event.

We picked Tajji up later that day. She was on her feet but still woozy, with a little blood in her drool and goopy, old-dog-looking eyes (I think because the muscles around her eyes weren’t back up to speed). She spent the rest of the day checked out or being cuddled. She is a dog who loves lots of physical contact, so Dave and I got down on the floor and wrapped our bodies around hers. She’d sigh and relax even further. The next morning, she was interested in breakfast (soft food only!) but not at all her usual energetic self. She’ll be on pain meds and antibiotics for another week or so. For the first dose, we used the usual technique for getting pills into dogs, then decided she’d had her mouth messed with enough for now. So we got some “dog putty” – chicken flavored putty that you wrap around pills – and she happily ate them. Given her age, a slow recovery is nothing to worry about, so long as we see some improvement every day. I suppose that’s one of the lessons about getting older, for us as well as for our animals. Patience and perspective! And looking forward to a future without chronic dental pain.