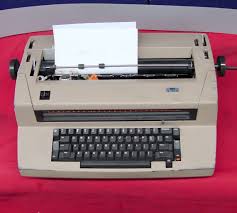 When I sold my first book, the on-pub payment went to the purchase of a state-of-the-art machine: an IBM Correcting Selectric III, brand new, light brown.  I named it Toast.  (I am not the sort of person who commonly names her stuff.  Or rather, I might name my stuff, but then I forget that I’ve done so, and the name withers and dies.)  And I wrote four more books on it.  And did various other things. When I joined the computer revolution in the mid-80s, I kept Toast around for filling out triplicate forms and addressing envelopes (yes, I know you can do that on a word processor, but it took more energy than just using the typer).  Eventually, it went to live with my father, who kept it for another six or seven years before he moved and gave it away.  It still worked beautifully.  When someone says “That guy is a machine,” in tones of admiration, I think of Toast.  The Selectric weighed the Earth, and what’s worse, I used to sit cross-legged on my bed with Toast sitting on my lap; a Selectric makes a very very bad laptop.

The right tool can be a lovesome thing.  Seven (eight?) years ago my husband gave me a Kitchen Aid stand mixer.  It is a handsome, handsome object, the perfect marriage of strength and agility. It makes all sorts of cooking (particularly, but not only cakes) so much quicker.  My Dad and I used to go to restaurant supply stores to faunch over the industrial strength high end pots and pans and kitchen jeep.  A Kitchen Aid mixer is a wonderful thing, but there are many other less showy tools: I just got a new box grater made of stainless steel (no more of that grubby aluminum that turns gray when you wash it) with a catch-what-you’ve-grated container in the bottom.  Bliss.  I recently got a new apple corer too, one that has a handle that comes off so that you can pop the core out.  These are all things that make work I regard as essentially creative easier and more fun.

In the last few years I’ve worked for a children’s publisher that specializes in activity and craft books, and thus I’ve been doing a good deal of stuff like beading, felting, making stuff with polymer clay, crocheting rubber bands, etc.  Some of it is exploratory crafting, some of it is making up samples for focus groups, or testing directions.  And when I find a craft I enjoy, I tend to go spend my own money to get tools.  Like the pasta machine (okay, a cheap pasta machine; I was not going to invest in a Marcato) for working with polymer clay.  And the lucite rolling pin and clay slicer and… Okay, I stopped, sooner than later, because you could just keep investing in tools, and I had to think: did I really want to set up a studio and make lots and lots of things with polymer clay?

These days my tools for writing are pretty commonplace.  I have the laptop.  I have a notebook (for writing on the train).  I have the Compact OED, which weighs the earth and is the most expensive tool for writing I’ve invested in in a long while (okay, the laptop costs more, but I use that for everything in the world, not just for writing).  But I’m always on the lookout for new tools. It’s not that I expect a new tool to make me a brilliant crafter or writer or cook.  But a good tool can get you past some of the drudgery to the work you want to be doing. I’m all for that.