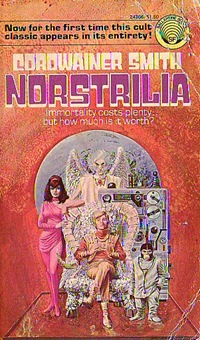 I never tracked science fiction in the form of magazine stories when I was young. I was denied many of the experiences I’ve read about, waiting with baited breath for the next [insert big name author here] story in F&SF or Astounding. Instead, I discovered authors in books.

I don’t recall discovering any of Cordwainer Smith‘s (a.k.a. Paul Myron Anthony Linebarger) stories at all until I accidentally found Norstrilia, his one and only SF novel, shortly after it was printed in 1975. I still have that book.

Norstrilia burst on me like a bomb. For me, it was one of Those Books that Changed Everything. I was no stranger to complex futures– I’d been reading Heinlein, after all. What made Norstrilia so different was the sheer strangeness of the world mixed with the completely odd way Smith told the story. Here’s a taste. These are the first few sentences of Norstrilia:

Story, place, and time–these are the essentials.

The story is simple. There was a boy who bought the planet Earth. We know that, to our cost. It only happened once, and we have taken pains that it will never happen again. He came to Earth, got what he wanted, and got away alive, in a series of very remarkable adventures. That’s the story.

Here I am, steeped to the gills in Asimov and Heinlein– scientific and engineering approaches to fiction. Now, Smith begins in simple language something much bigger. Much grander than those two. (It also didn’t hurt I had recently discovered Philip K. Dick.)

First, there is this odd bit of mythical wisdom that Smith brings to the prose. Smith didn’t prescribe an uniform future such as Asimov or Heinlein or others did. Many futures described by authors of the time were facets of known cultures– Asimov had his empires, Heinlein his libertarian democracies. They were, in part, utopian in that the cultures described had a definite fictional purpose and didn’t serve much beyond that purpose.

Smith’s future represented a broad and diverse culture that appeared to just happen, the long result of wars, interbreeding, genetic manipulation and different empires. There are some humans that have become transcendent. They wander through human culture as tourists. There are some that have attempted to retain 20th century values– but at a cost that makes the whole point of 20th century values essentially meaningless. It is as alien a culture as I have ever seen described in SF, regardless that it is inhabited only by human beings and their created siblings.

The second is the point of view. Norstrilia looks like a novel: there’s a plot, some characters, a sense of immediacy. I don’t think it is. I think Norstrilia is a myth restructured as a novel. This isn’t so uncommon, right? After all, we borrow from myths to make novels all the time. Zelazny’s Lord of Light is a good example.

Not quite the same, though. Lord of Light is a novel that borrows the trappings of a myth to tell its story. Norstrilia is a myth that borrows the trappings of a novel to tell its story. The feel of the novel is that this story is being told from some uncountable thousands of years after the story that became the myth actually happened and this novel/myth is a reconstruction of that story.

I know. This sounds abstract and mechanical. But Smith is not mechanistic. The book is just there for you to read. It’s all the little bits that come along with the story that eventually allow you to penetrate the masquerade.

There are issues with the book, of course. Smith was not a great prosist. There are points in the book that will make a strong man wince– notably near the end involving the Norstilian national anthem. But these are trifles.

I even got my son to read it.