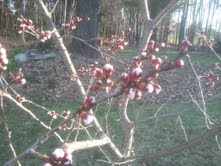 We live just outside of Boston. Everybody knows what’s been happening up here so I won’t go into it.

I usually like to take what’s happening in my life and spin it into something I can blog about it. Not this time.

So I’m going to talk about spring.

When I was a kid in California the direction of the seasonal winds changed. There was a little rain but mostly the weather was pretty much the same– which is why people like it out there. When we lived in Alabama it was mild relatively rainy winter followed by a warm spring and a brutally hot summer. Seattle was gray and dismal from October to April, lightening to haze in May until the sun finally broke through in June.

One of the features of living in New England is we have real seasons. Summers are warm and humid– sometimes pretty hot though nothing to compare to down South. Our falls are famous. Winter makes for ice skating. (“You mean it gets cold enough to walk on it?”) and skiing. Spring comes just about the point where you think you just can’t take winter any more and it’s time to move to Texas.

The cornelian cherries bloomed a week ago. The apricots are in full flower. The plum trees are about to open up in blossom and the apples are leaving out. True cherries will come out in the next week or two along with the peaches and the nectarines.

Spring is good up here.

Biologically speaking, spring is a compromise.

Every organism has a strategy it uses to exploit its environment. And by “strategy” I don’t mean a plan hatched in the dead of night by the glow of lanterns. I mean the life cycle by which the organism survives. Here in New England the winters are cold, the summers hot and spring signifies the winter to summer transition.

The trees I mentioned above are angiosperms (flowering plants) and deciduous. Evergreen trees don’t lose their photosynthetic organs (be they leaves or needles) but keep them all winter long. Both deciduous and evergreen trees are making a bet. Deciduous trees are betting they can photosynthesize so effectively when there is warmth and light to do so that they can afford to discard their light collecting organs at the end of the season and wait out the winter. Evergreens are betting they can get enough light to photosynthesize through the winter they can afford to keep their photosynthetic organs intact. Both groups make their bets and over time their statistical survival determines their success.

Up here most evergreens are conifers or similar sorts of trees– though there are a number of rhododendron imports around. Conifers are not flowering plants but gymnosperms, and old and venerable taxon that predate the angiosperms by a considerable margin. Gymnosperms evolved over 300 myears ago. Angiosperms about a hundred million years later. The “flowering” part of flowering plants came 100 myears after angiosperms and gymnosperms diverged.

The interesting thing about flowering plants is that by and large they use insects for pollination. But, as we know, evolution can’t plan. So, at some point there had to be an ancestral flower structure that was attractive to a predisposed insect. The result was so successful that flowering plants came to dominate the world. How did it happen? Darwin called it the “abominable mystery” and it was a very real threat to his theory of evolution.

Spring, therefore, has somewhat different meaning for flowering plants and gymnosperms. For the gymnosperm, it means an increase in metabolic rate that is sufficient to support reproduction. Hence the production of pine pollen in the spring. It is also a signal common to all of the local plants. If you’re pine tree A and you toss off your pollen into the air and pine tree B is asleep in the arms of Morpheus, you’ve pollinated the world for nothing. Spring, then, is not only an enabled opportunity for reproduction and photosynthesis, it’s a signal. Things can get interesting with variable weather. Start too soon and a local freeze can wipe you out. Start too late and there’s not enough time to produce. There’s a Goldilocks zone for all of this and it differs from species to species.

For an angiosperm, spring means all of this: metabolic opportunity and reproductive signal. But remember that angiosperms largely depend on insects for reproduction. Consequently, they have to incorporate not only the needs of their own species but the needs of a whole second phyla of animals that have completely different metabolisms.

You can see this in our yard. Some species (apples, for example) leaf out first and then blossom. The bet here is to get your production needs met first and then approach reproduction. Other species (such as cherries and stone fruit) operate in the opposite way. They put out flowers first and then leaf out. The apples are betting that the weather is going to be variable. Flowers are more vulnerable than leaves to frost so getting in some photosynthesis early doesn’t entail much risk. Waiting a bit is prudent. Peaches put out flowers first– get the reproduction started early. The bet here is that the weather won’t be variable in the spring and a late frost is a low possibility.

Peaches evolved in China and South Asia– a fairly warm climate. Some places don’t freeze at all– hence, while there might be a utility to being dormant there’s not much downside to putting out flowers as quick as possible. Wild apples (Malus sieversii), on the other hand, evolved in the mountains of Central Asia, places such as Kazakhstan and Northern Afghanistan– places not known for forgiving weather. Putting out flowers early would be foolish.

One could ask why make the deciduous bet at all? Why not keep leaves out all winter?

And some angiosperms do that– live oaks, for example. Rhododendrons. These are from milder climates. Also, pick up a rhododendron leaf and, say, a maple leaf. The rhododendron leaf is mighty. Thick and strong. The maple leaf as delicate as tissue paper. The rhododendrons make a bet that the cost of making a thick leaf is born out by getting enough photosynthesis during the winter. The maple dispenses with the cost of the thick leaf and puts all its energy into thin translucent leaf. Not so durable perhaps but very efficient at photosynthesis. Instead, the maple places its bet on dormancy. It’s so much cheaper to just go cold over the winter and barely live at all.

The most common ideas associated with Darwin are descent with modification with competition winnowing out the best strategy. This is true. But Darwin didn’t exist in a vacuum. Adam Smith’s “invisible hand” has a strong family resemblance to Darwin’s natural selection. But, like evolution, economics has two sides. Production and cost. Production has to be distributed, sold, etc. It would be the analogy of Darwin’s competition.

But the cost of production has a huge impact as well. Darwin recognized this. He saw that the cost involved in executing an evolutionary strategy had to be paid. The only currency in evolution is successful reproduction. Every time a rattlesnake strikes it risks breaking a fang. Every time a tiger pounces it risks an injury. Every winter a tree waits until spring it risks conditions that can be fatal.

Every spring is a bet.